If you like sponge cake and you like a creamy filling, you can’t go wrong with a tasty Twinkie. Twinkies are absolutely delightful and they are certainly one of the most popular snack cakes out there. Hostess sure knew what they were doing with these fun cakes.

You’ve got simplicity, tied with just the right amount of sweetness and flavor. It’s really the perfect snack. Now, you can find Twinkies in a ton of different flavors as well. Of course, we will get to all of those details in this guide!

Twinkies come from the infamous Hostess brand. Hostess has always been known for their snack cakes. Of course, they’ve had some changes over the years but they are still one and the same.

The original, classic Twinkie was first introduced in 1930. There’s why a story behind them. These little snack cakes were invented in Illinois, in a little town called Schiller park. The baker that made them was part of the Continental Baking Company.

Dewar simply wanted to put the machine to use so he came up with a little snack cake and filled it with banana cream. He dubbed his cake the Twinkie. The name Twinkie actually also has a fun story so we will talk about that in just a bit.

In the 1930s, bananas were readily available so that’s what Twinkies were made with. However, when World War II came around, bananas were no longer so easy to get their hands on. They were a rationed food item so Twinkie had to make a change.

It was then that the sponge cake went from having a banana cream inside to a simple vanilla cream. While they were initially concerned the change would hurt them, it turned out that the vanilla cream was actually very popular. In the 1980s, more than 50 years after Twinkies came out, they started experimenting with some additional flavors.

They had a lot of hit and miss with the specialty flavors and most of them never stuck around in the early years. It wasn’t until 2007, after a King Kong movie had the banana Twinkies in it, that they decided to try flavors again. They started with banana and it took off.

In 2012, Time magazine mentioned Twinkie as #1 on their list of iconic junk foods.

When Were Twinkies Invented?

Twinkies were originally invented in 1930 by James Dewar. James worked for a baking company and simply wanted to put a machine to use that had only been used in seasonal spurts prior to that time.

The original Twinkie had banana but they change to vanilla when World War 11 faced the company and homes with food rations and bananas were not so easy to get in bulk status.

Twinkies did experience an interruption in production for a very short time in 2012. Production was halted for a few months while Hostess Brands went through bankruptcy proceedings.

It is now nearing almost 100 years since Twinkies were first invented. They continue to be a popular snack cake and people seem to enjoy some of the new and specialty flavors that the brand introduces from time to time.

The additional flavor options are still fairly new and most of them are limited edition but you never know when they might decide to just keep a flavor around.

Twinkies were originally owned by Hostess Brands. Hostess always maintained ownership and they were known for a lot of different snack cakes. Twinkies were just one of their infamous treats.

In 2012, Hostess brands announced that they were filing for bankruptcy under Chapter 11. It immediately became a concern of consumers and even the company as to how they could possibly get their hands on their favorite snacks, including Twinkies.

Right on the heels of that is when Time Magazine listed Twinkies as the #1 junk food in their published article. Later in 2012, Hostess requested from the Bankruptcy Court permission to shut down operation. Twinkie production ended in the US in November of 2012 when that request was approved.

Grupo Bimbo’s Vachon Inc. of Canada, continued to produce Twinkies, as they held the Canadian rights to do so. They were produced and shared in many different countries in that time.

In March of 2013, Hostess Brands was purchased by Apollo Global Management and the production of Twinkies in the US began again. They were back on the shelves by July of that year. There were some minor changes to the snack cake but mostly a reduction in the overall size.

How Did Twinkies Get Their Name?

Twinkies were named after a pair of shoes surprisingly enough. The inventor, James Dewar, was drawn to shoes named Twinkle Toe Shoes. There was a billboard in St. Louis that caught his eye for the shoes and that led to naming his invented snack cakes Twinkies.

This makes for a fun story and we at least know where the inspiration for Twinkies came from. It’s always nice to have a little bit of background. 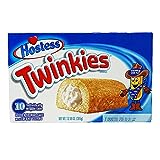 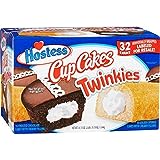 Originally, Twinkies were made with banana cream inside of them. During World War II, the cream was changed to vanilla and left that way. In 2005, there was a big push to bring back the banana flavor after a King Kong movie and then in 2007, Twinkie did just that.

They always kept the classic vanilla but over the years they have tried some other flavors and there are several flavors consistently available now. Here are some of the flavors.

People have also come up with interesting ways to enjoy and serve Twinkies. If you go to food stands and fairs, you just might come across deep-fried Twinkies. This is your classic Twinkie covered in batter and then deep fried.

There’s something about that concoction that is really delightful so it’s remained popular, particularly with fairs. That idea supposedly stems from the Texas State Fair.

The Twinkies cereal came out at the very end of 2020 and so far remains in production. It’s a twist on the classic vanilla Twinkie.

Twinkies are pretty easy to buy and available in several different countries. You can use the treat locator on the Hostess website to find Twinkies and any other Hostess treats you like. You can buy them in stores everywhere or online, it’s totally up to you.

You will find Twinkies available at most grocery stores and gas stations as well. Walmart is a popular place to find them but that is not the only in-store location. Of course, online you can use Walmart, Amazon, or plenty of other different online store options to get your Twinkie fix.

These snack cakes are readily available and quite easy to find. Despite their short stint of no production in 2012, they are on the shelves available to anyone who wants them.

Twinkies were originally invented in 1930 by James Dewar. James worked for a baking company and simply wanted to put a machine to use that had only been used in seasonal spurts prior to that time.

Twinkies come from the infamous Hostess brand. Hostess has always been known for their snack cakes. Of course, they’ve had some changes over the years but they are still one and the same.