Bit-O-Honey is a honey-flavored taffy candy bar that has almonds inside it. They are sweet, taste wonderful, and the honey adds something that is often not found in taffy candy bars. It is a nice change of pace from other taffy candy that tend to use chocolate in the mix, such as the Heath Bar. What is noticeable right away about this product is that the standard size Bit-O-Honey bar comes in 6 individual pieces. Mini Bit-O-Honey’s are also made. The bite-sized candy comes in small individually wrapped pieces, they often find their way into Halloween candy bags.

Bit-O-Honey, an American-made candy product, made its debut in the 1920s. This candy was made by Schutter-Johnson Company that was stationed in Chicago, Illinois. It is a unique type of candy bar that was made with six pieces of candy per bar. Each piece is made of a type of taffy that was honey-flavored, hence the name, and contains bits of almond scattered about throughout the taffy. It comes in a wax wrapper inside of another wrapper for the standard size bar.

The candy bar takes a while to chew, which may contribute to why it is loved by so many people. In fact, an advertising slogan in its commercials highlighted that “every bit of Bit-O-Honey goes a long way”. It is a unique and great-tasting taffy candy, the honey goes excellent with taffy, and offers something different from the usual addition of chocolate to candy products.

There are both large and small-sized varieties of this candy bar with the small-sized being bite-sized, so to speak. The bite-sized versions look a bit different from the standard size. These Mini Bit-o-Honey’s are just one piece, and it is slightly twisted in shape, they still taste the same, however, and also have almond pieces inside them.

Bit o Honey is often seen as being much like Mary Jane, another taffy candy that is produced by the company Necco. When 1969 came around, the Schutter-Johnson Company that invented Bit-O-Honey merged into the Ward Candy Company. The Ward Candy Company made many other different types of candies and sweets including Raisinets and Chunky, Oh Henry!.

Several spin-offs were introduced after the merger between Schutter-Johnson and Ward Candy Company. For a fairly short period of time and starting in the 1970s, the Bit-O-Chocolate was released which contained chocolate, unlike the Bit-O-Honey, but it did not stay on the market very long. Other types of candies similar were released such as the Bit-O-Peanut Butter and the Bit-O-Licorice. However, despite the wide disparity in the flavors of these new products, none of them became nearly as popular or well known.

Bit-O-Honey and the majority of the Ward Company’s other brand names were acquired by the Nestlé Company in 1984. Nestlé eventually sold the brand to the Pearson’s Candy Company, which is located in Saint Paul, Minnesota, in May of the year 2013. It appears that the Pearsons Candy company still owns Bit-O-Honey as of today.

The bars are a fantastic treat and are still widely available today, unlike most other classic candies that have vanished over the years. There is a reason that so many people claim these candy bars are the best candy they have ever eaten. 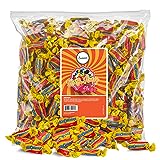 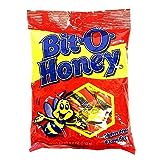 As of December of 2013, the ingredients are:

The year Bit-O-Honey Was Invented

Bit O Honey was invented in the year 1924. Since 1924, the brand has continued to survive in the competitive candy market and has also spawned a short-lived variation called Bit-O-Chocolate, that first was marketed in the mid-1970s.

The Company That Makes Bit-O-Honey

The Company That Invented the Bit-O-Honey

Nestlé then sold the rights to Bit-O-Honey to Pearson’s Candy Company. The story of many candies goes this way, with the rights to or the company’s themselves being bought by another. However, we all have the Schutter-Johnson Company to thank for the Bit-O-Honey originally.

The Location Bit O Honey Was First Made

Bit O Honey was first produced in the United States of America. and calls the city of Chicago, in the state of Illinois home. Over the years it became popular throughout the country.

Bit-O-Honey has come out with several commercials on television advertising bit of honey to consumers. An early commercial from the 1960s shows a man on a sunlit beach, playing the guitar and singing about Bit-O-Honey. The man on the beach sang how he took a bit of money and bought a “Bit-O-Honey”!

As he sang about the multiple pieces of honey that came with it, several people danced around him, mostly girls. The idea of the commercial was to focus on what the candy contained, its mood, and its quality. The commercial also showed Bit-o-Peanut Butter at the end of the commercial as well.

In 1977 Bit-O-Honey released a commercial with a circus act in it. The ring leader introduced a jumper to the crowd at the start of the commercial. The jumper was afraid to jump, so he said he would take the plunge as soon as he was done eating his candy bar. The idea behind the commercial was to highlight how Bit-O-Honey lasted a long time, due to the six-piece that it came with.

The marketing strategy behind the commercials is similar to the Marathon Bar. Both of these snacks like to highlight how long they lasted in most of their advertisements and commercials. Perhaps because to highlight how good of deal customers were getting, and even important aspect of sales in the past then it is today. There are many grandparents who keep their coupon saving habits of the past that can attest to that, and it sure comes in handy for saving some cash.

Where can I Buy Bit-O-Honey?

Bit-O-Honey can be hard to find in stores at times, with other snacks often taking space on the shelves. But there are some locations that sell it. Ordering Bit-O-Honey online can often get you good deals on Bit-o-Honey in bulk.

Stores That May Sell Bit-O-Honey

Here is a list of some stores may that sell the candy!

Many people can not, or should not, eat foods or snacks with gluten in them. The good news is it appears that Bit-O-Honey is gluten-free, so enjoy!
As always you should check several sources to confirm that a food item is gluten-free. We cannot be totally sure that all information we receive is correct or up to date.

Bit-O-Honey contains almonds in it, a type of tree nut, so if you are allergic to nuts you should avoid it. As always we strongly recommend checking the ingredients of any snack or candy before you eat.

A Story About Bit O Honey

The first time I had a piece of Bit-O-Honey was in the late ’40s. My mother gave me a piece of hers and an I loved it. Ever since then I would get the candy when we went to this store by my home. I will always eat this candy until I can’t eat it anymore