The Heath Bar is a combination of milk chocolate and toffee. It has been around since around the 1920s. It is a sweet and chewy candy that is somewhat hard and is made with 2 types of different types of confectionaries. You can find information about the Candy Bar here such as its history, where to buy the Heath bar, and when it was invented.

The Heath bar history – Its Story and general information

The Heath bar is a rather famous candy bar made of a combination of toffee and milk chocolate. It is said to be a legitimate American-made product. It was obtained by Heath brothers Bayard Heath and Everett Heath in the year of 1915, owners of a small confectionery business. The brothers brought the recipe that the Heath Bar was based on from a salesman.

The Heath Bar’s original name was first called “Heath English Toffee”, and this was later changed to the Heath Bar. It was originally given the marketing spin of being “America’s Finest”, with advertisements describing it as high quality. The Heath Candy Bar in its original carnation was first sold to the public around the 1920s.

In 931, The Heath brothers sold their first candy company and worked at their father’s dairy for a time. Eventually, the brothers started selling and marketing the Heath Bar on their father’s dairy trucks deliveries. The Heath Bar gained widespread success over time and the Heath Candy Company was born. The Heath Candy Company then grew large and wealthy due to the success of its product.

This wealth caused infighting and family ties became strained, leading to the eventual break up of Heath’s family company and its acquisition by a company called Leaf, Inc.  In the year 1996 Hershey obtained the rights to the Heath Bar when it acquired Leaf Inc.

The Heath Bar is a thin and hard slab of toffee in the middle of a layer of thin milk chocolate coating. The candy bar is now marketed under the Hershey brand and is similar to the Skor Bar. It has become a popular ingredient in cookies and other products. Especially for the ice cream industry. As it so happens, The Heath Bar spurred a bit of a revolution in the ice-cream industry. The candy Bar is very popular in the United States; a popularity survey in the year 1987 ranked the Heath bar in 56th place when people voted for the most popular snacks. that was nationwide, the Heath Bar scored as the 110th most popular snack in the US East Coast area.

During the Depression-era times, it started to grow in popularity. This was mostly due to the fact that the United States Army started to include the heath bar in soldiers’ rations. The popularity of the Heath bar grew after the war. Although the manufacturing process remained largely a hands-on, family-run operation at this time. All of L.S. Heath’s sons and daughters, 4 in total worked for the business. Even several of his grandchildren were involved in the business.

In the 1950s, the Heath Toffee Ice Cream Bar was introduced to the market. Later in the 1960s, there were some disagreements in the family, which led to the grandchild, Richard J. Heath, being expelled from the family business. Richard J. Heath several years later (1995) publishes a book entitled Bittersweet: The Story of the Heath Candy Co.

Afterward, the business was sold to a Finnish company, called Leaf, Inc. This was in the year 1989. After that, the health bar was then acquired by Hershey in the year 1996. Since Hershey’s acquisition of Heath Bar, Hershey has made several changes to its original recipe and design.

Nowadays, other types of Heath bar-based products have been dreamed up.  One example is Archway Cookies, another is the Heath Cookie. Other examples include the Dairy Queen Heath Bar Blizzard flavor. Some more examples of how Heath bar-based concoctions are the Heath Bar flavored styles of ice cream that have a coffee or vanilla ice-cream base. Such as the ice cream that used to be called Ben and Jerry’s Heath Bar Crunch. Of course, that was eventually renamed to be called the Vanilla Toffee Bar Crunch when the company ended up ending its use of Heath Bars.

What Is the Heath Bar?

Heath bars are a combination of 2 types of confectionary’s, chocolate, and toffee, combined into one single candy. It is sweet, and also hard yet chewy at the same time. Itr was invented long ago by a small company after they bought a toffee recipe from a wandering merchant. From these mysterious origins, The Heath Bar was born, a product that has been going strong for about a hundred years.

The Year It Was Invented

The Heath Bar was first invented in the year 1928. It was first marketed and sold under a different name around the 1920s, before being called the Heath bar we know today. That was almost 100 years ago! Since then it has gone on to become one of the longest and best-selling snacks in the world! No one knows if the candy bar will sell for another 100 years. It looks like time will tell on its potentially bright future.

Who Invented The Heath Candy Bar?

The Year The Heath Bar Was Invented

The Heath Bar was first invented in the year 1915. It was first marketed and sold under a different name around the 1920s, before being called the Heath bar we know today. That was almost 100 years ago! Since then the 30s candy has gone on to become one of the longest and best-selling snacks in the world! No one knows if the Heath bar will sell for another 100 years. It looks like time will tell on its potentially bright future.

The Company Who Makes It Now.

The company that now produces the Heath Bar is Hershey’s. Hershey acquired the rights in the year 1996. Hershey’s also produces many other popular snacks such as the Whatchamacallit and the Reeses NutRageous Bar. 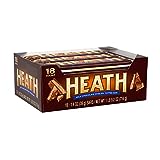 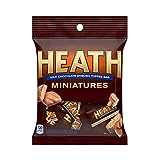 Many people are curious what is the difference between the Heath bar and the Skor Bar that Hershey’s made to compete with it.  Let’s take a look at some of the differences

Where you can find It In Stores:

Many people ask, “where can I find the Heath Bar?”  Here is a list of possible locations you can find it for sale.

This may not be all the locations, and some locations may no longer carry them.

Here are the ingredients:

Does It Contain Gluten?

The public has been assured that It’s Gluten Free. This has been confirmed on the Hershey company website.

Does Heath Bar Have Nuts?

The Heath Bar does contain nuts in its ingredients. It has almonds in it, a type of tree nut. Also, it is processed In a facility that may expose it to other types of nuts, peanuts, etc. It is best to avoid the bar if you have any type of nut allergy, and as always read the label carefully.

Is The Heath Bar Healthy For You?

The name Heath is surprisingly similar to the sound of health, but is the Heath Candy Bar really good for you? The answer would be not really, but they do taste pretty good. It has a fairly high amount of sugar in it, comparable to a can of soda. It is also rather lacking in nutrients, and other nutrition values.

Making Your Own Version:

Here is a little recipe for making your own Heath Bars that come out similar.

In order to make your own little version, use the following ingredients and equipment. You can play around with what you put into it to try new variations!

What is a Heath bar?

The Heath Bar is a combination of milk chocolate and toffee. It has been around since around the 1920s. It is a sweet and chewy candy that is somewhat hard and is made with 2 types of different types of confectionaries.

What is in a Heath bar?