If you love chocolate and toffee, you will love the Skor Bar. This is a really unique candy bar because it is so simple and many people love that you don’t have a lot of included ingredients that would normally be added to other candy bars. Skor comes in regular and King size bars and has been popular since the 80s.

This candy bar is familiar to both Americans and Canadians and is often compared to the Heath Bar. This is because the Skor Bar was made to compete with both the Heath Bar and the Daim Bar. This has been an equally popular candy bar as it turns out and Skor Bars have their own following.

Skor bars were made to compete with Heath Bars and the Daim bar. The Skor Bar is made with a thin slab of butter toffee that is wrapped in milk chocolate. This candy bar was first sold in the US in 1981 and then it was transitioned for sales in Canada in 1983.

Skor means shoes in Swedish but Skor with the correct marks over the O means brittle. This is probably why the name of the bar stands out so sharply on the wrapper and the O is made to stand out so clearly with its internal crown. The candy bar is brittle and a little snappy, so this is clearly what the name was intended to be and the bar was not made to be named after shoes.

While the umlaut is not placed over the name of the candy bar on the wrapper, those who speak Swedish would probably realize what is intended with the name. The pronunciation is something else altogether and you will probably hear this bar’s name pronounced many different ways. The correct pronunciation is said like the “u” in fur.  This is different from the native English-speaking inclination to pronounce the name like store or bore.

This candy bar having been made to compete with Heath Bar is a really interesting part of the history of this product. When Hershey bought Leaf Candy Company in 1996, they also acquired the Heath Bar. This should have created conflict, but it seems that the two candy bars were never really viewed as competitors by consumers. Hershey still makes both of these candy bars and they have not changed either of them in any significant way.

The Skor Bar is thinner than the Heath Bar but that is the biggest difference between the two bars. They are actually really similar but for whatever reason, the two bars seem not to impact one another’s sales. Hershey probably felt like they could part with either of them but never had to make that choice.

Heath Bars have been around since 1914 and they are a more traditional bar. They are thicker and have more chocolate on them. This was largely because the era when they were made was the era before refrigeration was a reality. This meant that the layer of candy on the outside of the bar had to be thicker so that it could melt slightly if the weather was hot.

This is probably part of why the two bars are not connected too closely in people’s minds. The Skor Bar is thin and snappy and crispy. The Heath Bar is thicker and more traditional. This is a key difference between the two bars and it definitely makes them have their own markets.

The Skor Bar is sold with a dark brown background on the wrapper. The lettering of the name is done in a dark red and there is a little gold crown in the center of each O. The back states that Hershey makes the bars and there is an image of the candy bar on the front.

This is the way that the bar has been marketed almost from the start. This makes it really recognizable to people who have loved these bars from the beginning. This is a very standard Hershey bar type of wrapper which also makes this candy really interesting to people who know what Hershey stands for. Skor fits right into the Hershey stable with ease and the bar design is so classically Hershey.

Hershey wants everyone to connect this candy bar with opulence and a refined taste profile. This is one of the key differences between basic candy bars and this bar. The thin and crispy nature of this candy is connected more closely with fancier candies so this does bear out. The crown and the other décor elements are also intended to communicate this idea.

Most people state that the toffee in the Skor Bar is better than any toffee that is included in other candy bars. There are also people who state that the milk chocolate is richer and tastier than in other candy bars. This might partially be due to the fact that there are no other ingredients in the center of the bar. The candy needs to speak for itself and this has always been a key feature of the Skor Bar.

Toffee in other candy bars is usually sort of an afterthought, but in the Skor Bar it is the central flavor of the whole bar. This is why people who adore toffee are so in love with the Skor Bar. If you want a crispy candy bar that tastes really amazing, this is the right choice to make. Even if you don’t love regular toffee, you will like this candy bar because the toffee is so tasty. 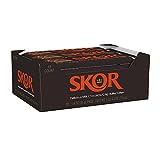 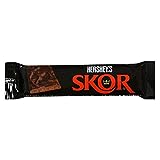 You can also buy Skor Bars at Old Time Candy by clicking the image below.

From the Amazon entry:

This is a simple candy bar and you will have the same ingredients in both sizes of the bar. There are no other varieties of this bar that would have other ingredients.

Comparison Between the Heath Bar and Daim Bar with Skor

Daim looks much more like the Skor Bar and the crispiness is a little more similar. The Daim bar is really successful in Sweden and it was sold in the US under the name Dime bar. Kraft bought the Daim bar in 1993 and they have not changed it much since.

People who love the Heath Bar and Skor Bar will often stick with these two bars when offered the choice between these and the Skor bar. Skor is often the favorite of the two since the toffee inside the Skor bar is so much crispier and more flavorful. Chocolate lovers might come down on the side of one of the other two bars but toffee lovers will always pick the Skor Bar.

The tale of these bars being in competition with one another was a short-lived one. Consumers really don’t connect these candy bars as being similar enough to compete with one another. They are alike in some ways but the flavor choices between them are unique enough that these three candy bars are no longer sold as competitors.

Most of these ads mention the “taste of Sweden” which was more relevant at the time that this candy bar was first being sold. Swiss candy and Swiss chocolate were very popular at the time and were thought to be of higher quality than anyone else’s. This might still be the case in some instances, but candies are made in many other places that are just as good these days.

The ads in the 80s focused on indulgence as well and made sure that you knew that you would put everything else on hold to be able to enjoy these candy bars. This was a big driver for all kinds of candies at this time and the sense of chocolate being opulent was sold for most brands in one way or another. It seems a little silly now to think of candy as opulent in most cases, but in the 80s and into the early 90s, this was a common way to sell candy products.

Another older ad for the candy: