There’s no denying that the rainbow-colored, gelatinous sweets most of us first came to know and love are “gummy bears.” They are one of the most well-liked confections in the entire world. All can agree that they are amazing treats, regardless of whether you call them “gummy” or “gummi,” or prefer bears or worms.

So, here you will find all the facts about the delicious sweet gummy bears.

Hans Riegel, a German confectioner, came up with the idea of creating a line of fruit-flavored, soft candies in the form of a bear. These candies are now referred to as gummy bears. During a rise in demand following the war, Riegel introduced his sweets to a larger European market in 1960.

Hans Riegel Sr. was born on April 4th, 1893. The story of this bear began in 1920 when Hans Riegel Sr., a businessman, and confectioner, started producing chocolates and other candies out of his modest Bonn house. Previously, Hans Riegel Sr. worked for a neighborhood confectioner in Germany, but he got disinterested in his job because he yearned for something to call his own.

To venture on a new adventure, Riegel and his wife, Gertrud, launched their own business in 1920. While his wife rode her bike across the town, distributing and selling the delicious and sugary candies to the locals, Hans Riegel, Sr. assumed the position of the principal confectioner.

Little did the Riegel family realize that when Hans Riegel Sr. created the bear-shaped gummy candy known as Gummibär or the gummy bear, what had initially been a failing company would quickly turn into a flourishing enterprise.

This confection was historic since it was the first time fruit flavors had been blended with sugar, natural gum, or gelatin. The fruity chewy candy quickly became a favorite of both kids and adults because of this combination of ingredients. While gummy sweets like Turkish delight (made with starch) and Japanese rice candy (made with rice) existed before Hans Riegal Sr. In fact, it was his creation of the gelatin-based gummy that gave rise to the enormous popularity of gummy bear candy.

The firm of Hans Riegel Sr. had relocated from his house to a factory with 160 employees by the 1930s. The family-owned business now employs over 7,000 people globally and manufactures more than 100 million bears per day. This figure continues to rise every year. Riegel ran the candy company Haribo until 1946.

By the end of World War II, Riegel sold all of his confectionery businesses to the American people. The well-liked gummy treat entered the American market in 1982 and has been available at Land of the Gummies ever since. His initials and surname, as well as the name of his hometown, were combined to create the name Haribo.

Gummy candies are sometimes credited to Riegel. However, he was only extending already published recipes from other nations. Gummy bears predate certain gelatin-based chews that were first produced in Great Britain in 1909, but no other gummy candy had the same adorable bear design.

Where Was Gummy Bear Invented?

Germany was the birthplace of the gummy bear in 1920. At first, Hans Riegel and his wife sold them to customers, and Gertrud transported them by bicycle. Riegel bought his first delivery van in 1923.

Gummy bears have a distinctive marketing approach that appeals to the inner kid in all of us, making their candies popular with individuals of all ages. In the UK, this is accomplished by casting adults in television ads who speak in a child’s voice when discussing gummy candy.

In the beginning, gummy bears were known as Tanzbären or dancing bears. Their gummy bear was nicknamed Golden Bear in 1967. This is due to the unattractive fact that gummibar’s actual meaning is “rubber bear.”

The ingredients and form of gummy bears gave them their moniker. They were first created from gum or gelatine and molded into bears that were modeled after the bears that performed on the streets of European festivals.

Strawberry, lemon, orange, pineapple, and raspberry have historically been the flavors of gummy bears. The flavors remain unchanged. 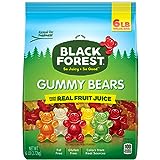 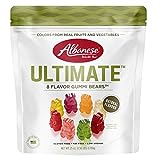 You can also buy Gummy Bears at Old Time Candy by clicking the image below.

Variations And Flavors Of Gummy Bears

German for “gummy bear,” these little fruit gum sweets are sometimes compared to jelly babies in English-speaking nations. The candy has a bear-like shape and is around 2 cm (0.8 in) long. The famous gelatin-based candy known as gummies comes in a wide range of forms and colors, including the gummy bear.

Gummy candies in the shapes of worms, rings, snakes, frogs, oranges, cherries, hamburgers, sharks, hippos, penguins, Smurfs, peaches, octopuses, apples, lobsters, spiders, and Ampelmännchen. They have all been produced as a result of the popularity of gummy bears. A variety of sizes are available from the manufacturers. The size can be tiny or as large as gummy bears that weigh several kilos.

Gummy bears are most frequently marketed in five flavors and the same colors in the United States. However, the red bear’s taste is strawberry, while the green bear’s flavor is lime, and the colorless bear’s flavor is grape.

A lot of businesses copy the flavor and color combinations found in Haribo. Health-oriented businesses occasionally choose more diverse tastes, even if they frequently utilize all-natural flavors. The flavors of Gummy Bears also include lemon, pineapple, strawberry, raspberry, orange, and many more.

A combination of sugar, glucose syrup, starch, food coloring, gelatin, flavoring, and citric acid is used to make the classic version of a gummy bear. However, there are a variety of recipes, including those for organic confectionery, vegetarian recipes, and recipes for people who must eat according to their religion.

A starch mogul, a specialized machine, is used during the production of gummy bears. A tray containing powdered starch is imprinted with the picture of the bear. Indentions in the starch are filled with the heated liquid mixture, which is then left to cool overnight. The candies may be taken out of the mold and packed once the mixture has hardened.

Only the bear’s front is made since the molds are open on top. The bear’s rear is left flat. Each candy’s original design is hand-carved into plaster by an artist, which is then mechanically replicated to make the starch molds used in manufacturing.

Vegetarians and vegans should avoid eating gummy bears prepared with gelatin from animals such as cattle, pigs, or fish. These foods do not follow the Kashrut or Halal dietary rules if they include porcine gelatin. Haribo manufactures halal bears and other treats made from bovine gelatin in its plant in Turkey. Additionally, certain gummy bears may be consumed by vegetarians since they are produced without gelatin using pectin or starch.

Large sour gummy bears have a softer texture, are bigger and flatter than conventional ones, and contain fumaric acid or other acidic substances to give them a sour flavor. Some producers make sour bears with a distinct texture that is based on starch rather than gelatin. In contrast to gelatin, starch typically results in a less chewy, cleaner bite and texture.

Haribo’s gummi candy, known as the “original gummy bear,” has been titillating our taste buds for almost 100 years!

The colorful gummy bears from SmartSweets have just 4 grams of sugar per bag and are jam-packed with raspberry, apple, lemon, and peach flavors. They primarily rely on natural sugar substitutes, including allulose, monk fruit, and natural fruit juices.

You never know what you’re going to receive in life, just like in a bag of gummy bears. This is particularly true of the five-pack of Albanese gummy bears, which are packed to the gills with 12 distinct tastes in each sweet, soft, and chewy mouthful.

The luscious varieties of Brach’s Gummy Bears, which are made with actual fruit juice, include cherry, orange, lemon, and lime. We enjoy adding a handful of these fruity little bears as a  delicious topping to our frozen yogurt.

Trolli Sour Brite Crawlers are gummy worms that are perfectly balanced between sweet and sour in every mouthful. They are wrapped in a tongue-twisting bliss of sugar. Cherry-Lemon, Strawberry-Grape, Orange-Lime, and other flavor combinations are among those offered in the Original flavors.

Sure, chocolate bars continue to be the most popular sweets sold worldwide, but how many cocoa-based snacks were the inspiration for a popular 1980s animated TV series and a song with over 45 million views on YouTube?

Gummy Bears have undoubtedly loved snacks and have kept their popularity for decades. Children especially enjoy their chewy, sweet and fruity texture. Above, we explored the history and origin of those delicious snacks and learned more about them.

What are Gummy Bears made of?

The traditional gummy bear is made from a mixture of sugar, glucose syrup, starch, flavoring, food coloring, citric acid, and gelatin.

How are Gummy Bears made?

Gummy manufacturing uses a starch molding process. First the candy is made, then it is filled into starched lined trays. The filled trays are then cooled overnight and the resulting formed candy is emptied from the trays.

What flavor are white Gummy Bears?

When were Gummy Bears invented?

HARIBO invented the gummi bear in 1922.

HARIBO invented the gummi bear in 1922.

How many Gummy Bears in a bag?

Where are Haribo Gummy Bears made?

How much sugar in Gummy Bears?

Gummy bears are almost all sugar. A serving of the average gummy bears, which is about 17 or 18 pieces, contains between 21 and 22 grams of sugar. That amount of sugar is equal to between 5.25 and 5.5 teaspoons of sugar.