Cocoa Pebbles is a sweet, crispy rice breakfast cereal with artificial and real cocoa flavoring. Add milk, and you soon have a bowl of crunchy cereal swimming in tasty chocolate milk to start your day.

Cocoa Pebbles and its partner breakfast cereal Fruity Pebbles were the first to be created around existing cartoon characters, specifically Fred and Barney from Hanna-Barbera’s famous cartoon “The Flintstones.” Other cereals had famous mascots that came to life and became quite famous in their own rights. But Cocoa Pebbles was specifically designed as a TV show-breakfast cereal collaboration.

The cereal was first introduced on the West Coast in 1969, and some in the Post company did not have high hopes for the product. In fact, some insiders predicted it wouldn’t last a year. Boy were they wrong. Cocoa Pebbles was a such a hit on the West Coast that Post soon began to distribute the cereal nationally in 1971. To this day, Cocoa Pebbles is one of Post’s best-selling cereals.

Evolution of the name

The “Pebbles” in Cocoa Pebbles came directly from the cartoon. Pebbles is the daughter of Fred and Wilma Flintstone. But Cocoa Pebbles wasn’t the first name for the cereal. Post had a cereal called Sugar Rice Krinkles that was not particularly popular with children. Post executives decided to reintroduce the cereal with a new look and promotional plan. Bring in the Flintstones.

The original names for the reimagined cereals were Flint Chips and Rubble Stones. “Flint” was for Flintstones and “Rubble” was for Fred’s best friend, Barney Rubble. While those names had potential, the creative head for Post suggested a switch to Cocoa Pebbles and Fruity Pebbles. Those names stuck.

Though the marketing approach was a huge shift from Sugar Rice Krinkles to Cocoa Pebbles, the process for creating the cereal didn’t change much. Post used the existing expander process and production facilities for Pebbles as they used for Krinkles, but they experimented with several flavor profiles before deciding on the recipe for Cocoa Pebbles. Always top of mind was delivering a breakfast cereal flavor that met the expectations for children and adults who were fans of The Flintstones. Once Post struck just the right flavor and texture, they stuck with it. The recipe has endured largely unchanged since its inception.

One adjustment was made to the recipe after about 2010, a time when many cereal makers were coming under fire for the sugar content in cereals marketed to children. Post reduced the sugar content from 12 grams per serving to 9 grams. They also created a version touting a more chocolatey flavor, but the formula wasn’t significantly changed otherwise.

Commercials for Cocoa Pebbles looked very familiar for fans of “The Flintstones” cartoons. In the beginning, the spots would show animated Fred and Barney interacting with real children, usually at a kitchen table. In the mid-1970s, campaigns began to be more plot-based, with Fred and Barney in familiar Flintstone locations, such as Bedrock, and sometimes featuring the characters’ wives, Wilma and Betty.

One common plot: Fred freely enjoys his Cocoa Pebbles while Barney is left hungry, pining for a spoonful of those sweet, crunchy nuggets. Barney tries all sorts of shenanigans to distract Fred, including wearing disguises, to get his hands on a bowl of his favorite breakfast. Typically, Fred catches on after Barney has a few bites because Barney isn’t exactly quiet about his enjoyment of the cereal and quickly blows his cover. As Fred gets angry and tries to get his bowl back, typically exclaiming, “Barney, my Pebbles,” Barney quips a line such as, “Hate to eat and run,” and gives chase. These commercials usually end with a favorite slogan, “They’re Yabba-Dabba-Delicious!”

In 2009, commercials began to feature other members of the Flintstone and Rubble families. Fred and Wilma’s daughter Pebbles and Barney and Betty’s son Bamm-Bamm became part of the Cocoa Pebbles advertising campaigns, and Bamm-Bamm got a cereal of his own. Commercials for Bamm-Bamm Berry Pebbles put a spin on the Fred-Barney bowl battles. When Fred exclaimed, “Barney, my Pebbles,” Barney corrects him: “My Bamm-Bamm Pebbles!”

A new slogan was added in about 2010, and the animation changed from the classic cartoon look to a stop-motion style. The new tagline, “Rocks your whole mouth” emphasized the flavor and texture of Cocoa Pebbles.

In 2014, Post followed the trend in the cereal industry to shift their focus from advertising to children to expanding to include ads aimed at adults. Post’s approach was to amiably pit its main Pebbles cereals – Cocoa Pebbles and Fruity Pebbles – against each other in their commercials. These ads don’t feature Flintstone characters. They show children picking a team (Cocoa Pebbles or Fruity Pebbles) and touting why they are loyal to their side. The commercials also feature celebrities such as Shaquille O’Neal, as mascots. While The Flintstones characters are no longer in the television commercials, they are still featured on the packaging for the cereals, remaining a key marketing component.

The Flintstones characters in Post’s commercials for Cocoa Pebbles were voiced by the same actors in the popular television cartoons. Alan Reed voiced Fred Flintstone, and Mel Blanc was the voice of Barney Rubble.

Alan Reed’s birth name was Herbert Theodore Bergman, and he was sometimes credited in his acting work as Teddy Bergman. For the Flintstones role, he was Alan Reed, and he played Fred Flintstone for the entire six-year run of the series. In addition to being a voice actor, Reed/Bergman also acted in films including, “Days of Glory,” “The Tarnished Angels,” “Breakfast at Tiffany’s” and “Viva Zapata.” He was also featured in radio and theater productions.

Mel Blanc was an icon in the voice acting industry. His nickname was “the man of a thousand voices.” In addition to voicing Barney Rubble for the television show and Cocoa Pebbles commercials, he was Bugs Bunny, Daffy Duck and Mr. Spacely from “The Jetsons.”

Blanc was the first voice actor to get screen credit for his work, and his fight for that acknowledgement paved the way for voice actors and the work they do. Today, voice actors generally receive the same credit their live-action counterparts receive. 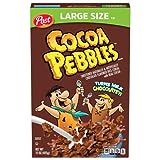 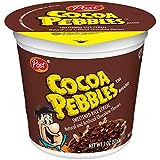 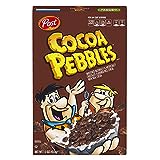 Pebbles come in many flavors, some a spin on Cocoa Pebbles and others a variation of Fruity Pebbles. Some varieties on the market:

Post is not afraid to try new things. Just take a quick look at all the Pebbles varieties that have been introduced, some for just a year, others for several years.