Fruity Pebbles is a colorful, crispy rice cereal originally marketed with fruit flavors including orange, lemon and tangerine. The Post cereal company introduced Fruity Pebbles and Cocoa Pebbles at the same, and they were the first cereals to be created based on a television series. The show that inspired these popular cereals was none other than “The Flintstones.”

The flavors and colors of “Fruity Pebbles” have been tweaked over the years. The first change was to replace tangerine with cherry fruit flavoring. Post added purple in 1985 and green debuted in 1987, “Berry Blue” came along in 1994, and “Incrediberry Purple” joined the cereal box after that. “Bedrock Berry Pink” was added in 2005.

“The Flintstones” connection to Fruity Pebbles and Cocoa Pebbles started before the cereals were created. The Post cereal company set out to develop a product based on the characters in the Hanna-Barbera cartoon, specifically Fred Flintstone and his best friend Barney Rubble. Fruity Pebbles got a limited West Coast release in 1969. Much to the surprise of some doubters at the Post company, the cereal was a success in the market, and by 1971 it was being sold nationwide. Fruity Pebbles remains a top-seller in the Post cereal lineup.

When the cereal was in development, the plan was to create a texture similar to an existing product called Sugar Rice Krinkles, a breakfast cereal with a mediocre performance. Executives knew they wanted a direct tie to “The Flintstones,” but they didn’t hit on Pebbles right away. The first working names for Fruity Pebbles and Cocoa Pebbles were Flint Chips and Rubble Stones. “Flint” was for Fred Flintstone, and “Rubble” was named for Barney. Before the cereals were released, Post’s creative team came up with Pebbles, a connection to “The Flintstone’s” via Fred and Wilma’s daughter Pebbles.

While associating Fruity Pebbles with “The Flintstones” was a big marketing change from the existing Sugar Rice Krinkles cereal, the process for creating the product was similar. Post used the same expander process and the same factories to make the new cereals. The flavor and color profiles were the big difference. For Fruity Pebbles, the bright colors and citrus and berry flavors set the cereal apart. Cocoa Pebbles were created at the same time with a simpler approach: All chocolate all the time.

With both varieties of Pebbles, the goal was to develop flavors that would be appealing to fans of the famous prehistoric cartoon that graced all of the marketing and advertising materials. Once those flavors were tested, tried and set, Fruity Pebbles and Cocoa Pebbles were released, and two iconic brands were born.

Fans of “The Flintstones” certainly found commercials for Fruity Pebbles familiar. They even seemed like little cartoon shows of their own, though in the beginning, the animated Fred and Barney interacted with live children, most often around a kitchen table. In the 1970s, the advertising approach changed to be more like the TV show, with animated Fred and Barney playing out a familiar theme.

Fred would be happily enjoying a bowl of Fruity Pebbles, while Barney stood by, wishing he had a bowl of the cereal, too. In an attempt to get his hands on Fred’s cereal, Barney would come up with elaborate diversions, often donning disguises, to distract Fred. Barney’s plots usually worked – for a minute or two. Barney could not contain his enthusiasm, and would blow his own cover, prompting Fred to chase after Barney to get his cereal back. These commercials included Fred’s famous line, “Barney, my Pebbles!” Barney would often quip something like, “Hate to eat and run” as he took off with the bowl. They almost always ended with one classic line: “They’re Yabba-Dabba-Delicious!”

The fully animated commercials were often set in familiar locations from “The Flintstones’ show, including Bedrock. Starting in 2009, stop-motion animation replaced the classic cartoon look, and  commercials for Fruity Pebbles began to incorporate other characters, namely Wilma Flintstone and daughter Pebbles and Betty Rubble and son Bamm-Bamm

Eventually, a cereal centered around Bamm-Bamm Rubble was created. Commercials for Bamm-Bamm Berry Pebbles put a spin on the famous Fred-Barney battles for bowls of breakfast cereal. When Fred exclaimed, “Barney, my Pebbles,” Barney corrected him: “My Bamm-Bamm Pebbles!”

Like many cereal companies, Post made the decision to shift marketing efforts from focusing primarily on children to developing marketing that would appeal to adults. Post did this by creating a bit of competition between Fruity Pebbles and Cocoa Pebbles, suggesting that consumers decide if they were Team Fruity Pebbles or Team Cocoa Pebbles. Commercials featured actors and athletes as team leaders rather than the Flintstones characters. The cereals did not lose their connection to their original characters, though. The Flintstones were still the primary focus on Fruity Pebbles packaging.

The Flintstones characters were voiced by Alan Reed and Mel Blanc, the same actors who voiced the characters in the popular television series. Reed was the voice of Fred Flintstone, and Mel Blanc voiced Barney Rubble.

Alan Reed was born Herbert Theodore “Teddy” Bergman, and he was credited by both names during his career. Generally speaking, he went by Reed for comedic roles and by Bergman for dramatic parts. He was Alan Reed for the Flintstones role, and he played Fred Flintstone for the entire six-year run of the series. In addition to being a voice actor, Reed/Bergman acted in films including, “Days of Glory,” “The Tarnished Angels,” “Breakfast at Tiffany’s” and “Viva Zapata.” He was also featured in radio and theater productions.

“The man of a thousand voices,” aka Mel Blanc, was an icon in the voice acting industry. He was the first voice actor to get screen credit for his work, and this paved the way for voice actors from that point on. Today, voice actors generally receive the same credit their live-action counterparts receive. 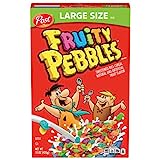 Some varieties of the Fruity Pebbles and Cocoa Pebbles were limited-edition, experimental or just for fun. Below is a list that have been on the market in the past and have since been discontinued.