This is not a product that many people will talk about, and there might even be a few people that will not believe you that this product ever existed. This is one of the stranger food products that has ever been sold, and the color and appearance might have more to do with the fact that this product was originally marketed as a rubber substitute rather than a gum.

If you ever tried Black Jack gum, you might be aware that it was an odd color, but you might not know that the product has been around since the late 1800s. This strange gum was actually sold for many years despite its odd appearance and the unique reason for its creation. You can even source Black Jack Gum today from a short list of sellers if you want to see it and try it for yourself.

Black Jack Gum is black in color and is flavored like anise. This flavor profile is unique and more familiar to licorice and baked goods these days. At the time that Black Jack Gum was first sold, anise flavoring was used in many products and for medications to mask harsh flavors. The current maker of the product is Gerrit J. Verburg Co. This gum actually came about because of a common use of Mexican Chicle in the late 1800s.

In 1869, the exiled Former Mexican president and general Antonio Lopez de Santa Anna, had moved to New Jersey. He had brought along Mexican Chicle in the hopes that he could sell it for some money. This was not a product that was familiar to Americans at the time, and there was a market for rubber products of all kinds in the US during this period.

A Thomas Adams of New York first witnessed the Mexican president chewing on what he called Chicle late in 1869. He decided to purchase the product to sell as a rubber substitute, but when he found out that the Mayans, and now modern-day Mexicans used the product for chewing on, he had an idea. He took a small batch of the rubber product and boiled it in his kitchen to change the consistency to make chewing gum.

Chewing gum was a new idea, although cure-alls and other kinds of medications that were not really medicine were quite common. Nerves were discussed often during this period, and women and men alike were always looking for things to calm the nerves. The idea of a portable substance that might help you to break bad habits or to fend off hunger or desire for a drink or a cigar was intriguing to Adams.

When the local store that took on his first batch of the product reported that it had all sold, he started making more. By 1871, Adams got a patent for a gum-making machine and started mass production of this product. He flavored the first batches with sarsaparilla. He then started to add licorice flavoring in 1884. When the licorice flavor was added, the color of the gum changed to black. This was the first time that the product was named Black Jack Gum.

This gum was also the first product of this kind to be sold in sticks. Many people are not aware that this was the initial gum product to be made in this now-familiar way. The original ad campaigns also focused on the product’s benefits for the throat and for health as well as for calming the nerves. There were many products on the market at this time that were sold as cure-alls rather than being marketed as enjoyable candy or food products. The era of snack foods had not yet arrived, so most gums and candies were really only sold as a means to improve one’s health rather than as items that were enjoyable to eat.

The connection between ceasing to smoke and chewing gum was probably originally coined when this kind of product entered the market. Gum chewing was originally marketed as a means to calm the nerves and help to get rid of nervous behaviors like smoking. This might not be a great success for most smokers who want to quit the habit, but the cure-all market has spent many years encouraging people to try one solution after another to make smoking a thing of the past. In the case of Black Jack Gum, there were so many purported reasons to use this gum for your health that quitting smoking might have been low on the list.

Black Jack Gum was sold to the American Chicle Company in 1962 and then the brand was renamed Adams in 1997. Pfizer then bought out Warner-Lambert and also Adams products. The brand was sold again to Cadbury in 2003. This is now a company that is called Cadbury Adams. In 2019, Gerrit J. Verburg bought Black Jack Gum and several other products from Cadbury. This is the current owner of the product.

Black Jack Gum remained on the market until the 1970s and then was revived in 1986 and 2019 with limited success. Black-colored foods are not very popular these days and the flavor profile is not one that is very popular with modern gum consumers who are used to fruit-flavored gums or gums that are minty in nature. The product is still sold in limited circles and you can buy it if you do want to try it. There are many vintage candy stores that offer access to this classic chewing gum, as well as online sellers that will make sure that you get to try a stick of licorice-flavored gum if you wish.

This gum has been mentioned a lot in popular culture, being mentioned in an episode of Seinfeld, in Boardwalk Empire, on Sanford and Son, on Homeland, and even in Rage by Stephen King. There have been other more recent references to the product as well despite the fact that most people watching will not know what is being referred to. This was a popular enough gum product that most people of the right age are aware that it was licorice-flavored and black in color. Younger audiences, however, will likely not be aware of the existence of licorice gum.

There are still a few sellers that offer this gum to those who really enjoy licorice products. This is a very niche market and not one that has led to Black Jack Gum making its way back onto the shelves of stores. You will find that Amazon and a few other sellers can give you access to this vintage gum if you want to give it a try. 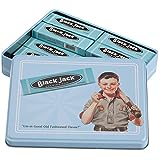 You can also buy Black Jack Gum at Old Time Candy by clicking the image below.

From the Amazon entry:

There is also a note that this product contains soy. There are no other flavor variants for the product, so you will not find that there are other versions of the gum with different ingredients in them. This is one of the simplest gum products on the market anywhere and the simple nature of the product dates back to the original recipe. This is not a product that has changed much over the years and those who tried Black Jack Gum in the 70s would probably feel that this current version of the gum is exactly the same as they remember.

One of the things that is fun about buying some of this vintage chewing gum and trying it out, is that the packaging is still so loyal to the original design. The product comes in small foil packets that are bright blue with a central black oval in the middle. The logo is in the center of the oval and states clearly that this is Black Jack Chewing Gum in white letters. There is not much more to the packaging than this, and the delightfully vintage design is really special.

There are so few candies or other food products that are made with such simple product designs these days. Today, most gum products are often advertised with bright colors, small images of fruit or cartoon characters, and lots of information about the food item that is inside the wrapper. The Black Jack Chewing Gum wrapper is simple, stripped-down, and does not explain what you are buying at all. This is how candies and foods used to be sold, and you would have had to pick up a pack to find out what all the fuss was about.

Those who pick up Black Jack gum today will already be aware of what they are buying since it is so hard to get. The mystery might be gone, but the delightful marketing materials have not changed at all. This is a classic food product through and through, even today.