The NutRageous candy bar is the perfect balance of sweet and salty. The chocolate on top of the peanut butter caramel center is hard to resist. And hey, how can you resist this bar when it’s a really great source of protein and you can enjoy it anytime?

Nestle is a company that was founded in 1866 by Henri Nestlé. The goal of the corporation has remained the same since which is to provide quality food products for chocolate enjoyment worldwide.

In 1994, they introduced their newest chocolate candy bar: NutRageous! From then on it has always been a popular candy bar, although it is harder to find now.

Today, the company is still thriving and producing popular favorites such as Butterfinger and Baby Ruth. Their candy bars are sold in over 100 countries around the world!

The candy bar is a version of Reese’s and was somewhat designed based on the Reese’s. Now, you will see them labeled in the same orange packaging and stamped as “Reese’s NutRageous”. The actual year of production was 1994 for this delicious treat.

Initially, NutRageous was actually named Acclaim but that name never made it to full production. Before the company officially released the candy bar, they had some focus groups and the NutRageous name and branding went over much better, especially with children. So NutRageous is what the candy bar became.

There have been some variations of the bar since it was originally released and it’s not exactly the same as it was. However, it’s always gone back to the initial variety because that’s what people look for. We’ve read claims of it becoming harder and harder to find and there has been some concern that production has slowed down and they may discontinue the bar.

Now – that is just a rumor so there is no use spreading it. As of the time of this article, the candy bar is still in production and still available for purchase in a lot of areas. You might just have to look around a little to find one!

In 2014, they rebranded NutRageous to “Nut Bar” and changed the candy bar slightly. They reduced the overall size of it at the time by 4 grams. Not a huge difference but one that people might notice. In 2018, Hershey’s also attempted to create a similar Reese’s OutRageous bar, which used Reese’s Pieces instead of nuts.

The nuts inside of the bar are roasted peanuts and then it has classic Reese’s peanut butter and some caramel in the center of the nuts.

The Chicago Tribute wrote an article in 1993 about this “bizarre candy bar moniker”. The article was written shortly before the candy bar actually started distributing to the market. They also mention that people who tried the candy bar described it as spectacular.

In fact, the fact that NutRageous was marketed as a Reese’s was a major drawing factor to some people. Reese’s came to the market in 1923 so this was the first alteration to the traditional peanut butter cups that everyone loves. Reese’s Pieces were already available on the market but they have not considered a candy bar like the others are.

When Was NutRageous Bar Invented?

The NutRageous bar came out for distribution in 1994. We’re not exactly sure when it was invented but we would assume it was probably at least a couple of years before distribution. There was a lot of press leading up to the debut of the candy bar and the company used focus groups as well.

The focus groups are really how the candy bar got its name. It was originally going to be called Acclaim but they found in the focus group that most actually preferred the name NutRageous instead so they changed the name prior to production to the public.

We also know that there was a lot of lead-up to the release. Prior to this, there was no other candy bar that had been released under Reese’s branding since the original Reese’s peanut butter cups. This new addition as a candy bar got people very excited about the prospect of a twist on a classic favorite.

They attempted to make some changes to it over the years, including a branding and name change but it has always come back to being NutRageous, although they did adapt the candy bar itself slightly and keep to that, reducing it to 47 grams from the initial 51 grams it was created as.

Who Invented the NutRageous Bar?

Unfortunately, we don’t have a sweet invention backstory on this candy bar. We know it was created by Hershey’s and continues to be owned by them and branded as Reese’s bar. You can still find the Reese’s NutRageous fairly easily, although not as easy as some of the candy bars out there.

Hershey’s introduced the bar in 1994. As we’ve shared, there was some history behind the bar, including focus groups that helped them to settle on this particular name as opposed to Acclaim, which was the original intention.

There was a lot of press about the new release and people were really excited about the addition to Reese’s line. The bar has continued to be popular through the years as well.

NutRageous is part of Reese’s line and is owned by the Hershey company that brings you the delicious Hershey Bar. You can find history on it at Hershey Land and of course, look it up for purchase on Hershey’s website.

It has never changed ownership since the initial date of distribution, although the company did rebrand it to Nut Bar in 2014. There has also been a spinoff of the Reese’s Outrageous that substituted the roasted nuts for Reese’s Pieces.

The Reese’s NutRageous continues to be a strong option in the world of candy bars. Can you blame them? It’s a delicious chocolate, nutty, peanut buttery bar with caramel too! Some people even prefer it to Snickers but you didn’t hear that from us.

Have you made it to your rock concert yet?

How Did NutRageous Bar Get its Name?

The original name of this candy bar was actually Acclaim, which really just doesn’t seem fitting if you know and love this candy bar. Thankfully, they took the opinions of their focus groups before the bar was released and used NutRageous instead.

Again, we don’t have some awesome backstory but if you know the contents of the bar, the name is pretty self-explanatory. 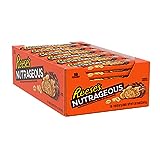 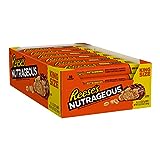 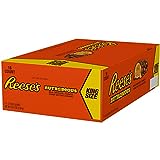 There are no flavor variations of this exact candy bar, although they did try the Reese’s OutRageous with Reese’s Pieces in place of nuts on the bar.

What you will find is the nutrition facts are not as terrible as they certainly could be considering it’s a candy bar. Of course, you can probably find the snack size options too if you just want a quick bite.

These bars are high in protein thanks to the roasted peanuts. Let’s take a quick look at the nutrition details.

Reese’s peanut butter cups contain 4 grams of protein so that leaves you a little bit of comparison on the two. This candy bar is a little high on the sodium scale and that is really because of the peanuts as well. It’s the perfect combination of sweet and salty.

Obviously, if you have any type of peanut allergy, this is not a great option for you but otherwise, it’s perfect. The ingredients include things like peanuts, milk chocolate, sugar, and a few other things as well.

Here are the ingredients of a NutRageous bar.

The great news is that it’s easy to get your hands on a NutRageous bar even if you don’t live near one of their distribution centers. These bars are still produced and are said to be incredibly popular.

If you have trouble finding them in stores near you, it’s most likely because a lot of stores carry limited quantities of some of the specialty bars like this.

Take a look at the Hershey Land website, they have a really great tool available to help you find a nearby location or an online source for your NutRageous bars.

If you want to try to find them near you in person, Wal-Mart seems to be the most common store to find them at. You can do a zipcode or city search on their tool online though to see what is close to you that might carry NutRageous bars.

Finally, you can also order them online from places like Amazon, Wal-Mart, and Kroger.