This classic candy is the flagship product of Reese’s brand and is among the most popular. Reese’s has enjoyed success for the taste of its products, and their Peanut Butter Cups remain a fan-favorite among the brand’s lineup. First created in the year 1928 by HB Reese, this snack has enjoyed a strong following since its inception.

At first, they were just called “Peanut Butter Cups” or “Penny Cups”. Reese’s Peanut Butter Cups release in 1928 was a quick response to a commercial customer who told Reese in 1927 that he was having difficulty keeping stocked with chocolate-covered peanut butter candy. The seller had been buying chocolate-covered peanut butter candy from a supplier who could not keep up with demand and asked H. B. Reese if he could sell him a product to fulfill his customer’s desires.

H. B. Reese created Reese’s Peanut Butter Cups and gave it a unique taste, using Hershey’s chocolate as a core component in its ingredients, which also include high-quality peanut butter, as well as at least 1 secret ingredient. The roasted peanuts that helped make his Peanut Butter Cups so good were unknowingly the product of a malfunction of the original roasting equipment used to make them, and after buying new roasting equipment it was found that the taste of the Peanut Butter Cups had changed. H. B. Reese performed some tweaks and experimenting to get the taste of the product back to the original familiar Reese’s taste.

The success and popularity of Reese’s Peanut Butter Cups represent a culmination of much hard work by H. B. Reese, who was on his third attempt to create a successful candy company. H. B. Reese had always been good at making money and had a very large family, and was known to be a kindhearted man. H. B. Reese began working at the Hershey’s Company and was inspired to create a candy company of his own after learning of a large amount of money Hershey’s was making, with at one point learning the founder of Hershey’s was earning $75.00 a minute at the time.

H. B. Reese made many attempts to create a successful candy company, leaving Hershey’s company to strike out on his own, selling stocks to raise funds and risking it all while providing for a family of 16 children and a wife. However his plans failed twice, but H. B. Reese’s third attempt had resulted in a great company, known for high-quality chocolate treats and its Peanut Butter Cups were his company’s best product.

The Reese’s Peanut Butter Cups became the only product sold by the Reese’s Company for a time, after other products the company sold were dropped when business was hard, but the product remained successful and helped keep the company and brand strong.

Reese’s Peanut Butter Cups owes some of its success to the Hershey company, not only was its chocolate used to create the product, but the company founder had a friendship with H. B. Reese, letting him come back into the company when he needed, and helping him secure credit. Eventually, on July 2, 1963, the Reese’s Company was merged with Hershey’s after H. B. Reese son’s assumed control after their father’s death, and the company is now operated as a subdivision of the Hershey Company as of 2019.

On June 9th, 1956, the Reese’s Company was expanding with a new plant, in addition to at least one they already owned. Reese’s Peanut Butter Cups remains Reese’s company (now a subsidiary) and brand’s best-selling product as of 2019. In 2012, according to Advertising Age and Euromonitor International, Reese’s brand was the top-ranked ranked candy in America, with annual sales of $2.6 billion.

Reese’s Peanut Butter Cups have many different varieties in addition to its classic version, as well as spin-off products. Some variation of the original Reese’s Cups are their white chocolate and dark chocolate varieties, Big Cup versions and a Reese’s Thins version was announced in 2018.

Reese’s Cups have a loyal fan following and have been a very popular product since its inception, with fans favoring its product’s flavor and many variations. Reese’s Cups have come a long way since its inventor dreamed them up to fill a need in the market for peanut butter and chocolate snacks.

Reese’s Cups are not the only type of peanut butter cup in existence, but they are surely the most popular. The hard work of the inventor H. B. Reese, the Hershey company, friendship, family, timing, all of it came together to help Reese’s Cups become one of the most well-known candy products in the U.S and the world.

The man who invented Reese’s Peanut Butter Cups is Harry Burnett Reese, otherwise known as H. B. Reese. He was known to be a kindhearted man, who had a big sense of family. Speaking of family, H. B. Reese had 16 children, 8 daughters, and 8 sons.

H. B. Reese spent years and several attempts to create a successful candy company, with his friendship with the founder of the Hershey company and former boss, and his high-quality confections, including Reese’s Cups, he finally succeeded. H. B. Reese died in 1956 and his candy empire was taken over by his sons after his passing, who eventfully merged their father’s company with the Hershey company.

Reese’s Peanut Butter Cups were invented in the year 1928 and released in November that year. The inventor, H. B. Reese, first started trying to come up with the idea for Reese’s Cups in 2017. H. B. Reese was challenged to create a chocolate and peanut butter candy product to fill a shortage that a commercial businessman was having, as his supplier at the time could not keep up with this customer’s demand.

The Company That Makes Reese’s Cups

The company that makes Reese’s Cups is The Hershey Company, an American-based snack company. Hershey’s is one of the largest chocolate manufacturers in the world, and are known for their flagship product the Hershey Bar, as well as for owning other candies such as Twizzlers.

The Popularity Of Reese’s Cups

Reese’s Cups sure are popular, with the King Size Reese’s Cups being the most popular candy product sold in U.S convenience stores in 2017. What makes Reese’s Cups so popular depends on who you ask, but many people clearly love the taste, and it is widely considered a classic confection in the United States. Reese’s offers a unique and original taste and one that has been around for many years.

It is seen in many households and is an easy snack for kids to eat, sold in convenient size options. In the end, Reese’s gives everyone a quality snack that they can pick up in a wide range of amounts, be it single packages or in larger cartons. Then the candy treats its consumer to an enjoyable tasting experience that many seem to love, judging from the candy’s wide success and the many fans that express enjoyment of the taste and product.

You can also buy Reese’s online via various outlets, this can be good for those looking to buy Reese’s Cups in bulk or those looking for a particular flavor. You can check below for offers on buying Reese’s Peanut Butter Cups online. It takes longer to buy them online as they have to be shipped to you, but it is a good way to deal hunt to find what you are looking for. 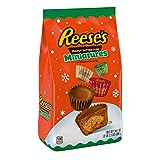 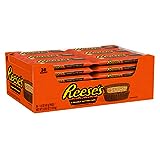 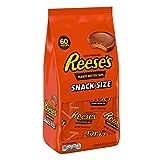 Here is a list of stores that may sell Reese’s Peanut Butter Cups:

This review is for the normal version of Reese’s Peanut Butter Cups.

The package of Reeses’s installs a feeling of warmth and nostalgia, maybe because it’s something familiar since childhood. There is a sense of cogitative ease looking at a package of Reese’s. The Reese’s Cup itself is packaged neatly in its paper wrapper, looking almost flower-like at a glance.

There is not much smell given off from the treat at a distance, although up close a chocolate and peanut butter smell can be picked up. The smell of this candy is light and sweet. The cup is solid yet somewhat soft when held in hand, and quick to melt

While some candies that have both peanut butter and chocolate will have them layered, clearly separated, or try to make them combined, the taste of each flavor tends to stand out in other products so that one can separate them in their taste. Not so with Reese’s, the flavors of the two prime tastes here are so closely linked that it is hard to tell them apart, and in this case that is a good thing.

Here is a list of types and flavors of Reese’s Peanut Butter Cups:

Reese’s Peanut Butter Cups were a mainstay for me during childhood, my number 1 candy brand. It was and still is by far my favorite candy. When I was a kid I was go nuts for Reese’s Cups, and while I have grown up a bit now, I still find myself craving these and I buy them regularly. Reese’s chocolate and peanut butter tastes are second to none.

They easily beat out everyone else. I would eat Reese’s Cups for almost any reason, and I still find myself looking for an excuse to get it; “Oh, ill want a snack later” is pretty much what I think when I see Reese’s Peanut Butter Cups in stores. They put them by the cash register for a reason, they know it is an impulse buy.

From childhood to adulthood these things have me legitimately hooked. The flavor of them is what keeps me coming back, ever since I was a kid I loved the taste. But it is also the smoothness of the candy, it is soft and easy to chew candy and it just comes off as something exquisite to eat.

Reese’s Peanut Butter Cups tends to use orange as the main color for its packaging style. The shade of orange used tends to stand out on shelves and is not a commonly used color. Reese’s Cups tends to use different coloring to help signify differences in flavor and variety. White Chocolate Reese’s have primarily white-colored packages, but still, make use of the color orange in the very center of the packaging to help distinguish the candy as a Reese’s branded product.

The Reese’s name is almost always shown in large yellow front, taking up most of the packaging design space. Usually the boldly printed name “Reese’s” will be in the center of the packaging. There are some exceptions to this rule, however, such as with the Reese’s Peanut Butter Lovers variety that had the product’s name slightly above center and to the left.

Some types of packages of Reese’s Cups will have a picture of Reese’s cup or a partial one displayed on the package also, helping to show what the product looks like. Some special edition packaging may have special effects, such as glow in the dark packaging that was released for Reese’s Cups as Halloween candy.

Here are some pictures of Reese’s Peanut Butter Cups

HOW AUSTRALIAN MICK BURKE EATS A REESE’S CUP. THIS COMMERCIAL IS FROM THE YEAR 2000.

A LITTLE VIDEO ABOUT KEEPING YOUR REESE’S CUPS COOL IN THE HEAT.

This information is for a 2 cup package of Reese’s Peanut Butter Cups.

Read About More Snacks And Candy!

Jack Link’s is a brand of beef and meat-based snacks. Read more about Jack Links Beef Jerky here. Such as its history and where to buy Jack Links.