Fanta, the fruit flavored soft drink with numerous flavors that is owned by Coca-Cola has an incredibly interesting history. From first being created with Nazi Germany as a replacement for Coca-Cola to being remade and rebranded in Italy.

Let’s talk about Fanta and how it became one of the most internationally recognized soft drinks in the world. Going from why it was developed in Nazi Germany to becoming the fruit flavored drinks we know it as today.

To tell the full story of Fanta, we have to go a decade before it was created. Coca-Cola had been sold within Germany a decade before World War 2 and it was actually quite popular there.

Even when the Nazis took control of the country, Coca-Cola was still made millions in Germany. The person to thank for Coca-Cola’s success there Max Keith, who ran Coca-Cola’s operation in Germany.

When the Nazis took over, Keith quickly began advertising Coke as the official drink of Nazi Germany. The German public bought into this propaganda and Coca-Cola surged in popularity there.

So much so that Coca-Cola became one of the official sponsors of the 1936 Olympics held in Berlin. Many Nazis in positions of power, including Hitler himself were said to have loved Coca-Cola.

The US Trade Embargo

The sale of Coca-Cola in Nazi Germany would abruptly end after Japan bombed Pearl Harbor. This action by Japan would force the US into WW2 against Germany, who allied with Japan.

Since the US were now at war with Japan and Germany, a strict trade embargo would be implemented. This embargo meant that no American products were allowed to be sent or sold within and especially not Coca-Cola.

It was considered America’s drink and couldn’t be associated with Nazis.

Even though Coca-Cola could not be sold in Nazi Germany, the company did not want to close their factories. Max Keith had to act fast, because the Coca-Company in Germany was on the verge of shutting down their operations.

Keith and his team needed to come up with a new beverage that would somehow replace Coca-Cola. Something that the Third Reich would embrace as the official drink of Germany that was 100% German.

They also had limited resources due to the trade embargo, so Keith’s chemist began coming up with recipes. A salesman on Keith’s team named Joe Knipp would pitch the idea to name this beverage “Fanta.”

A shortened version of the German word for fantasy. The name stuck and the drink has been known as Fanta ever since.

Since Coca-Cola didn’t have access to traditional soft drink ingredients, they had to improvise with the Fanta recipe. The original Fanta recipe basically consisted of discarded remains from other food industries they bought along with war time rations.

Everything from fruit shavings, pulp, and beet sugar were added to make the original Fanta drink. Some even said that this drink had a flavor of cheese rather than a normal soda or soft drink.

This drink would save Coca-Cola in Germany and replace Coca- Cola as the official drink there during the war.

Fanta would quickly become the top drink in 1940s Germany, but that was really because there was no drink market. The only options the German people really had in terms of soft drinks was Fanta or nothing.

It also wasn’t exclusively drunk by Germans during the war. Due to its popularity, Fanta was exempt from the rationing laws implemented in Germany during this time.

Germans would use Fanta in a variety of things from sweeteners in soups and desserts. This was due to beet sugar being used in Fanta to sweeten the drink.

In the height of Fanta’s popularity, Coca-Cola would sell around three million cases in 1943.

Fanta in the Netherlands

The Dutch Coca-Cola Company also faced the same problems as the Coca-Cola plant in Berlin. Ingredients they needed to make Coke were in short supply and they were on the verge of shutting down.

Keith would offer the Dutch Coca-Cola affiliate the use of the Fanta brand and recipe to save the company there. They quickly accepted Keith’s offer and began making their own version of Fanta.

The Dutch version of Fanta was a bit different than Germany’s version. In the Dutch version, they would use elderberries to sweeten the drink rather than beet juice.

Even though Max Keith worked with Nazis during WW2, he actually did not gave any repricussions for his actions. The heads of Coca-Cola actually applauded Keith’s allegiance to Coca-Cola during this time.

Stating that he could’ve shut down the Coca-Cola plant and came home, but persevered and saved the company’s German operations.

Unfortunately, the end of World War 2 meant the end of the production of the original Fanta.

The Coca-Cola company would wait ten years before reintroducing Fanta to the public. This was in response to Pepsi, who began releasing new products of their own.

They loved the name, but were not going to use the formula that used rations like the Germans had to use.

Coke wanted to come up with a brand new formula that matched the name of the product. Chemists for the company came up with an orange flavored recipe that was infinitely better than the original.

This new variation of Fanta would be created in Naples, Italy in 1955 for two particular reasons. Naples had a Coca-Cola plant with oranges readily available and the company didn’t want Fanta to take sales away from Coke.

Europe would be the perfect market to test out the new orange flavored Fanta.

Fanta gained popularity rather rapidly within Europe. So much so that Coca-Cola began expanding the drink’s availability to different markets.

It became especially popular in tropical markets that enjoyed fruit flavored drinks like South America and South Africa. This would lead to the drink gaining international popularity and numerous types of flavors being created.

After selling well in various markets, Coca-Cola finally let Fanta be sold in the US.

In 2001, Fanta’s popularity in the US had really declined. Coca-Cola executives wanted to give the drink a brand new advertisement campaign.

They turned to the ad agency Ogilvy to help them come up with a new campaign. What that came up with made Fanta once again explode in popularity .

Coke would introduce “The Fantas.” Beautiful models in colored clothes that represented the top flavors of the drink. The Fantas would sing the jingle “Wanta Fanta!”

This ad campaign would last for 5 years and then get reintroduced for a short time in 2009.

Fanta is actually the first drink that Coca-Cola made that wasn’t Coca-Cola. For decades it was just under Coca-Cola as the most sold soft drink in the world. 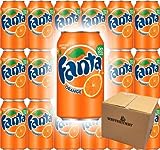 Today, there are over 100 different flavors of Fanta available with different regional flavors in each country. Here is a list of some of those flavors.

In the Philippines, Fanta is not sold as Fanta within this country. Instead, Coca-Cola sells Fanta under the name “Royal” and offers many of the same flavors as in other countries.

Here are some of the more prominent competitors to Coca-Cola’s Fanta.

Today, Fanta is available on nearly every continent and one of Coca-Cola’s biggest sellers right under Coke. This brand is nearly 80 years old and shows will continue to be a globally popular soft drink.

Fanta is a brand of fruit-flavored carbonated soft drinks created by Coca-Cola Deutschland under the leadership of German businessman Max Keith.

When was Fanta invented?

First on sale in 1960, currently Fanta is the second-largest soft drink brand in the world.

Where did Fanta originate?

Fanta was first created in Germany. Fanta came about during the Second World War when there was a trading ban between Germany and any of the Allies’ countries.

How much sugar is in Fanta?