Raisinets are chocolate-covered raisins that are irregular in shape and come in a box, they were first invented in the year 1926. They are sold in boxes and bags that are yellow in color. Raisinets have been sold in vending machines and stores, and are sometimes included in snack mixes. They are made with milk chocolate and there are other versions of this treat, such as cranberry and dark chocolate.

Raisinets are chocolate-covered raisins and were first introduced in 1926 by the Blumenthal Brothers Chocolate company. The brand was eventually sold to the Nestle company in 1984. Under the Nestle production Raisinets are California raisins dipped in creamy Nestle milk chocolate.

The production of these chocolates takes place in Burlington, Wisconsin. Originally it took about a whole 2 ½ hour process to make. Nestle is the manufacturer, distributor, marketer, and seller of the Raisinet brand since 1984. Nestle purchased the brand from Ward-Johnston, maker of Raisinets. The Raisinets are sold in grocery stores, convenience stores, and varying retail stores such as Walmart, Target, Amazon.com, and CVS.

The Nestle marketed version is desired to be recollected as a healthier alternative to other chocolate products on the market. The package is noted to include that it has 30% less fat than the leading chocolate brands and is a natural source of fruit antioxidants. Raisinets were discovered by a company called the Blumenthal Brothers, which was founded in 1900. With German heritage, these brothers began production of cocoa powder in 1909, and by 1911 the very first factory was established in Bridesburg, Philadelphia.

Nestle created some variations to the Raisinet brand type. Some popular spin-offs include a Cherry flavor, which is Nestle dark chocolate covering dried cherries. Another popular option is cranberries, which are dried cranberries covered in Nestle milk chocolate. A television commercial in 1971 can be seen featuring Goobers. The tagline for the ad was, “the chocolate covered candies that pour”. At this time a box of Raisinets was only sold for 15 cents!

Perhaps an interesting occurrence on the packaging can be related to the time when a young woman named, Sandy Hafer, allegedly filed a lawsuit against the Nestle company in 2017 for unreasonably leading consumers to believe that a package of Nestle Raisinets contained a full box. She claimed that a package only had about 60% of raisins while leaving the box about 40% empty!

On January 16th, 2018, Nestle announced the sale of its confectionery business to Ferrero for 2.8 billion dollars. Many confectioneries such as Nestle are taking a turn with their business due to the direction of the consumer preferences towards healthy foods and so Ferrero is taking over the reins of the enterprise. Heading into 2019, the future was is in the hands of the Ferrero company who already has plans to relaunch the Butterfinger with a new recipe. Keep an eye out for the new logo to appear on boxes as the Nestle company only has logo rights for one year from January 2018.

The first logo of the Raisinets candy brand was introduced in 1927. The logo had a wavy look and was in red and dark brown colors. In this version, “Raisinets” is written in uppercase letters. The letters are read and have a curvy shape.

Underneath the name, there is a little phrase that says “Milk chocolate-covered” in uppercase letters and a dark brown color. Additionally, with the same “flow”, eight chocolate-covered raisins are shown side by side.

In the 1970s, a new logo was introduced, which looks absolutely different from the original one. Here, there is no curvy shape to the letters, and the logo is presented between two horizontal lines. The logo is tilted sideways and has a lowered left side. The colors remain the same, red and dark brown. In this version, the word “Raisins” is bolded.

In 1984, there was another modification, and this time, the yellow and white colors were added. This was the year when Nestle acquired Raisinets. Nestle’s brand name appeared on the Raisinets’ logo in the left upper corner. All words are in upper case in this version.

The color and vibrancy were added to an existing logo in 1997. There are white lines coming from the background that mimics the sun and give “life” to the logo. The dark brown color was replaced by purple. The “Nestle” brand logo is brought into the center too. The phrase “milk chocolate covered raisins” is no more.

The logo remained the same until 2003. However, this year it got fundamentally modified again. In this version, the curvy shape is back, all other colors are lost, and only red and white are used.

The current logo was created in 2019, and this is the simplest version of all. The logo only includes the name of the candy, “Raisinets,” with only the letter “R” in the upper case. In 2018, the “Nestle” brand name disappeared from the logo because it was acquired by Ferrero. 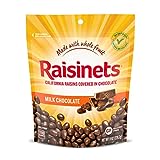 Here are the ingredients for Raisinets.

The Company That Makes Raisinets

Currently, Raisinets are manufactured and marketed by the Ferrera brand, which is a subsidiary of Ferrero SpA, which acquired the product from Nestle.

The Ferrara Candy Company is an American candy manufacturer based in Chicago, Illinois, and owned by the Ferrero Group. Ferrara also owns candies such as Chuckles Candy, LemonHead, and Red Hots. They also produce candies such as Runts Candy and Nerds Candy.

The company goes back as far as we remember and has been on the market since the 1900s. It all started with a small bakery owned by Salvatore Ferrera. He was an Italian emigrant and opened his first confectionery business in New York in 1908.

One of his first confectioneries was Candy-coated almonds, also referred to as “confetti.” Salvatore soon increased his business with the help of his brother-in-law. Little did he know that his little business would turn into a giant confectionery company that would cure the sweet tooth of the world.

The company is well known for its Mellowcremes, which are especially popular in the USA. They are also the largest manufacturers of candy canes and jelly beans. They state that they have up to 800 pans that are operating at any time. Also, it is known that they produce more than one million pounds of gummy candies in just a week.

Did you know that Raisinets are kosher-certified? Raisinets are available in most of the large supermarkets such as Walmart, Target, and CVS.

It can be ordered online from any part of the world. The most famous one is Amazon. On Amazon, they are sold in many different packaging and quantities. You can choose among those ones: 8-ounce, 3.5-ounce packaging, and even large containers holding 3.4 pounds of bite-sized raisins.

Raisinets are one of the most popular and loved candies in the world and have been around for quite some time. Those little treats managed to become a significant part of the Christmas, Easter, and Halloween celebrations. Who would not enjoy sweet, chewy chocolate-covered raisins?

Have you ever tried Raisinets or do you wish to try them out? Share your thoughts in the comments section below.