If you like jelly-style candies, you might already be familiar with Chuckles candy. These fruity little gummies have been around for a while and they were the original fruity, gummy candy that was sold to kids and adults alike. Jelly candies have been popular for a long time, but Chuckles candy were unique because they were made with many flavors in one packet from the start.

If you have never tried this iconic little jelly candy, it’s worth giving them a shot. They are a really unique treat and many people find that their tart and sweet goodness is quite memorable in a good way. Bite-sized fruit candies are always enjoyable, and Chuckles candy are still one of the best choices in this category.

Armend had originally started out making marshmallow products. The jelly candy formula that ended up becoming Chuckles candy was a personal creation. The formulation of this candy solved an issue that made selling jelly candies at the time rather difficult. The candies would begin to sweat, which made them sticky and less flavorful as well as hard to eat. The formula that Armend had created prevented this from happening.

The candy was first made in Chicago but was later moved to the Danville, IL site in the 1930s. Chicago was a center for the production of many items of all kinds at this time, but the move to IL was a good move for Chuckles candy that sustained the company for many years to come.

Being able to market and move your product readily was important during the early years of candy making. There were no supply chains for moving products like the ones that are available now. Being able to house your own creation and shipping processes partially or entirely in-house mattered for the success of a brand during these days.

Fred’s wife named the little candies before they were to market and they were originally hand wrapped individually. The candy was then sold as a strip of candies that were linked, rather like ZotZ. They are still sold this way in some candy stores, but usually, they are sold in variety bags that include all the flavors. The individual wrapping kept the candies from sticking together and getting smashed and this is still a packaging method that is used for many fruity candies that are not hard candies.

The risk of crushing gelatin candies during transit or before a sale is tough to combat without individually wrapping each piece of candy. This was a smart move at the time that this brand was created and it has continued to be a great solution even today.

An early customer for Armend was the F.W. WoolWorth Company and the candy was later used during WWII to advertise the Armend candy company. This was a candy that was advertised for sale with the slogan, “5 flavors- 5 cents, America’s favorite Jelly candy”. They also used a slogan, “purest candy tastes just dandy, keep it handy”. This makes it clear just how important it was for candies during this period to be cheap, portable, and durable.

This candy has traded hands many times over the years but the candies themselves have not changed at all. The candies are still made the way they always were, which makes them a perfect snapshot of the jelly candy that was popular in the 1920s.

These candies come in a variety bags and in each bag there is cherry, lemon, lime, orange, and licorice. The candies are jelly but they are coated with a light dusting of sugar. This makes them all sweet and a little crunchy at first, which is a really fun combination of textures.

The candies have a simple recipe and they hold up well to getting warm and to being pressed down by other items around them. This makes them a good snack for lunchboxes, portable food that has to be taken camping or on hikes, and more. This is a durable candy, which was important in the early days of candy making before refrigeration and climate-controlled living.

This candy is available in the classic variety bags year-round but there are also seasonal varieties that are made each year and Chuckles Minis.

In September of 1974, the candy company teamed up with Evel Knievel, offering publicity for the candy alongside the famous Snake River Canyon jump. They were actually one of the sponsors of the famous stuntman for some time leading up to this and ramped up their press and advertising as he planned for his most famous stunt. This was a better deal for Chuckles candy than for the stuntman, and the company got a lot of free press out of the run-up to this stunt.

The candy has also been mentioned in a Seinfeld episode where two paramedics argue over whether or not someone ate the other’s Chuckles candy. The treat was also in a Night Court episode and a Taxi Driver episode. The candy seems to have made sporadic appearances in TV and other popular culture in part due to its silly and memorable name.

Recent news was made in Des Plaines in Minnesota when the Farley’s & Sathers Candy Co decided to close its plant there. This location was making 2 million pounds of Chuckles, Gummi bears, and Juicy Fruit each week prior to its close. Locals reported that they felt sad about this change since the gummy candies had been closely linked with the area for many years. 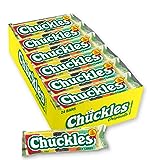 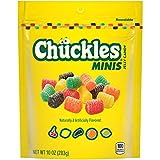 You can also buy Chuckles at Old Time Candy by clicking the image below.

From the Ferrara Candy Shop entry for the Chuckles candy:

Today’s candies are sold in strip-style packs that are clear and show the candies within the wrapper with the logo on top. They are also sold in larger variety pack bags that are clear with a little bit of yellow on them. The candy logo is white with a green background shadow and the overall presentation is simple, stripped down, and basic.

The candy was sold in the 20s as individually wrapped candies and also as connected candy strips. There are also older packaging styles that include a solid green cardboard box with the logo on it in white lettering and a yellow cardboard box with green lines across the background and the logo in the same font and style as the packaging that is used today. The minis are sold in yellow bags with a flat bottom, which is fairly standard for this kind of candy made by many candy makers.

The candy was advertised early in its life in 21 markets east of the Mississippi River and north of the Mason-Dixon line. They were sold in these areas on billboards, car cards, in newspapers, and on the radio. This was a classic candy that was already practically selling itself but making sure that people were aware that it was portable, held up well to being carried around and eaten on the go, and that it did not melt was important.

There are some other fruity candy styles out there that are a bit like Chuckles. Many people connect them with Jujubes, although this other candy does not have the sugar coating that Chuckles candy does. Fruit snacks of all kinds are also a little similar, but they are not made of this kind of jelly and they also do not have the crunchy sugar coating that Chuckles do.

These jellies are more like the slightly more familiar fruit wedges candy that can be gotten at most candy stores as well as ordered online. This is a classic candy-dish candy that is not as good as Chuckles candy are flavor-wise but are more commonly sold and eaten. You could also compare them to Spice Drops, which are similarly coated in sugar like Chuckles. Fruit Slices are another classic gelatin candy, but these candies have a hard fruit “rind” on them that Chuckles candy do not.

There are many candies that you could compare Chuckles to, but they are fairly unique in the candy market, even today. This is a recipe that has not been topped by other fruity candy makers, and this is likely why the method of making and flavoring Chuckles has not changed much over time. Classic candies are able to sell themselves, and these are some of the most classic grab-and-go candies on the market.

A taste test that lets you see the candies and the packaging:

Here is another taste chuckles candy test for you: