Goobers are chocolate-covered peanuts. They are small, round or oval, and are generally irregular in their shape. These chocolate-wrapped peanuts are called Goobers due to the name referring to peanuts in some areas. Goobers were first invented in the year 1925, with a trading mark filing putting its first use date as 12-4-2915. Goobers have often been eaten as a movie snack and have been sold in movie packs. Some people appear to like to mix Goobers candy with popcorn and eat them together.

Goobers are a chocolate-covered peanut candy that was introduced in the year 1915. Goobers are small, rounded, though irregularly shaped, and are brown in color. The name Goobers may come from a Southern word for peanut that originated in North Carolina, where Goobers candy was first produced. Goobers are fresh roasted peanuts coated in a shell of chocolate, with other ingredients that have included sugar, tapioca, confectioners glaze, and citric acid.

Goobers were introduced by Blumenthal Brothers Chocolate & Cocoa Company in North Carolina in 1925. Nestlé acquired the brand in 1984 from the Terson Company, which purchased Ward Foods, which acquired Blumenthal in 1969. Goobers are currently owned by Ferrero, who obtained the Goobers in 2018 after acquiring much of Nestlé’s USA chocolate products in 2018 in a 2.8 Billion business deal.

Goobers chocolate-covered peanuts have managed to become a very popular movie theater snack. The Goober 20s candy brand has released TV commercials in order to promote the Goober brand television ad for Goobers candy from 1986 featured an astronaut munching Goobers on a spaceship.

Goober is sometimes used in various recipes to create desserts. One recipe for Goobers is an Ice Cream Cake that includes a brownie crust and peanut butter ice cream with a chocolate ganache and Goobers candy to top it off. The word “Goober” has been used as slang terminology to stand for both a peanut or foolish person. A trademark filing exists for Goobers that list the first use in commerce date as 12-4-1925. Goober’s packaging style has changed over the years, switching from an all-white package with blue and white lettering in its early life, and later on, adopting a blue-colored package with white lettering for its “Goobers” brand name on the packaging.

The Year Goobers Was Invented

Goobers were invented in 1925. A trademark filing was found for Goobers that listed the first use in commerce date as 12-4-1925, however that does not always mean that is the true date a candy was first sold or made.

Goober is actually an old word for peanut in the South, which is why these little candies were named this way in the beginning. This term no longer means the same thing, but the name of the candies is tied to the product now too closely to change the name now! For those who grew up eating “goobers” that were not actually the candies that are referred to in this article, this term is very nostalgic. The fact that the Blumenthal family was from the South, North Carolina, to be exact, is a big part of why this name stood the test of time.

There are also many references to this term as a small insult. A goober is someone who is goofy or silly, or doesn’t always make smart decisions. This was a common connection with the word at the time that made its way into popular culture. Gomer Pyle’s brother on the show was named Goober and this was likely because of the silly nature of the character. This is the reference that more people actually know about these days, which can make the name of the candy seem a little strange to some. Without knowing that the word was originally a term for peanuts, you could well be very confused by this name.

The thing that is probably the most interesting to note about Goobers as a candy is that the peanut was not thought of as good eating by those growing up in the South when they were first brought to be grown there. These legumes were associated with slave food at the time, and after the Civil War, peanuts were considered the food of hard times. Plantation owners that were forced to eat these hardy legumes in the post-war reality were bitter about it and made it clear.

It took some time for peanuts to become associated with other connotations, and candies like Goobers that made something good out of something that was not considered to be very edible were being smart with their resources. A peanut by itself was likely considered a boring food that no one would eat. A peanut that was covered in chocolate was a totally different animal altogether.

As the peanut became more popular, Southern cooking made friends with it. There were goober pies, goobers cakes, and just plain old boiled goobers to be had in many places. This was the beginning of peanuts being included in many candy bars and other sweets and getting out from under the cloud of shame that had covered them for years. The fact that Goobers are still being sold successfully today is likely due to the change in opinion about peanuts as much as the taste of the candies themselves.

The Company That First Made Goobers

The Company That Owns Goobers

The company that owns Goobers is Ferrero, which acquired them from Nestle in the year 2018. in this deal, many candies were transferred from Nestle to Ferraro, including candies such as Laffy Taffy, Crunch, and Nerds candy. Ferrero is a major manufacturer of branded chocolate and confectionery products and it is one of the largest biggest confectionery companies in the world as of 2019. 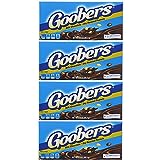 Here are the ingredients of Goobers.

Are Goobers and Raisinets the Same Thing?

Raisinets are a similar item in some ways. They are also made by Nestle and have been around for almost as long as Goobers. The difference between the two candies is that Raisinets are made with raisins in the center instead of peanuts. Many people think that both of these candies are actual peanut candies, but of course, that illusion would be broken if you tried them both at the same time!

Candy-coated items like this are not that common in major candy maker’s stables, but Nestle has been known for years for sticking with traditional candies that have stood the test of time. While you might not be able to convince kids to be excited about eating Raisinets, if you tell them that they are not just chocolate, you can be sure that the candy is a simple and safe choice. So long as little kids don’t know that there are raisins in the center of these candies, they will love their sweet and chewy taste!

The same could be said for Goobers, which are a very simple and classic candy that many would argue is not interesting enough to be enjoyable. What many people don’t realize is that peanuts are included in many more complex candy bars, but you cannot taste them due to all the other ingredients that are included in the candy bar as a whole.

Enjoying delicious and flavorful candies that are not heavily covered up with toffees and other additives can be really enjoyable. Classic candy snacks are probably still so popular just because of this, and you might not have realized what you have been missing out on. Enjoying some simple and classic candies can go a long way toward reminding you why you have always loved classic candy bars and snacks.

The Goobers and Raisinets 70s jingle:

Goobers are chocolate-covered peanuts. They are small, round or oval, and are generally irregular in their shape. These chocolate-wrapped peanuts are called Goobers due to the name referring to peanuts in some areas.