Laffy Taffy is a piece of taffy candy that comes in various flavors. First called Beich’s Caramels, eventually, the candy was renamed Beich’s, Laffy Taffy. This is a generally small candy that is somewhat soft, very chewy. The candy comes individually wrapped, and is a color that helps identify the flavor, such as red for strawberry. Back when the name Beich’s was used, Laffy Taffy tended to be more square-shaped and thicker, though now they are generally flatter and longer.

Laffy Taffy was first invented in the 1970s and has been made in flavors such as Sparkle Cherry, Grape, and Sour Apple. It is oftentimes, but not always, fruit-flavored and flavors that are chocolaty have been produced as well. This 70s candy does not take itself too seriously and likes to do things like add jokes to its product to amuse its customers. You can find jokes like “What do you call a cow with no legs? – Ground Beef.” inside the wrapper.

Laffy Taffy’s history begins with the Beich’s Candy company. Beich’s was founded in 1893 by Paul F. Beich. The company was the seller of the Beich Whiz bar, a chocolate-covered marshmallow candy that was once rather popular. When Beich first introduced Laffy Taffy candy, it was called Beich’s Caramels, with the name of the flavor in the middle, such as “Beich’s Banana Caramels”.

It should be noted that despite being called “caramels”, they did not, in fact, seem to be made with caramel, and instead were a type of Taffy. Taffy candy is a type of candy made by stretching or pulling a sticky mass of boiled sugar, butter or vegetable oil, flavorings, and coloring until it becomes aerated. Eventually, the candy was renamed Beich’s, Laffy Taffy.

Beich’s Laffy Taffy used to be more square in shape and thicker, and for a time you could buy large amounts of multiple colors of small square Laffy Taffys. In general, however, Laffy Taffy is now a flat and longer candy, though still somewhat small as far as candies go. Each piece of candy is individually wrapped, almost a necessity when dealing with Taffy-based candy, as it can get sticky, although people like to eat it for its sticky and chewy nature.

Laffy Taffy comes in many flavors, such as cherry, grape, banana, strawberry, and blue raspberry. Spin-offs for the product have also been created such as flavored Jelly Beans and Laffy Taffy Flavored Lip Gloss, (Made by Taste Beauty the same company that makes edible Fruit Gushers Lip Balm).

Laffy Taffy was acquired by the Nestle Company and the product was added to the Wonka brand and the name changed to simply “Laffy Taffy”. Trademark information shows Societe des Produits Nestle S.A filed for a trademark for Laffy Taffy on September 6, 1994. It should be noted that this same trademark information states that the first use in commerce date is 1985. Nestle sold Laffy Taffy and many other brands to the company Ferrero SpA in a roughly 2.8 billion dollar deal in the year 2018.

Laffy Taffy was engaged in such advertising, such as TV commercials, often geared to kids and young teens. A patent for an Interactive foodstuff holding device that made interactive sounds, lights, and motion when the children ate a candy product had Soft Sour Apple Laffy Taffy used in a table that showed it was tested for its electrical resistance to see how it may work with such a device. This device was proposed to focus on children’s – especially young boys – fascination with grotesque themes, and suggested having toys make sound and when a candy-shaped creature had its extremities bitten off. 30 M.OMEGA. 4 M.OMEGA was the information stated for the resistance of the tested Laffy Taffy.

Laffy Taffy has included jokes into its product, likely to help make a play at its own name and the “Laffy” part in it. The name of the candy implies this is a silly candy of some sort, and while taffy candy could be viewed as that naturally, it likes to go the distance in including jokes on the inside of the wrapper. This is somewhat similar to the messages that Fruit By The Foot likes to include on its candy wrapper. Some jokes that are used inside Laffy Taffy candy wrappers are “How do dinosaurs decorate their kitchens? With rep-tiles!”, “What do you call an angry pea? Grum-pea.”, and “What did the house wear to the party? Address.”

The Company That Invented Laffy Taffy

The company that invented Laffy Taffy is Beich’s company. Beich’s was founded in 1893 by Paul F. Beich, and the company made other candy products as well, such as Beich Whiz bar, an old popular candy.

The Company That Owns Laffy Taffy

Laffy Taffy is owned by the company Ferrero SpA, an Italian manufacturer of branded chocolate and confectionery products. Ferrero SpA has acquired Laffy Taffy and other brands such as Crunch Bar in a roughly 2.8 billion dollar deal with Nestle in 2018. Laffy Taffy is formerly owned by the Nestle company. Nestle is one of the largest food companies in the world and owns products such as Rolo.

The Original Name Of Laffy Taffy

Laffy Taffy has had a bit of an evolution of its name over time. First, the name was Beich’s Caramels and would have names such as Beich’s Strawberry Caramels on its wrapping paper. Eventually, the candy was renamed Beich’s, Laffy Taffy. After Nestle acquired the candy from Beich’s the name was changed to “Wonka Laffy Taffy” or just simply Laffy Taffy.

The Year Laffy Taffy Was Invented

The original version of Laffy Taffy was first invented sometime in the 1970s and was first called Beich’s Caramels. The candy was not as flat back then and was thicker and square-shaped initially. 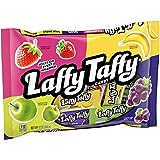 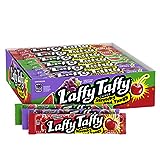 Laffy Taffy tends to vary its packing style between having stripes and having no stripes on its packing. Cherry flavored and Banana flavors tend to not have any stripes on their packing and prefer an all solid colored background. Most other flavors do appear to have stripes on their packings, such as Blue Raspberry, Strawberry, and Grape flavors. These stripes on the packaging of the candy tend to be wavy, and alternate between shades of white and the color that people tend to correspond with that flavor, such as purple for the grape flavor.

Here are the ingredients of Laffy Taffy.

Laffy Taffy’s advertising style has long been whimsical and exaggerated, using the Willy Wonka Brand as a way to target a younger audience. The company focused mainly on commercials often featuring an animated Willy Wonka and his chocolate factory. They have been referenced in other places in pop culture as well. In 2006 Hip-Hop group D4L released the song “Laffy Taffy” which you can watch below.

Although the song had not affiliated with Nestle these references in pop culture serve as a free advertisement to the brand. In 2018 Nestle sold its U.S. store brands which included Laffy Taffy to Ferrero SpA ( the creator of Nutella). The company plans to re-investment in its marketing in 2020.

Read About More Snacks And Candy!

BB Bats are a long taffy sucker/lollipop. They come in flavors such as Banana and Strawberry. Read more about BB Bats here or find out how to buy them.

Fun Dip is a candy product that includes powder candy in pouches that can be eaten with a candy stick that is included in the bag. Read more here!

What is Laffy Taffy?

Laffy Taffy is a piece of taffy candy that comes in various flavors. First called Beich’s Caramels, eventually, the candy was renamed Beich’s, Laffy Taffy. This is a generally small candy that is somewhat soft, very chewy.

How many calories in a Laffy Taffy?

There are 140 calories per serving size of Laffy Taffy.

How is Laffy Taffy made?

Laffy Taffy candy is a type of candy made by stretching or pulling a sticky mass of boiled sugar, butter or vegetable oil, flavorings, and coloring until it becomes aerated.