Werther’s Original is a brand of caramel candies, best known for its small hard candy variety that comes in gold-colored wrappers. Werther’s Original first was invented around the year 1903 by a man named Gustav Nebel. He was an employee of a man named August Storck, who set up a candy company in the small town of Werther in the Westphalia region of Germany.

It is hard to say for sure what Werther’s Original name was when it began its life. But at some point around 1969, it began being called Werther’s Echte, which happens to translate to Werther’s Genuine, Real, or Authentic. This may be why the company that owns Werther’s Original, August Storck, tells a story about how originally Werther’s candies were made with high-quality ingredients from the start.

Werther’s Original comes in a variety of types but is most commonly known for its hard candy variety. The Werther’s Original brand also includes soft caramel and chewy caramel candies and produces them in a variety of flavors. Some flavors of Werther’s Original include Caramel Coffee, Caramel Apple Filled, and of course the original Caramel flavor hard candy. The caramel candies come in a signature gold wrapper, that has become iconic for the brand. Outside the wrapper, the candies are small, round or oblong, and are usually brown, tan, or black in color.

These candies have become well known over the 100+ years it has been around, and have developed a popular fan base filled with nostalgia over them. Many people have eaten Werther’s Original as children, with the enjoyment of the candies being passed down from their parents and grandparents, helping make Werther’s Original an iconic caramel candy brand.

These qualities are still idealized by the company today, and the brand often has a luxurious style to its product and image. Werther’s Original is still produced by August Storck, the company that is, with the man the company is named after changing his name to August Oberwelland. It appears the companies original name was Werther’sche Zuckerwarenfabrik and produced several other candy brands in addition to Werther’s Original, such as Riesen and Toffifee.

The name of the product changed from Werther’s Echte to Werther’s Original in order to make it more appealing to the international market. Werther’s Original has now been sold in over 100 different countries worldwide. The candy is often viewed as a family-centered treat with a long history, and the tradition of eating them is often passed down from parents or grandparents to their children and grandchildren.

In 2019 it was reported that Werther’s Original had reached a yearly sales of $91.23 million dollars. Although it may be an old candy, this brand is still fairly popular even as late as 2019, well over 100 years after the brand was created, and the product is viewed fondly by many fans still.

The Year Werther’s Original Was Invented

Werther’s Original was invented around the year 1903, seemly soon after the start of the company that invented it, August Storck (or Werther’sche Zuckerwarenfabrik).

The Company That Makes Werther’s Original

The company that makes Werther’s Original is August Storck. The company was named after its original founder, who was also called August Storck before changing his name to August Oberwelland. It appears that in Germany the company may have been initially called Werther’sche Zuckerwarenfabrik. The company started off in the small town of Werther in Westphalia, Germany.

The Man That Invented Werther’s Original

The man responsible for the invention of Werther’s Original is Gustav Nebel. Mr. Nebel was among one of the first employees for the company and maybe one of the original 3 workers it has been rumored that August Storck began his company with. Gustav Nebel was said to have invented Werther’s Original shortly after the companies founding and that he used high-quality ingredients to make it with, such as real butter, fresh cream, white and brown sugars. It was said to be put a lot of time and care into making the product. 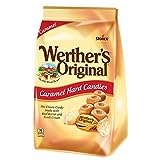 You can also buy Werther’s Originals at Old Time Candy by clicking the image below.

Here is a list of the different flavors, types, and varieties of

Here are the ingredients of Werthers Original.

Werther’s Original reminds me of my Grandma and being a kid again. Whenever I used to get dropped off at my Grandmother’s house as a young child to spend a weekend she would always have a candy tray of Werther’s Original caramel hard candies. It was as old-fashioned as you could get, the little caramel hard candies in their classic dish, but it reminds me of my childhood and of heart and home.

They are delicious of course, sweet, and convenient to eat. They have a special place in many people’s hearts because it makes them think of where they came from. It is rare I eat them anymore, but I will always remember them fondly.

Being in the market since around 1903, there is no denying that Werther’s Original seems to have done fairly well for itself. The candy may not be number one on the market shelves at the moment, but some consider it to be a classic, and the name of the candy itself has a classic-sounding ring to it.

The popularity of this candy could be partly due to its age, being around for so long has allowed Werther’s Original to spread among several generations and some people tend to take things like that to heart. It could be that some have an affiliation for experiences they had as a kid, something Werther’s Original has a bit of an advantage with.

Read About More Snacks and Candy!

Fruit by the Foot

Fun Dip is a candy product that includes powder candy in pouches that can be eaten with a candy stick that is included in the bag. Read more here!