Amp is one of the energy drink products that PepsiCo has created since energy drinks hit the market. PepsiCo already markets Mountain Dew, and the Amp product was a natural extension of this sugary soda product that has long been marketed as a pick-me-up for those who are getting tired in the middle of the day. Energy drinks and sodas are not always marketed side-by-side, but here are a few crossover products like Amp energy drink that have had staying power.

Amp energy drink is not actually Mountain Dew, but it was marketed as Mtn Dew Amp before being converted to a standalone product in 2009. There were some early bonds between sodas and energy drinks that were later dissolved when consumers seemed not to look for sodas for energy drink properties. And really, energy drinks are not much like sodas when they are consumed, so it was probably reasonable for all of the various companies trying to make soda energy drinks change course.

Amp was originally marketed as Mountain Dew Amp and was sold as a flavor extension of Mountain Dew itself starting in 2001. The labels for the product used to read, “Amp Energy Drink from Mountain Dew,” but this was changed in 2008 when the label started to say, “Amp Energy” and nothing else. The Mountain Dew logo was even removed from the center of Amp cans and is placed down at the bottom of the cans as something of an afterthought these days.

The new emphasis since 2008 has been on the drink being its own unique product that is intended to be an energy drink and not a soda. Amp does contain taurine, B-vitamins, guarana, ginseng, and maltodextrin like most energy drinks, and it has 74 milligrams of caffeine per every 8.4 fluid ounces. There are many flavors within the Amp brand now as well, which has helped to establish the product as a standalone drink that is not associated with the sodas that PepsiCo makes.

One of the interesting things about this product is that it does contain real sugar, which is not common in sodas or other energy drinks these days. For many people, this is one of the attractions as it makes the flavor someone better. You will not find as much of the artificial sweetener taste in this energy drink that is present in many others. This is the primary difference between the base formula for Mountain Dew as well. While the drinks share all the other components as far as base ingredients go, the sugar content in Amp is delivered in part by real sugar.

There has been a move to discontinue more of the citrus flavors of Amp in recent years, but many people who love them are still hoping that the Orange flavor will come back as promised back in 2013. This change might be because most of the flavors are already considered to be fruit flavors, so it is a bit redundant to have specific fruit-flavored versions when all of the various Amp products are meant to be fruity in nature.

As with all energy drinks, Amp can be associated with irregular heartbeat, heart failure, anxiety, insomnia, and increases in blood pressure. These products should be consumed with care by those who have heart issues or blood pressure concerns. Children should also not be given these drinks frequently as they are not made with child-size portions of the active ingredients. There are many such products on the shelves of stores these days, and all of them carry the same warnings about heart health and blood pressure concerns. 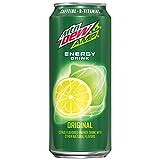 These products are sold in 12-ounce bottles, and they are made with most of the same energy-increasing ingredients as the regular Amp products. There is also Amp Energy Gum which offers B-vitamins, taurine, and caffeine in each stick.

Amp announced in 2013 that the orange flavor would make a comeback, but there has been no stated timeline for when this will take place. For those who loved this version of the Amp Energy Drink, there is no way of knowing when this favorite will be back on the market.

In 2018, Mountain Dew Amp Game Fuel was added to the lineup of products under the Amp trademark as well. This is the former Game Fuel drink line that was not an Amp product that has been rebranded and associated with Amp. These drinks are sold with resealable lids and are sold specifically within a few esports communities. These are not products that you will be likely to see in your local store.

From an online listing for the original product:

The ingredients for some of the other varieties and flavors might differ from this original version of the recipe.

Amp in Other Countries

In the UK, there was an Amp branded energy drink that was sold under license from PepsiCo by Britvic. This product was launched in 2013 and released under the Mountain Dew logo with a UK-specific livery. These cans of energy drink stated that they were “powered by Mountain Dew” and that they had 31 mg of caffeine which is more than the Mountain Dew Energy products that proceeded them. The drink was discontinued in 2017.

Amp began being sold in Canada in the mid- 2000s. Today, Amp products are only sold in Canada at Dollarama locations and just in Orange Citrus and Mixed Berry varieties. Canadian Amp is not Mountain Dew branded anymore, and it is sold as its own unique local product these days. This might be the only place to source an orange flavor of Amp if you loved the original Orange variety and were sad when it was discontinued.

This product has not caught on in other countries, but this is likely due to the focus in the European food market on healthier foods and reduced amounts of sugar in all kinds of different food items. Sodas and energy drinks do not usually meet the requirements of these stringent standards and must be sold in smaller servings sizes or are not allowed to be on shelves at all. These factors limit products that are made for the US market and make it hard for them to be sold successfully in the UK or other locations in Europe.

PepsiCo is always protective over its products with regard to altering them for sales in other markets. They do not commonly engage in this kind of sales practice, and this might be because they are getting more than enough sales in the US to support the products that they are continuing to produce. European markets and those of other countries are trying to shift away from products like Amp, which is why Amp is not common in other countries.

Amp was a title sponsor for the NHL Winter Classic game on New Year’s Day in 2008, and they have also sponsored Kevin Lepage during the 2006 Daytona 500. There are various other NASCAR sponsorships that have taken place over the years as well, which is why there was formerly a Tradin Paint version of the drink. These products were also marketed with a limited-edition Earnhardt Jr. theme.

PepsiCo has long been associated with Talladega Superspeedway, and they often use Amp products for different sponsorship deals at this location. These sponsorships have led to well-known campaigns like The Legend of Hallowdega. Amp has also been the sponsor of various snowboarding teams and for various snowboarding championships.

A newer ad for the product focuses on how it gets you hyped up for whatever you have to do during your day:

A weightlifting version of the ad with the same message about getting you ready to tackle tough tasks:

There has even been an Amp Superbowl commercial that raised some eyebrows due to its content of it. In this strange ad, a man is able to jump-start two cars after drinking Amp by placing the clamps for the battery charger on his nipples.

A bull riding version of the ad: