Mountain Dew is one of Pepsi’s most popular soft drinks that has added billions to Pepsi’s revenues. In Mountain Dew’s 80 year history, it has grown a large group of loyal fans that love the drink.

Here is the history of how Mountain Dew became one of PepsiCo’s most popular drinks. Going from its creation in Virginia to the development of numerous flavors, and the gaming community’s embrace of Mountain Dew.

The creation of Mountain Dew

The first Mountain Dew formula was created by two beverage bottlers from Tennessee named Barney and Ally Hartman in 1940. During this time, sodas and soft drinks were more regionally sold and many top sellers weren’t available to them.

Ally and Barney Hartman weren’t trying to develop their own soda. Instead they were trying to come up with a mixer that would taste good with alcohol.

One day when the brothers were giving samples out on a train, they would meet Charles Gordon. The co-owner of a popular regional beverage called Dr. Enuf.

Gordon would strike a deal with the Hartman brothers to bottle their drink at the Tri City Beverage Corporation. Unfortunately, Barney Harman would die a few years later in 1949 and left Alliy as the sole owner of the drink.

In 1960, Bill Bridgforth, who owned the Tri City  Beverage Corporation, would alter the flavor of Mountain Dew. Mixing the Tri-City Lemonade flavored drink that tasted like the drink 7Up with Mountain Dew.

This formula would become the original Mountain Dew flavor that is still used today.

In 1964, the Pepsi-Cola company would purchase the rights to Mountain Dew. Pepsi would begin coming up with a marketing strategy to release the drink within a year.

Mountain Dew started to get shipped around nationally and also in Canada. The first marketing used to sell Mountain Dew with a cartoon man called Hillbilly Willy.

Numerous commercials featuring Hillbilly Willy would be released during the 1960s. In them, he would shout the early Mountain Dew catchphrase, “Yahoo! It’ll tickle your innards!”

From 1964 to 1987, there was only one flavor of Mountain Dew sold, which was the original citrus flavor. In 1988, Pepsi released the second Mountain Dew drink called Diet Mountain Dew.

Mountain Dew would often be used to advertise various new movies and video games prior to their release. A lot of these flavors would be limited time releases and would create a fervor with Mountain Dew fans.

In the early 2010s, PepsiCo would rebrand all of their soft drinks, which included Mountain Dew. They would change the logo to a more shortened version of the name Mtn Dew.

As of today, this is the logo that is still used on Mountain Dew bottles and cans.

Over the years PepsiCo has had agreements with numerous fast food chains to sell Pepsi owned drinks. Pepsi and Frito Lay would later purchase some of these fast food chains that included KFC, Pizza Hut, and Taco Bell.

Taco Bell in particular would be the most prominent fast food restaurant to sell Mountain Dew flavors. A Taco Bell exclusive flavor called Baja Blast was even created to only be sold at Taco Bell restaurants.

During the 1990s during one of the first rebrandings of Mountain Dew, they began to be marketed within action sports. Everything from skateboarding, BMX, and snowboarding would advertise Mountain Dew as the action sports drink.

Mountain Dew and the gaming community

Mountain Dew marketing has specifically targeted the gaming community. This marketing towards gamers has created a diehard fan base of gamers that love Mountain Dew.

So much so that gamers make up the majority of purchases of the drink. These sales have been fueled by releases of different flavors of Mountain Dew to promote different video games.

Everything from: Halo games, World of Warcraft, and Call of Duty inspired flavors of Mountain Dew. Pepsi has even released their own line of Mountain Dew drinks dubbed Gamer Fuel.

Who came up with the name Mountain Dew?

Mountain Dew is a slang term for ‘potion’ that is of Irish origin. The term was used in the mountainous areas of the southern US as a nickname for moonshine.

The name was suggested by Carl E. Redski, who was at a meeting between the Hartman’s and Owens-Illinois Inc.

This name would stick and the Hartman brothers would trademark the name Mountain Dew in the 1940s. It would later be owned by PepsiCo, who have been the owners of Mountain Dew for nearly 60 years.

The sale of Mountain Dew is actually prohibited in multiple countries across the world. This is because one of the ingredients in Mountain Dew called brominated vegetable oil(BMO) is outlawed in numerous countries.

BMO is considered a toxic chemical that may cause organ damage, birth defects, and even schizophrenia. 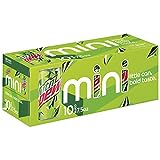 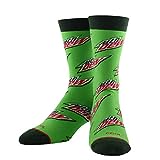 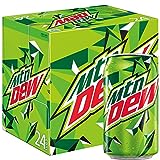 Mountain Dew has never been one to shy away from introducing flavors. For the past few decades, they have released nearly a hundred different flavors of Dew.

They have even started releasing limited time yearly batches. Here is a list of nearly all of the Mountain Dew flavors that have ever been released.

Mountain Dew has developed a loyal fan base that love the drink and try every new flavor that is released. This loyalty has led to PepsiCo adding billions to their annual revenue.

Their die hard fan base will keep buying their favorite Mountain Dew flavors and try all of the new Dew flavors. Expect Mountain Dew to release more flavors to be released for their loyal fans to try.

How much caffeine is in Mountain Dew?

There is 54mg of caffeine in 12 oz of Mountain Dew.

How much Sugar is in Mountain Dew?

The Mountain Dew brand and production rights were acquired by the Pepsi-Cola company in 1964.

When was Mountain Dew created?

How many Mountain Dew flavors are there?

There have been 35 different flavors of Mountain Dew since it was created in the 1940’s.

What flavor is Mountain Dew Frostbite?

Frost Bite Mountain Dew flavor is Cool Melon and that is blue in color.

What flavor is Mountain Dew Voodew 2021?

Where was Mountain Dew invented?

The original formula was invented in Knoxville, Tennessee in the 1940s.

The original formula was invented in the 1940s by Tennessee beverage bottlers Barney and Ally Hartman and was first marketed in Marion, Virginia; Knoxville, Tennessee and Johnson City, Tennessee.

What is the Mountain Dew mystery flavor 2021?

How much caffeine is in Mountain Dew Kickstart?

There are 92 milligrams of caffeine for a 16-ounce can of Mountain Dew.