Dr Enuf is a soda product that is made by Tri-City Beverage in Tennessee. This is one of the best-known soda products in Tennessee, and many people from this part of the US would be shocked if they heard that other people around the country are not familiar with this popular product. This is a soda that might remind some people of Sprite or 7UP, but it is just different enough to have its own loyal following.

Dr Enuf is a common presence at sporting events, fairs, and other venues in Tennessee, and if you have never tried this lovely product, you might need to do so. This soda has been around for years, and it really is quite tasty if you like clear sodas.

This product dates back to 1949 when William Mark Swartz encouraged coworkers to help create a soft drink that was supposed to be fortified with vitamins and minerals. This was supposed to be a better soda product that was not full of empty sugars and calories like other soda products on the market. The idea behind the soda’s marketing was that it would create a boost of energy due to the added vitamins and healthy ingredients that other sodas could not.

The original recipe was purchased by Swartz from a family member and modified to make it tastier. The original idea was that the product could be used as a mixer. This was actually how most sodas were sold at this time, and mixing was the primary focus of these brands until the late fifties. The pick-me-up aspect was really meant to be a bonus that you could add to your cocktail that you rewarded yourself with when you got home at the end of a long day.

The company sold the first product as a four-pack that cost 98 cents. This made Dr Enuf four times as expensive as other competitors’ products at the time. However, with the healthy lifestyle veneer that was used for marketing it, and its place in the soda niche as a mixer for expensive alcohols, this was likely not much of an obstacle to those who were buying Dr Enuf originally.

The thirst-quenching aspect of the product did not matter at this time either, and since it was not being marketed to kids, it was not that important that it be bottled in large bottles or sold at a lower price point.

The recipe for Dr Enuf has not changed much in the last fifty years or so, and you will be drinking something that is basically the exact same product as the Dr Enuf that was on shelves in the late forties. With the exception of some diet varieties and the herbal version of the drink that has been added more recently, the original product is still much as it ever was.

The last forties and the fifties were a time when the line between candy and healthy food was often blurred. There were all kinds of candy bars that were sold as “complete meals” which could replace an actual dinner or lunch, and “diet” products that were full of sugar were advertised everywhere. It was really not that strange for a soda company to suggest that their product might be healthy for you, even if that seems crazy to people today.

The blurry line between healthy food and quick meals lingered well into the 1970s when children were often home alone before and after school as more and more women headed to work. Cereals were often advertised as being able to prevent heart disease and cure other major physical ailments as well. These kinds of claims were cracked down on when the link between cancers and other disease processes and sugar became well-known. Many people required some convincing that the products that they had thought of as “healthy” were actually probably not very good for them at all.

The Dr Enuf slogan was “Enuf is Enough!” This was due to the fact that each can was full of an “energy booster” fortifier, which included B vitamins, caffeine, and cane sugar. To top this off, the product was originally also marketed with the claim that it would help with stomach ailments and indigestion. Mrs. Dan Smith of Elizabethton, TN because one of the first people to claim that her digestive ailments had been cured by Dr Enuf. She stated that she could eat anything that she wanted to again, all due to Dr Enuf.

Dr Enuf was also marketed as a hangover cure during its early days, and the company was not afraid to state that it could clear your mind if you were feeling foggy or tired. The early advertising as a hangover cure actually coincided with Mountain Dew making the same claims, but Mountain Dew was sold as an actual drink mixer rather than the item that you drank the day after a night of partying. Tri-City also made Mountain Dew at the time as well, but later sold the rights to Pepsi and kept Dr Enuf for themselves.

Tri-Cities Beverages still makes Dr Enuf, and they still claim that there is enough Vitamin B1, thiamine, potassium, and iodine in this drink to give you what you need to feel great every day. There is also an herbal version of the soda that is made with ginseng and guarana and which is said to offer these added natural benefits along with the other vitamins and minerals that are supposed to comprise up to 80% of your recommended daily requirements for these substances.

Dr Enuf is mostly only sold in the state of Tennessee, but it is also offered in select Cracker Barrel locations throughout the Southeast and at Pal’s restaurants too. This is one of the snacks and treats that you might have to order online if you want to try it in other parts of the US. You could also just head to Tennessee, where it is on offer at most restaurants and grocery stores, as well as event locations.

While it is not all that likely that you will experience a significant improvement in your health due to drinking this soda, that does not mean that you cannot still enjoy its bubbly, light, clear soda taste. For those that are fans of other clear sodas, this product will be a treat.

The product has recently begun being sold in Plastic bottles to help widen distribution as well. The company has always sold Dr Enuf in glass bottles, which has contributed to its old-timey image that is so popular with its fan base. This change will make it much easier to order your Dr Enuf online and have it sent to you as well. If you love glass bottles, you can probably still order Dr Enuf in this original packaging, but it’s nice to have the option for shipping and storage purposes.

The company has stressed that the change in bottling style is still intended to benefit the area in and around Tennessee that they have always sold to. The shift to bottles that are not made of glass is really only aimed at making sure that Dr Enuf can be sold at certain sporting venues and in vending machines in the state of Tennessee. They have made it clear for years that they do not intend to extend the marketing plans for this drink. They contend that they have carved out a niche for the soda in Tennessee that they can readily manage with their current plant and production processes and that this is good enough for them.

For a product that has a cult following, this shows remarkable constraint on the part of the owners of Dr Enuf. This is probably wise, however, as the soda market is very competitive, and Dr Enuf already has plenty of competition in the clear soda category. While loyalists to the brand would argue that this is the best of the clear sodas, it would be difficult in many places for Dr Enuf to outpace sales of products that are much better known that are made by Pepsi and other huge companies. Sometimes staying local is the best for products that have a large fan base and that are succeeding in one part of the country with ease. 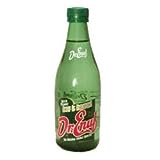 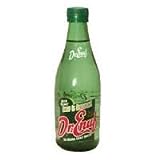 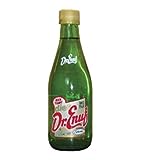 From a Kroger entry:

The brand does not make any claims about allergens or being free from allergens.

A documentary about the product made by Tri-City Beverages which talks about the company as well as Dr Enuf itself:

News entry about the change to Dr. Enuf bottling:

An ad for Dr. Enuf that was read during a radio show in The Tennessee area: