Candy is a favorite treat for kids and adults all around the world. From the little M&Ms to the Hershey’s chocolate bar; from the fluffy, dreamy cotton candy to lengthy, twisted strands of licorice, there is something for everyone. But nothing compares to the flavor of SweeTarts.

A SweeTart is a special kind of candy that is so little but so flavorful that it fills your entire tongue with joy. The candy starts somewhat sweet before becoming quite sour.

If you are a SweeTARTS lover or are just curious to know more about it, this article will provide you with all the essential and interesting information.

Have you ever heard anything about the candy brand Sunline? Well, it was an innovative confectionery company created in 1952. Other than SweeTARTS, the company is a manufacturer of Pixy Stix — unique straws that have a delicious, sugary treat inside of them. The second delicious delicacy created by Suncline Inc. was Lik-m-Aid, which comes with a solid white candy stick that is dipped in the powder and then licked off. There are three distinct varieties of powdered candy in these tiny envelopes.

Parents, though, were asking for candy that wasn’t quite so sloppy. Consequently, the SweeTART was unveiled in 1963. The little round candies had the same taste as Pixy Stix when they were made.

Sunline Inc.’s company name was changed, and it was renamed Sun Mark, Inc. Then, in 1975, it bought Breaker Connections, which produced the Wonka Bar, Scrunch Bar, and Oompas. In 1980, it changed the acquisition’s name to Willy Wonka Brands.

As a result, the Sun Mark Companies also became the parent company for the companies Sunfield Foods, David & Sons, and Sunline Brands, in addition to other subsidiaries that assisted with its production and distribution operations. Sun Mark first released Nerds Candy in 1983. Rowntree Mackintosh Confectionery of the UK purchased it in 1986. Sun Mark of St. Louis’ group of businesses was ultimately acquired by Nestlé.

SweeTARTS are sour and sweet candies that were developed in 1962 under the supervision of Menlo F. Smith, CEO of Sunline Inc. A Sun Mark company employee is responsible for the idea of creating Lik-m-aid. According to the story, his children were eating sour drink mix powders as candy. Fun Dip is formed from a sugar paddle that is used to dip into a sugar packet. But Sun Mark staff members didn’t stop there. They multiplied that one concept into several other variations.

Pixy Stix was the next phase since Lik-m-aid became not so easy to consume without making a mess. And of course, as any good candy maker would, the company strived to make the most out of the resources to make something unique. Sun Mark took Pixy Stix and turned them into a tablet as a result. This is how the SweeTARTS were created.

The following stage involves using SweeTARTS and heating them in a method known as “pans,” which results in a sugar shell on the outside. This is how the Sprees were created. Thus, St. Louis is the origin of Fun Dip (Lik-m-aid), Pixy Stix, SweeTARTS, and Sprees. All this is thanks to certain youngsters who choose to disregard the dietary laws and have very watchful parents.

The SweeTART treat was provided to expand the market for the acidic flavor. As already mentioned above, the candy was made using the same basic formula as the existing and well-liked Pixy Stix and Lik-M-Aid (Fun Dip) brands. SweeTARTS were first made available in 1963 and came in the same flavors as the well-liked Pixy Stix: cherry, grape, lemon, lime, and orange. With the brand name Spree, a candy-coated variation was released in 1966.

Back in the time when SweeTARTS were invented, another business was already using the name- “SweeTARTS.” Fruit that has been glazed or candied was offered by the SweeTart firm in Dundee, Oregon. Despite initial attempts at success, the business failed to sue Sunline Company in 1964 for using the term SweeTARTS on their product. The Sunline Company prevailed in the lawsuit because the original patent was no longer valid as a result of non-use.

What are the Ingredients Of SweeTARTS?

SweeTART ingredients include malic acid, maltodextrin, dextrose, a small amount of calcium stearate, natural flavors, and artificial colorings. There are no gluten-containing components in the original sweets.

Nevertheless, a small number of products include wheat. The potential for cross-contamination is quite significant if all the items are produced in the same location. The product may contain eggs, according to the ingredient list on the candy package. As a result, SweetTARTS candy is not vegan.

The candies have a sour flavor since citric acid is present in them. Your tongue and inner cheek will ache if you continue to eat sour candies. The sweets are small enough to eat comfortably and resemble tablets.

Nestlé switched the original lime for green apple in 2002. The company ceased producing lemon flavors in 2009. However, it was reinstated in the flavor range in 2013. Grape (purple), Blue Punch (blue), Lemon (yellow), Cherry (red), and Green Apple (green) are the current flavors of SweeTARTS rolls. Lime and Orange are the flavors no longer available.

SweeTARTS, the first sweet and sour pressed candy created in 1962, has grown to provide much more than simply the classic rolls. Currently, there are 14 varieties for both children and adults to enjoy. Most of these variants may be grouped into one of three groups: original, chewy, and ropes. To be more specific, giant tablets, ropes, chewy candies, lollipops, sour candies, and gummies are also produced by them.

Since its first appearance, the SweeTARTS brand has been loved by all. That is why the manufacturing companies did not hesitate to create modifications and new versions. The variations of SweeTARTS include SweeTARTS Jelly Beans, which are typically marketed for Easter; little Sweet Tarts, which are packaged for Halloween; and SweeTart “Hearts,” which are marketed for Valentine’s Day.

In addition to the special occasion candies, the brand also manufactures gums and licorice candy. One of the most popular and cherished variations is Giant Chewy SweeTARTS. They are large, and unlike the original SweeTARTS, they are chewier.

Each package comes with four individual candies. They are 14 inches thick and the size of a silver dollar. This version and the Mini Chewy SweeTARTS are the only ones that have maintained the discontinued orange flavor.

Soft & Chewy Ropes is one of the most popular SweeTARTS variations. At first, they were called Kazoozles and came in cherry punch flavor.

SweeTARTS has a unique design that has the same color palette for all of its products; however, each of them also has its own distinguishing characteristics. Pink and blue are two major colors presented on the candy brand logo and packaging. On the right side of the package, each variation of candy shows the visual side of the candy that comes in the package. On the left side of each product, there are images of the fruit flavors that the candies in the package have.

SweeTARTS eventually won the Food + Beverage category of the 2021 GDUSA Package Design Award. This yearly event honors beautiful visuals, of course, but it also emphasizes how powerfully great design can promote a brand promise and create an emotional connection with the customer at a crucial moment.

The brand frequently solicits feedback from its consumers and fans before new products are introduced. For instance, they ran a competition in 2018 to choose the next flavor to be introduced to their SweeTARTS gummy candy. They chose the smartphone as the next gummy form from among the more than 3,000 entries they received. Additionally, the company provided a year’s worth of SweeTARTS gummies to the fan who submitted the proposal.

SweeTARTS does not, however, solely use distinctive forms to appeal to fans. Additionally, their “Be Both” marketing slogan and partnerships with famous people like fashion designer Christian Siriano have been seen as a subtly supportive gesture for non-binary gender identities. SweeTARTS is adapting with the times and most likely will continue doing so in order to remain relevant with such an open-minded mentality.

Superhero fans may already be aware that SweeTARTS and Warner Bros. recently worked together to promote the 2020 movie Wonder Woman 1984 by releasing a tropical punch flavor of SweeTARTS ropes. The press coverage of this announcement, however, demonstrates how seriously the company approaches its marketing partnerships.

SweeTARTS was first offered by Sunline in 12-count, individual foil-wrapped packs that cost around 5 cents each. They sold quickly as a result of extensive marketing. In 1964, more than $8 million worth of SweeTARTS were sold. 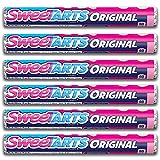 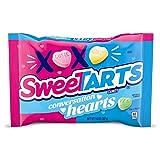 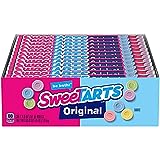 You can also buy SweeTARTS at Old Time Candy by clicking the image below.

The original SweeTARTS candy was invented in 1952, and since then, it has maintained the fame and love of all people being a delicious candy that makes great stocking stuffers for Christmas and Easter.

There are approximately 14 SweeTARTS varieties available, but none of them compare to the original, which was invented many years ago. It remains one of the most well-liked sweets on the confectionery market.