If you haven’t tried SweeTarts Ropes, you are missing out. This is a fairly new candy and they take a mix of a Twizzler style candy and fill it with some delicious and delightful flavor and mix it together into this chewy, sweet rope with a classic sweet-tart flavor.

SweeTarts Ropes have only been out for a few short years. They were released in 2015. The goal behind the ropes was just to find another fun and unique way to use sweet and tart flavors like the brand is known for.

Interestingly enough, SweeTarts Ropes was actually originally going to be called Kazoozles instead of Ropes. This was part of the Wonka candy brand. Kazoozles had exactly the same concept and style. Wonka sold to Nestle and this candy was rebranded and re-released as SweeTarts Ropes in 2015.

There was a press release around the time that these came to market and it described the ropes as an “electrifying burst of sweet and tart flavor combinations”. Now, SweeTarts ropes actually come in a few different flavor options as well but the original flavor was cherry punch.

Cherry punch brought together cherry tartness and a sweet punchy filling. The ropes are both soft and chewy and about the same length as a Twizzler.

One unique quality about SweeTarts ropes is that they are made with no artificial colors or flavors. They are loaded with sugary sweetness but they still have this going for them. In today’s world, this is a remarkable quality that really stands out for us.

SweeTarts produced the ropes in an effort to highlight the brand. The ropes are considered to be a marque product for that effort. They also introduced several other SweeTarts items at the same time, including chewy sours, mini chewy tarts, gummies, and even a SweeTarts roll. All of those things came out early in 2015, along with Sweet Tart Ropes.

It was the perfect way to re-launch the brand and add new and exciting things to the collection and it seemed to go over really well. You get a modern twist to a classic candy but you still keep the same great qualities that SweeTarts were always known for and the things that people loved most about them even.

The ropes come in a ton of different varieties now but you can always find the classic flavor option and it comes in various packaging sizes as well so you can get some just for you or get a package to share.

When Were SweeTarts Ropes Invented?

SweeTarts Ropes actually stemmed from a candy from Wonka that was called Kazoozles. It’s the same great concept but when SweeTarts changed ownership from Wonka to Nestle, a lot of things changed. In fact, the brand disappeared for a while there.

SweeTarts Ropes as we know them were introduced to the world in 2015. They were the segue to the return of the SweeTarts brand after a hiatus and the ropes were THE PRODUCT of the launch at that time.

At the same time, several other candies were launched under the SweeTarts name as well. The tasty treats that are both sweet and tart came out as a cherry punch flavor in 2015. The brand has since built onto the line with other flavors and even some different options for types of SweeTarts Ropes.

In just a few short years, these tart and sweet candy ropes have come a long way and made a bit impression.

At this time, SweeTarts Ropes are owned and produced by Nestle. They have always been under Nestle as this name and the particular type of candy but the inspiration and the candy itself actually came from the earlier creation that was part of the Wonka candy line.

Wonka candy had almost the exact same thing as called Kazoozles. The Wonka line was absorbed by Nestle and pretty much totally re-branded at some point. A lot of classic candies were changed or discontinued and then some like Kazoozles were made into something different but still exactly the same.

In this case, Kazoozles became SweeTarts Ropes in 2015 when Nestle changed the name and the branding and launched a whole new identity for their Sweet Tarts line. It was a great way to take a delicious treat and reinvent the wheel with Nestle at the forefront of the system.

SweeTarts was always a high-selling brand by Nestle so they jumped on an opportunity to attract people to this line by adding to the SweeTarts line with ropes (previously Kazoozles) and several other fun new candies around the same time. It was almost like a brand new launch.

How Did SweeTarts Ropes Get Their Name?

If you take a look at this candy, it almost resembles a rope. It’s about the same length as a Twizzler and it has a soft but tart filling inside. The name rope was just a simple description of the candy for what it was.

Prior to this time, this almost identical candy was called Kazoozles under the Wonka brand but all of this was restructured and rebranded by Nestle in 2015. 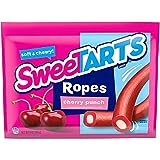 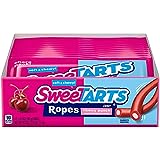 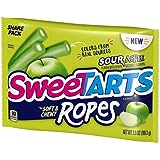 You can also buy SweeTarts Ropes at Old Time Candy by clicking the image below.

The initial flavor of SweeTarts ropes was just their traditional cherry punch flavor. That was the only flavor available at first and for quite some time but the brand has since added some additional flavors and fun styles to SweeTarts Ropes.

The cherry punch flavor still remains the primary flavor but they have also added just a few other options and even some bites that are a bite-sized version of the ropes and coated in a sugary coating to make them a little something different.

Here are the flavors you are most likely to find.

We already mentioned that the bites are sugar-coated, which sets them apart just slightly from the ropes.

The twisted variety of SweeTart ropes are really neat also. They have a twisted, swirling colorful and full flavor. The rainbow colors twist around every rope and they are filled with fruity flavor.

All of the varieties across the line are made with no artificial colors or flavors so the brand stuck to that philosophy across the board.

Here are the ingredients of SweeTart Ropes, taken from the official website.

SweeTart ropes are really pretty easy to find. You can find them at regular retail stores as well as grocery stores. Your favorite local grocery store most likely has at least one flavor option in their candy aisle so we recommend starting there somewhere you visit regularly.

If you want to purchase online, you can go to Amazon or find online resources directly from the SweeTarts website that directs you to options as to where you can buy online.

You can find these just about anywhere!