Nutella is the undisputed king of chocolate spreads that is immensely popular throughout the world. In just about every part of the world, Nutella is loved by the masses and large quantities are sold daily.

Here is the full story of Nutella and how it became the most popular chocolate spread in the world. Going from when it was first sold in the Ferrero family bakery to becoming internationally loved.

Before Nutella took over the world, it was sold in a different form at the Ferrero family bakery in Alba, Piedmont. A small village in Italy that is known for producing hazelnuts, wines, and truffles.

Pietro Ferrero was a pastry chef that owned the bakery in Piedmont decades before Nutella was introduced.

One day, he noticed that his workers would bring bread with them to make sandwiches to eat during their breaks. This gave him the idea to develop something sweet that they could eat as a dessert with their sandwiches.

He began looking at a type of chocolate paste he already made called gianduja. An early version of Nutella that wasn’t as creamy, but also prominently included hazelnuts in the recipe.

Ferrero would spend years developing the Nutella recipe from the gianduja paste. Attempting numerous recipes to make the paste more creamy and spreadable on bread.

The first attempt of making a hazelnut chocolate spread that Pietro came up with was “supercrema gianduja.” Ferrero spent years coming up with this recipe and testing it in his bakery.

This was a more creamy version of gianduja that his workers could spread on bread as a sweet snack.

Pietro would pass away in 1948 and his son Michele Ferrero took over as the owner of the family bakery shortly after. Michele continued work on his father’s supercrema gianduja recipe.

He would begin selling this first alliteration of Nutella in 1951 in jars at the bakery. The spready became quickly popular within the town and made the Ferrero bakery a nice profit.

Supercrema gianduja would be old for over a decade and gain quite a bit of popularity in Italy. But Michele saw that the spread could be an even bigger success and wanted to market it throughout Europe.

Although due to an Italian law passed in 1962, brand names could no longer include superlatives in them. This forced Michele Ferrero to have to change the name of the chocolate spread.

He began tweaking the recipe and renamed the spread as Nutella. The very first jar of nutella was sold in 1964 and it quickly gained popularity.

Right after Nutella’s initial release in 1964, it quickly took over Italy as the country’s favorite sweet. Italians couldn’t get enough of it and every Italian family had a jar of Nutella in their homes.

A lot of the spread’s success was due to their brilliant advertising campaigns early on. In 1967, the iconic Italian Carosello tv ads debuted, which made Italians fall in love with the chocolate spread.

Then in the 1970s, Nutella began being imported to other countries. The chocolate spread had grown as sort of a mythical legend in other countries that heard how good it was.

Once Nutella debuted in other countries, it also became very popular in them.

Nutella got so popular so quickly and took a grasp over the public much like Coca-Cola did. This wasn’t due to Nutella being so difficult to make, but how the product was marketed.

One of the biggest marketing campaigns that gave them global appeal was being the official sponsor of the Italian soccer national team. This created sentiment in Italy that Nutella was their spread and it was very special to them.

Another successful Nutella ad campaign was it being marketed as a well balanced breakfast food. A food that is healthy, delicious, and something every family must have. Even though it is a high fat chocolate spread, many people believed these advertisements.

How Nutella got so big in modern times was thanks to its social media presence and word of mouth. Nutella has become one of the best foods within various desserts.

Basically earning the same aurora that bacon has with salty foods. Now the feeling by many is if you want to make any dessert better, then you should add Nutella to it.

Since Nutella debuted, there have been many other chocolate spreads to come out, but nowhere near as successful. They taste similar to Nutella, but they don’t have that grasp over the public like Nutella has thanks to their campaigns.

Nutella’s success along with other products like Ferrero Rocher and Tic-Tacs made the Ferrero family incredibly wealthy. Going from moderately wealthy to billionaires after Nutella was available worldwide.

Before his death in 2015, Michele Ferrero was by far the richest person in Italy and 30th in the world. His widow Maria Franca Fissola inherited Michele’s wealth that is now estimated at 30 million euros.

The main ingredient in Nutella is the hazelnut, which is abundant where the Ferrero business is located in Germany. It was also the only option the Ferrero family had when developing the recipe in the 1940s.

WW2 had made supplies scarce and Pietro Ferrero had to work with what he had. Cocoa powder was nearly impossible to get, so he had to rely on what was available to use.

Pietro would develop the first recipe out of hazelnuts, cocoa butter, sugar, and vegetable oil. His son would then improve the recipe and make it creamier in the 1950s. 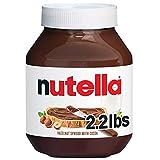 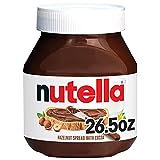 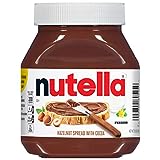 Interesting facts and legends about nutella

Here are some interesting facts and legends about the famous Nutella chocolate spread that you may not know.

Legends of how nutella was created

There are two legends of how Nutella was created by accident. The first is during a hot summer in 1949, the gianduja melted during shipment, so retailers sold it as a spread.

Another version of this legend is that the gianduja melted in the Alban warehouse. This would force Michele Ferrero to sell it and jars, which would lead to the development of modern Nutella.

Neither one of the legends have been confirmed, but it’s fun to speculate on how nutella was made.

Nutella is now made all over the world, but each location doesn’t use the same recipe. This is mainly due to the availability of the recipe’s original ingredients being in short supply in some areas.

For example, in the US and the UK, Nutella is made with soy products that are more readily available. Also because soy products were a cheaper option and the taste was nearly the same.

In some countries (including Italy), Nutella is not considered a chocolate spread. Instead it is considered a hazelnut spread due to it not meeting the required amount of cocoa to be considered chocolate.

Nutella’s use of hazelnuts

The Ferrero company uses 25% of the world’s hazelnut supply to make Nutella and various other products. Used to create nearly half a million tons of Ferrero products each year.

In 2012, the European Union voted on a bill to increase the tax on palm tripling the normal tax. Since one of the main ingredients in Nutella is palm oil, the media dubbed it “the Nutella Tax.”

In 2012, a lawsuit was filed against the Ferrero Company in the US for false advertisement of Nutella. This was due to their advertisement design that claimed Nutella was a healthy and well balanced breakfast food, when it wasn’t.

The Ferrero Company would lose the case and be forced to pay a $3 million dollar settlement.

Since Nutella debuted on the market in 1964, the Ferrero company has released various snacks that include Nutella. Here is a list of nearly all of the Nutella products that are available in various markets.

Due to the global success of Nutella, this helped the Ferrero company become the 3rd largest chocolate distributor in the world. The amount of Nutella sold each year is astronomical.

Some mathematicians have estimated that a jar of Nutella is sold every 2.5 seconds in the world. You could circumnavigate the world nearly twice with the amount of jars of Nutella said each year.

Nutella is by far one of the most popular foods in the world and will continue making the Ferrero family billions.

Nutella is the undisputed king of chocolate spreads that is immensely popular throughout the world. In just about every part of the world, Nutella is loved by the masses and large quantities are sold daily.

What is Nutella made of?

Where is Nutella from?

Ferrero, originally from Piedmont in Italy, turned this tricky problem into a smart solution by creating a sweet paste made from hazelnuts, sugar, and just a little of the rare cocoa.

When did Nutella come out?

The Nutella name was introduced in 1964, when the product was first introduced to the UK.

Where is Nutella made?

Nutella is produced in various facilities. In the North American market, it is produced at a plant in Brantford, Ontario, Canada, and more recently in San José Iturbide, Guanajuato, Mexico. For Australia and New Zealand, Nutella has been manufactured in Lithgow, New South Wales, since the late 1970s.

How much sugar in Nutella?

There are 20 grams of sugar in a single serving of 37 grams of Nutella.

How many Calories in Nutella?

There are 200 calories in a single serving of 37 grams of Nutella.

When was Nutella invented?

The product that became Nutella was created by an Italian bakery owner called Pietro Ferrero in the 1940s.

Nutella is owned by Michele Ferrero the owner of Ferrero SpA.

How many carbs in Nutella?

There are 23 carbohydrates in a 37 gram serving of Nutella.

What nut is in Nutella?

Nutella is made with hazelnuts.