If you like to have a little bit of a treat that contains a surprise within the treat, you just need to look up the Kinder Surprise Egg. In the United States, you will find the Kinder JOY egg instead of surprise egg but they are both equally fun and delicious.

These little eggs are known to host a secret surprise for you and the surprise may vary so you just never know what you are going to get. You get to enjoy a little bit of chocolate on the outside and a surprise egg inside. Who knows, maybe you won’t even eat the chocolate!

The Kinder Surprise egg was introduced to the world in 1974. It is sold under the Kinder brand, which is owned by Ferrero Candy company. These were made to copycat an Italian Easter tradition and were originally created thinking children would love them.

The tradition was that adults gave children chocolate eggs on Easter that were filled with surprises so Kinder took that theory and just made it into something small and memorable. You get some small toy item typically and they vary from time to time. The fun is you just never know what you’re going to have inside of your egg!

Of course, you just never know if something is going to be what you intended it to be or turn into something else entirely. With the Kinder Surprise egg, it grew beyond just children and became very popular with adults as well. In fact, you will find that some adults even collect the surprises inside of the egg.

It’s pretty exciting to get a little chocolate egg and just know that you’re going to get some random, awesome surprise inside of it. In the surprise egg, these surprises are not edible items. They are typically small toys.

Picture this. On the inside, there is a yellow plastic egg. The yellow is easy to see so no one accidentally eats it. Also, most people know to expect the surprise inside. Inside of that yellow egg is your surprise.

That little surprise plastic egg is then covered inside of a milk chocolate coating that has a creamy backing on it. The confectionary egg around the plastic breaks off easily so you can separate food from plastic and enjoy the chocolate.

Sadly, you won’t find the Kinder Surprise egg in the United States. There is a restriction from the FDA (Food & Drug Administration) that makes it illegal to add non-edible items inside of a confectionary item.

Instead, in the USA, you will find a very similar design with a bit of a twist. You still get the chocolate egg and a surprise but they designed it slightly differently to be in compliance with the rules. With this particular option, you open the packaging to discover a delight that is half chocolate egg and cream and half toy, as well as a spoon.

Kinder Joy was launched in 2001 but didn’t hit the United States until 2018 so it’s a relatively new option here. The laws remain the same so this was the brand’s way to get something similar to another market and still follow the rules to do so.

You probably won’t find the Kinder Surprise in the United States (legally) anytime soon but this makes a fun alternative with the same concept behind it.

When Were Kinder Surprise Eggs Invented?

The idea first came to Michele Ferrero of the Ferrero Candy Company in 1968. He liked the idea of creating a treat that children could have every day if they wanted to and get a little surprise from the treat.

He was inspired by the Italian tradition of placing gifts in big chocolate eggs for Easter and wanted to design something on a smaller scale that could be used any time for a treat. Originally, his idea was really not well received. Everyone doubted that these would be a hit and thought they would only be good for Easter candy sales.

This put a hold on the candy for a short bit. Ferrero felt like his original idea also needed some slight improvement so he took his time with those ideas and then hired William Salice to help bring his idea to life. Salice was able to do so and together they created the Kinder Surprise egg.

To date, more than 30 billion of these eggs have sold throughout the world. Even Ferrero and Salice were surprised at how well they did and they proved the doubts wrong. It was 1974 before they finally brought this product to market, 6 years after the original idea was thought of.

Kinder Surprise eggs and all of the Kinder line fall under the Kinder brand. This brand and the candies, including surprise eggs and joy eggs, are all owned by the Ferrero Candy Company. This particular brand has been so popular and has never changed hands from the time it came out.

Ferrero stuck to his guns on his original idea and it’s safe to say the company is probably appreciative of that fact considering more than 30 billion Kinder Surprise eggs alone have been sold since that day.

Their eggs are popular year round and not just sold or produced at Easter time. They continue to bring out new toys and surprises to find inside of the eggs so people don’t tire of the same boring thing and continue to look for new surprises, or even collect the surprises.

How Did Kinder Surprise Eggs Get Their Name?

The Kinder part of the name comes from the fact that these eggs are sold under the Kinder brand. They just branded the egg with their brand.

The rest of the name is pretty much self-explanatory if you think about it. These surprise eggs are filled with a surprise inside of an egg. It’s a classic name that tells you just what you’re getting. There was no need to come up with any fancy or creative name. They simply called it what it was, which is pretty rare in the candy world if you think about it.

Most candies will come up with catching names or even just make something up but they didn’t do that with this one and the name seems to be working just fine. 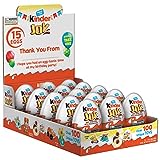 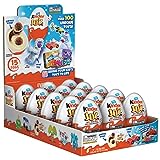 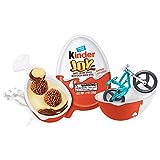 So we know that the Kinder egg is always milk chocolate with a creamy layer. The real “flavor” change comes from the different surprises inside of the egg. Obviously, this has nothing to do with the flavor but that is how they mix it up and keep bringing you something different and exciting.

You will find that there is the Kinder JOY egg. This is a rendition of the egg that was designed so that the surprise is attached to the chocolate rather than placed inside of the chocolate. They are still made exactly the same with the same flavors but just designed differently to meet regulations that are different in other countries.

Here is a list of the ingredients in a Kinder Surprise Egg.

Kinder Surprise eggs can be found online and in candy stores or retail stores in the countries where they are approved to be sold. You can check their website for more specific details on finding a location to purchase them but you can also just check out Amazon or online candy stores as well.

If you want to try one of these eggs but can’t get your hands on the Kinder Surprise eggs, go ahead and look for Kinder JOY eggs. You can find these at retailers like Wal-Mart and Dillon’s (Kroger) or at various candy shops and gas stations. You can also find this version of the egg online at places like Amazon as well.