When we hear the words “Ferrero Rocher”, the first thing that comes to our mind is the classy and iconic chocolate boxes that offer high-quality and delicious chocolate products for fair prices. Ferrero Rocher is a vintage brand of chocolate confectionery. It belongs to Ferrero International S.A., founded by Pietro Ferrero.

What is now a multinational company was once a small confectionery located in Alba, a small and very beautiful town in Italy. The foundation of confectionery was caused by the desire to create chocolate that would be not only high in quality but also accessible to all. Who knew that one day it would become one of the most popular boxed chocolates for millions of people?

Ferrero Rocher chocolate candies traditionally have a sphere shape. Each chocolate sphere is wrapped in foil and carefully placed on the paper liner. Candy is strongly associated with holidays such as Christmas and has become a part of the celebration culture in many countries. In particular, chocolate became especially popular in the United Kingdom in the 1990s era. The advertisement “Ambassadors” made everyone aware of its specifics.

The candy was introduced in Europe in 1982. However, in the beginning, there was a problem with the label printing, and the production had to be stopped for a while. The major part of the candy production process remains secret. There are no smartphones or any similar devices allowed in the facilities, and very few journalists have even been there. Production is mainly done with machinery.

The Ferrero Rocher chocolate boxes are sold in 42 countries, and the total number of candies produced every year goes up to 4.8 billion pieces.

The Ferrero Rocher group’s headquarters are in Luxemburg. It is a private multinational company that is owned by the Ferrero S.A. family. It includes 38 trading companies and 18 factories. In total, there are approximately 45,000 employees. One of the most popular and main products for them is Nutella. They produce around 165, 000 tonnes of Nutella every year. They have had a good reputation in the market.

It all started when Pietro Ferrero invented hazelnut and cocoa cream in 1946. It was wrapped in aluminum foil, and one was supposed to cut it with a knife. It was called Supercrema. So, later on, he created a company to sell his cocoa and hazelnut cream. His son, Michele Ferrero, continued his work.

Did you know that the founder of Ferrero Rocher was often referred to as a real-life Willy Wonka? Michele Ferrero was born in April 1925. He was the owner of Ferrero SpA and inherited the traditional Gianduja Paste (cocoa and hazelnut cream) business, Ferrero S.A., from his father, Pietro Ferrero. He joined a firm in 1949, at the age of 24, and managed to turn it into a multinational company. Once the owner of a small bakery, he managed to become the largest chocolate manufacturer.

Michele and his wife, Maria Franca, followed Pietro’s path, relaunched his recipes, and called it Nutella—first sold in 1964. Although it was already very popular in the 1960s, after World War II, Nutella became the most famous chocolate-nut spread in the world. Nutella production actually uses a quarter of the world’s hazelnut supply. Currently, the Nutella brand is run by Giovanni Ferrero, who is the son of Michele Ferrero. 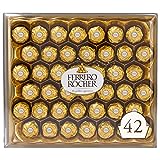 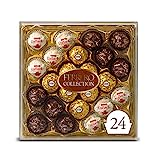 Most Famous Products From Ferrero Brand

Ferrero’s most famous products are undoubtedly their iconic Ferrero Rocher chocolates. The Ferrero Candy line mainly revolves around hazelnuts and almonds. The candy is famous for its multiple layers. And almost all sweets have a delicious, sweet filling of various creams.

Mon Cheri is one of the most famous brands of the Ferrero Company. This Italian chocolate candy is everything one could ask for. It has a cherry flavor that floats in the liquor and is surrounded by delectable dark chocolate.

The candy has pinkish-red wrappers. “Mon Cheri” is translated from French as “My Darling”. This retro candy was created in 1956 in Italy, and since 1960 it has been marketed in France and the UK. In the US market, Mon Cheri had hazelnuts but did not contain liqueur. So, it was kind of similar to Ferrero Kusschen.

At the beginning of the production process, the two flat wafer sheets with the hemispheres are filled with chocolate and hazelnut cream and whole hazelnuts. Then the wafers are transferred and clamped together, creating the ball of candy. Spheres are dipped in the chocolate and chopped hazelnuts, and the last layer is the milk chocolate. After the process is done, the candy ball is wrapped in the prominent gold foil.

The Ferrero Kusschen is one of the most loved chocolate candies by the Ferrero Company. “Kusschen” means kiss. Give a Kusschen to your friend! “, says everything.

Ferrero Kusschen was created and launched in 1968. Candy comes in the boxes. The regular boxes have either 5 or 32 pieces in them. There are also gift boxes that have 14 or 20 chocolate candies.

Confetteria Raffaello is absolutely different and not like any other product of the Ferrero Rocher company. It was introduced to the market in 1990. This candy is a spherical wafer that looks like a coconut-almond truffle and has a filling of white milk cream and roasted almonds. Surprisingly, it doesn’t contain chocolate at all. The wafer is finally dipped in the coconut layer, giving it a beautiful, snowy white color and texture.

Raffaello is associated with loved ones and celebrations. A wide range of products is sold on Valentine’s Day. It is an expression of love, feelings, and emotions. And the slogan says it all: “Raffaello – More than a thousand words”.

Giotto is another delicious sweet manufactured by Ferrero Rocher. Candy was launched in Germany in 1996. One can easily notice that it is named after a famous Italian painter and architect, Giotto di Bondone. On the package of the Giotto candy, there is a picture of the Campanile di Giotto building printed, which is located in Florence.

The candy consists of a waffle that has been crushed with hazelnuts and is filled with hazelnut and milk cream. The candy mainly contains hazelnuts, sugar, milk powder, cocoa mass, vanillin, and lecithin.

The summer edition of Ferrero Giotto is known as Giotto Almond. This summer treat is made with crushed almond pieces, milk, almond cream, and milk hazelnut cream. There is also a third variation, Giotto Cocoa Candy, mostly available in the winter. The candy variety has expanded over time. There are also lemon-flavored Giotto Dolcino, Giotto Cioccolato, Giotto Caramello, and Giotto Caffe available right now.

Ferrero Rondnoir can be considered a nice extension of the Rocher line. Three spheres of sweet candy are elegantly wrapped in brown foil, and they have a small sticker on top, stating that they are indeed Rondnoir.

Well, one may expect that they would taste like Ferrero Rochers, but not at all. The outer part of the sphered wafer is a chocolate crumble. There is a dark chocolate cream filling inside the sphere. The cream is very buttery and light, with a very balanced chocolate flavor. Even though it is entirely “chocolate” candy. It tastes more like cocoa butter. When eaten all at once, the rich cream, chocolate crumbles, and crunchy wafer create a perfect balance.

Pocket Coffee is manufactured by the Ferrero Company and is sold internationally. The candy first appeared on the market in Italy in 1968. The Pocket Coffee comes in individual wrappers. The outer layer is dark chocolate. At the heart of dark chocolate is liquid espresso.

The product was originally created by William Salice. He was the assistant to Michele Ferrero. He had conceived of the product in the 1960s. The majority of the candy was sold at highway rest stops. It targeted truck drivers and anyone who worked long hours on the road. It was a good source of energy, and the slogan says so too: “The energy of chocolate and the charge of coffee.”

Pocket Coffee is widely sold in Italy. The candy had some difficulties staying on the market in Europe. However, it is available to order online from anywhere in the world.

Ferrero acquired Ferrara Pan Candy Company in December 2017. Also in 2018, they acquired some of the very popular candy brands from Nestle, mainly Nestle’s American confectionery business. They purchased plenty of popular candies such as Baby Ruth, Crunch Bar, and Butterfingers.

The Ferrero Rocher Group also manufactures the popular Garden Koko and has a Kinder brand line, which includes the famous Kinder Surprise.

The Ferrero Garden series is a little different from the other Ferrero Rocher candies. While the signature color of the brand is golden with golden wrappers, this version has more colors in it, such as green, orange, pink, bronze, and white.

There are 18 Ferrero Garden treats in the box, in a total of 5 flavors. Flavors include coconut, hazelnut, pistachio, walnut, and almond. Each candy is individually wrapped in an airtight foil and has the flavors printed on top. The Garden Varieties are hemispherical rather than sphere-shaped like other Ferrero Candies.

Ferrero Garden Candy has a variety of chocolates. One of them is Garden Coconut, which somehow is similar to Ferrero Raffaelo. There is a coconut praline that is covered in chocolate. Candy consists of a wafer coating that has coconut rasps, then liquid fondant and almonds in the center. Altogether, the candy is the perfect balance of sweet cream, almond taste, and wafer crunch.

The candy spheres are individually wrapped. Once opened, the coconut aroma spreads around. On top, it has white chocolate and caramel sprinkles.

There is rarely a kid who does not adore Kinder Surprise. The candy became iconic and is loved by not only children but also adults. It is milk chocolate and has an egg shape. There is a yellow plastic capsule in the egg with the toy inside. The candy has been manufactured since 1974.

The Kinder Egg was invented by Michele Ferrero and William Salice. The treat replicated the Italian Easter tradition. According to that tradition, the children were given a chocolate egg that had toys in it. Since their appearance, more than 30 billion Kinder eggs have been sold around the world.

The milk chocolate egg has a layer of milk-flavored cream. The color of the capsule inside replicates the egg yolk. The colorful foil that surrounds each treat is absolutely beautiful and eye-catching.

Collecting Kinder Surprise toys has become a hobby not only for kids but for many adults as well. Toys mostly come in themed sets. Believe it or not, more than 12,000 different toys have been included in the Kinder Surprise.

Kinder Brand Candy has different variations, such as Kinder Joy and Kinder Bueno.

It took years to master the amazing Ferrero Rocher chocolate. However, after many tries, they created the “perfect” chocolate that is fancy, delicious, and loved by many people. The high quality and distinctive golden presentation make it impossible to not try this luxury treat. Ferrero Rocher chocolates are one of the best-selling candies in the world and will eventually cure any sweet tooth.

Which Ferrero Rocher candy is your favorite? Share your thoughts in the comments section below.