With its bright blue hue and sugary flavor, Pepsi Blue entered the drink market with a definite audience: Teenagers. Pepsi Blue was sold as a “Berry Cola Fusion,” but it appeared to be more berry than cola. The drink had a short life in the United States, offered from 2002 to 2004, but then it was reintroduced for a limited run in May 2021. It was available in Canada for the same period.

If you love and miss Pepsi Blue, you can still get it. You just have to travel to the Philippines, where it is still a popular item at soda fountains in convenience stores. Some people in Manila may remember it as Pepsi Pinas, as it was known in the early 2000’s. After building the success of Pepsi Pinas, the drink became a permanent member of the Pepsi line in the Philippines, and it was renamed Pepsi Blue.

Pepsi Blue is thought to be a mix of a blueberry and raspberry flavors, though it is officially simply called “berry.” The taste is very sweet. Some say it tastes like a syrupy liquid cotton candy. Pepsi invested a lot of time and money in developing the flavor for Pepsi Blue, taste-testing more than 100 concepts.

Alas, Pepsi Blue did not have the success Code Red had found, and it was generally considered a flop, despite extensive marketing efforts.

Pepsi Blue had high-powered promotion. Britney Spears, one of the most famous faces for Pepsi advertising, did commercials for the product for the U.S. market and in other countries, wishing thirsty folks in Vietnam a “Blue Christmas” with Pepsi Blue.

The marketing strategy for Pepsi Blue included partnering with big events, like the X Games, and product placement in movies such as “The Italian Job” and “Garfied: The Movie.” Pepsi also tried to get the attention of consumers by promoting Pepsi Blue after New York Mets games, tying the Mets blue with the Pepsi Blue blue.

The tie-in to sports events wasn’t just a tactic used in America. Pepsi Blue debuted in India in conjunction with the 2003 Cricket Cup. The Indian national cricket team was a natural tie-in, as they work blue uniforms.

Other promotions included passing out bottles at malls around the country – grabbing attention by driving them around in a new Volkswagen Bug with a Pepsi Blue theme.

One other marketing method – one that was decidedly unsuccessful – was a guerilla marketing campaign. Today, we might call it a grass-roots campaign, or even an influencer campaign. The idea was that consumers would post online about how much they loved Pepsi Blue in hopes that word would spread. That would be well and good, except that the guerilla campaign was faked. Pepsi employees were posing as regular people who were fans of Pepsi Blue, and the internet world figured it out very quickly. There’s not much less cool than someone trying to be cool. Pepsi Blue became a bit of an internet joke, and not in a good way.

All that hype, and the millions upon millions of dollars spent, didn’t do enough to make Pepsi Blue a success. It was discontinued in 2004 in the U.S. and Canada, and, though it popped up again just over a decade later, it failed to make its name in the soda industry.

Though Pepsi Blue was not a resounding success, PepsiCo has been chugging along just fine. The company, formed in 1965 when the Pepsi-Cola Company merged with Frito-Lay, has grown to include several hundred brands and operations around the world with products distributed in more than 200 countries. All in all, PepsiCo boasts net revenues over $100 billion. No wonder they can invest so much in experimenting with a soda like Pepsi Blue.

Quite a few of Pepsi’s brands rack up significant sales that contribute to that corporate bottom line. Brands that bring in more than $1 billion include Pepsi, Diet Pepsi, Mountain Dew, Lay’s, Gatorade, Starbucks ready-to-drink varieties, Tostitos and Fritos.

Pepsi and Coca-Cola have been in a war for customers for years. Many of us distinguish ourselves by whether we are Coke or Pepsi people. That competition was there from the beginning, but it really began to escalate in the 1970s and 1980s and was known as the Cola Wars, long before Pepsi Blue was created.

The two rivals took different approaches to their marketing. Coca-Cola traded on nostalgia and family-friendly feelings. They also tend toward using cute or beloved characters, like their polar bear mascot and the beloved Santa Claus.

Pepsi, on the other hand, tends to focus on strategic partnerships with sports teams and events, like they tried with Pepsi Blue. They also capitalize on their signature colors of red, white and blue, evoking American patriotism.

Pepsi had a homerun when it introduced its Pepsi Challenge. This campaign featured ordinary people being asked to blind-taste two drinks and pick their favorite. It should be no surprise that many people preferred Pepsi, given that the campaign was run by Pepsi. In later scientific studies, most people didn’t detect a big difference between the two, let alone a preference.

Pepsi Blue isn’t the only unexpected cola flavor in Pepsi’s history. In the early 1990’s, Pepsi released Crystal Pepsi, a clear, caffeine-free cola that looked like water in the bottle. Crystal Pepsi has made a few returns over the years for limited runs, much like Pepsi Blue in 2021.

In 2017, Pepsi decided to get a little spicy with “Fire,” a limited-edition drink with a cinnamon flavor. In 2020, the All-American soda company experimented with an apple pie flavor. Pepsi said the drink, released around Thanksgiving had “warm notes of cinnamon, the taste of a buttery crust, and the crispness of a fresh apple.” To get their hands on a bottle, consumers were invited to enter a contest by sending pictures of their Thanksgiving baking fails.

Pepsi got a little tricky in 2020, when it debuted “Cocoa” cola (sound a bit like the competition?) While the name was similar to Coca-Cola’s, the flavor was definitely in a league of its own. The drink had a chocolate and marshmallow flavor. 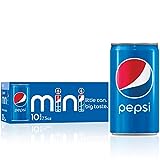 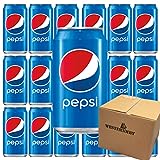 How long did it take to develop the Pepsi Blue flavor?

Was the blue dye used in Pepsi Blue banned?

Pepsi Blue was tinted with a coloring agent that was banned in numerous countries at the time because of a link to cancer in animals. It was not banned in the U.S. at the time.

How many cases of Pepsi Blue were sold in 2002, its first year?

How many cases of Pepsi Blue were sold in 2003, its second year?

Who developed the soft drink Pepsi?

A pharmacist named Caleb Bradham from Duplin County, North Carolina, developed what he called “Pepsi-Cola” in 1898. He registered a patent for his recipe in 1903.

Will Pepsi Blue change the color of your tongue?

Yes! If you drink enough of the blue-tinted beverage, your tongue will turn blue.

Why did Pepsi create Pepsi Blue?

The general thought is that there were two driving forces for the development of Pepsi Blue. One was the tremendous success of Mountain Dew Code Red. That drink was a big hit for Pepsi. The other impetuous for creating Pepsi Blue came from Pepsi’s chief competitor: Coca-Cola. Coca-Cola was working on a couple of new products, including Vanilla Coke. Pepsi Blue hit the market one day before Vanilla Coke’s debut. Coincidence? Doubtful.

What other brands did Pepsi own?

Pepsi strayed from its main focus on snacks and drinks for several years, but eventually went back to its core business. Some famous brands once owned by Pepsi include Pizza Hut, Taco Bell, California Pizza Kitchen, Stolichnaya vodka, Wilson Sporting Goods and North American Van Lines.

Where is the headquarters for Pepsi?

Former Pepsi Chief Financial Officer and President Indra Nooyi was once named No.1 on Fortune’s list of the “50 Most Powerful Women.”

Pepsi, along with other drink companies, has changed formulas for its products to reduce sugar, calories and salt to make them healthier for children and adults to consume. This presumably includes the Pepsi Blue version released in 2021, though some taste-testers didn’t note a big difference between the new version and the original.