If you have enjoyed these little candy treats before, you know that they are sweet and tart at the same time and thoroughly enjoyable. There are few candies that offer this blend of tart and sweet taste and certainly none that are made with such fun shapes.

Runts are made with a hard shell on the outside and the center is compressed dextrose. This center material is a lot like the consistency of SweeTarts. If you like these candies, the Runts will be another of your favorites. Today they are less chewy than they were in the original days that they were produced but the flavor is even more tart and special than what the original candies offered.

Runts are shaped like the fruits that they mimic. The current candy offers banana, orange, blue raspberry, watermelon, cherry, and strawberry flavors in each box. The fruits are shiny and vibrantly colored and enjoyable to snack on by the handfuls. The original boxes did not have all of these flavors in them.

In 2017 a new version of the candies was offered. This version is the current one and each box has banana, orange, strawberry, green apple, and grape in it. The 2007 flavors were all discontinued and reworked to make the newest version. The tartness was increased slightly and the overall fruit flavor was improved as well.

The candies were often sold in vending machines at the grocery store. These were the classic glass containers with the crank that poured out a small handful of the candies at a time. The cost for this amount of candy varied from place to place and increased over time, but was never much more than $.25 or $.50. Boxes of the candies were always more popular and these were a great choice for movies or road trips.

This candy is a bit too hard to chew readily and needs to be enjoyed with some patience. You might actually hurt your teeth trying to crunch these candies if you have the hard version in your hands. Most people prefer to enjoy them by sucking on them anyhow.

This is a great candy choice if you love sweet and tart candies and do not want to buy a large lozenge-shaped candy for your enjoyment. If SweeTarts are a bit too big for your eating enjoyment, these candies are a great choice that is much easier to negotiate. 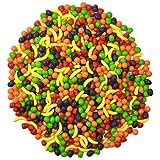 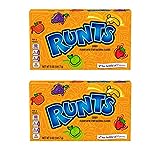 You can also buy Runts at Old Time Candy by clicking the image below.

The strange collision between Nestle and Willy Wonka began when the first Willy Wonka movie was made. Quaker Oats tried and failed to create an entire line of Willy Wonka-themed candy bars and other treats to sell at the same time as the movie was released. Their candy bar formulation failed them and they ultimately sold the products to nestle. Nestle took the Willy Wonka candy name and made the most of it, creating all kinds of fun candies that would have been familiar to anyone who loved the original Charlie and the Chocolate Factory movie.

The Willy Wonka lineup of candies gave birth to Runts along with a lot of other imaginative treats and many people miss the Willy Wonka candies that Nestle made during this period of time. While Runts survived the ultimate demise of the whimsical candy line. It is the smallest reminder of what was once a whole world of imaginative candy fun that is much missed by those who were ardent fans.

Many Runts candy fans also miss the tropical version of the candies but they are not likely to return anytime soon. Those who love Runts will just need to be happy that the Runts candy variety made it through the end of the Willy Wonka candy line and are still around to be enjoyed today.

The candies are shaped like the fruits that they represent. The banana is clearly shaped like a banana, and the blue raspberry is sort of a heart-shaped round candy. The strawberry candy is a slightly more elongated heart shape and the orange is a perfect sphere. The cherry is a good approximation of a cherry’s shape but the green apple is basically the same shape as the blue raspberry.

All of the shapes are not as important as the taste and most people will not quibble with the slightly vague shapes of the candies when compared to the real fruits they are mimicking. You can certainly tell what the candies are trying to tell you about the flavors that you can expect when you pop them into your mouth. When compared to many other fruit candies that are a simple disc shape or to candies that are large lozenges with simple bright colors, these are a much more visually pleasing candy.

You will probably find that you have a favorite flavor and many people can pick and choose their favorites by feel alone. This is part of why these treats make such a good movie theater candy when compared with other mixed candies that are sold in a bag or box. Being sure that you are grabbing the candy flavor that you like the most is quite simple when you are eating Runts even when you cannot see what you are doing.

The original Runts boxes were orange and showed a square font for the name. The candies were depicted like cartoons and had silly faces on them. The cellophane wrappers were a similar color and had the same kind of cartoon fruit candies on the front. There was a small window in the wrappers that showed the candies through them so that you could tell what they looked like.

Later versions of the candies with the Willy Wonka livery were a lighter orange in color and had different lettering displaying the name of the candy. The Willy Wonka purple hat was perched on the logo as well, making it clear that Nestle had taken over. The cartoon candies were still shown like cartoons but the drawing style was a little more modern. Bags of Runts at this time were solid in color and looked more like Skittles and other fruit-flavored candy wrappers.

The boxes that Runts come in now are bright orange in color and the logo has been changed to a bright blue color. The font has changed again as well and it is slightly crooked as it crosses the front of the box. The candies are no longer cartoonish and are simply basic renderings of the fruit shapes that correspond to the flavors inside the box. The Wonka logo is of course gone since this candy line does not exist any longer. The feel of the original boxes is still clear in the design as it stands now, but the whimsy has been removed.

From the Amazon listing:

Runts are gluten-free but are not vegan candy. The red coloring that is in the candies that are pink and red in color is made from an insect. There are also animal fluids and tissues that are in the dextrose in the center of the candies.

A Wonka ad for the candies: