Lindt is a Swiss chocolate brand that has been manufacturing delicious treats for more than 150 years now. If you have ever tasted Lindt Dark Chocolate or their chocolate truffles, you will eventually remember their distinctly unique flavors. It is just impossible not to love them. Their quality and taste helped them stay on the market for this long in such an extremely competitive environment.

Lindt Chocolate’s story begins in 1845, in Switzerland. Everything started when confectioner David Sprüngli-Schwarz and his son Rudolf Sprüngli-Ammann came up with a revolutionary idea to create a chocolate with a solid shape and texture.

The appearance of solid chocolate was an invention that the people of Zurich loved. They fell in love with it and became fond of it. In 1847, the confectioner and his son decided to shift their chocolate manufacturing from a cramped bakery, which was located in the suburbs of Zurich, to a modest facility in Horgen. Horgen was a beneficial location because it was on the upper side of Zurich Lake and therefore, provided a direct water supply.

By the time of the opening, they had 10 employees, and it was quite enough to keep the production running. The production and business were successful, and therefore, they decided to open another manufacturing site. Eventually, in 1859, the second chocolate manufacturing site was opened on Zurich’s Paradeplatz.

In parallel to the development of the Sprughli-Schwarz company, Rodolphe Lindt bought two fire-damaged factories in Berne, as well as a few obsolete machines, in 1879. His father was a pharmacist and master confectioner. He had a dream to start making chocolate and started working on it.

The first variation of his chocolate was a brittle, rough-surfaced, bitter material that was laboriously squeezed into molds by hand at the time. August, Rodolphe’s brother, and a pharmacist believed that the excess liquid that was present in a chocolate paste that was crystallizing with the sugar should have been extracted during the manufacturing process. As a result of various tries, Rodolphe Lindt invented the “Conche”, the machine that was used in chocolate making, and created the world’s first melting chocolate, “Chocolat fondant.”

Rodolphe Lindt became the first chocolate maker who produced chocolate as we know it today. His products were smooth and creamy. While eating, one had a feeling that it was melting in the mouth. His chocolate was one of the most significant inventions that participated in the creation of high-quality Swiss Lindt chocolate.

Sprüngli was still a modest chocolate factory in Horgen and had two plants. They managed to be known in Zurich until soon before the end of the nineteenth century. At the end of the century, Rudolph Sprüngli-Amann laid the groundwork for the two autonomous enterprises, “Sprüngli” and “Lindt & Sprüngli”. This was the foundation of the two different companies that were agreed with his sons.

In 1892, Rudolf Sprüngli-Ammann left his confectionery business. His two sons share the Sprüngli enterprises: a chocolate factory and confectionery shops. Simultaneously, Johann Rudolf Sprüngli-Schifferli inherits Rodolphe Lindt’s modest but renowned chocolate business in Berne, which was founded in 1879. He pays 1.5 million gold francs for the firm and the brand. This bold move grants Johann Rudolph’s new firm access to not just the factory, but also to the secrets of chocolate production and the Lindt chocolate brand name.

Rodolphe Lindt and his cousins August and Walter Lindt left the firm in 1905. Shortly after that, they decided to open their own chocolate business in Berne and called it A&W Lindt. However, by that move, they violated the contract that they had established. Legal fights started between the companies, which lasted for more than 20 years and ended in 1928 with the liquidation of A&W Lindt.

The Swiss chocolate business had virtually unprecedented growth in the first two decades of the twentieth century, particularly in export markets. Lindt & Sprüngli played a significant part in this expansion, which continued until WWI. In 1915, around three-quarters of the company’s products were sent to twenty different countries.

In 1925, Lindt & Sprüngli established a subsidiary in New York. The second large branch was opened in Berlin with the manufacturing license of Lindt Chocolate in 1928. The third expansion was in England in 1932.

The company faced a lot of obstacles between 1920 and 1945. Global protectionism, as well as the depression, caused a steady decline in all international sales. As a result, it became clear that the brand needed to focus on the local market. So, they started to focus their attention on the steadily increasing Swiss market. Lindt Chocolate Cream and Lindt milk chocolate bars were designed specifically for local people. This is a significant moment in the history of chocolate, as the Lindt Chocolate name was exclusively used for traditional dark chocolate. It needs to be noted that this particular product was prepared according to Rodolphe Lindt’s original recipe until 1934.

The demand for chocolate was raised drastically after World War II ended. So, they decided to take their product abroad again and expand the market. The manufacturing licenses were given in three major countries: Italy, Germany, and France.

The Production of Lindt Chocolate

In 1998, the Lindt Master Chocolatiers became the main face of the brand itself. Their love for the job was immeasurable. The brand decided to make sure to deliver the best quality product. Therefore, every step of the production was controlled. From the selection of cocoa beans to the creation of final chocolate goods, Lindt & Sprüngli is responsible – from “bean to bar.” That’s why, in 2008, they launched the Lindt & Sprüngli Farming Program. The program was in support of sustainability and the main aim was to create a cocoa bean farm.

The Lindt Cocoa Foundation was founded in 2013. The main goal of this creation was to make the process of chocolate manufacturing more sustainable by cultivating their own cocoa. This new program was established in the countries where cocoa beans are grown, including Ecuador, Madagascar, the Dominican Republic, Ghana, etc. The company reached the main goal that it had set. In 2020, they managed to get all of their cocoa supply from their farming program. It not only made the process more sustainable but also allowed for the precise origin of raw materials to be verified.

Lindt Chocolate has some very unique products that are loved by many people all around the world. One of the first official treats manufactured by them dates back to 1949 and is called the Lindor bar.

The Lindt Chocolate bar was transformed and renewed as the chocolate truffle that was introduced later in 1967 and became one of the best-selling products of the brand. The treat has a hard shell that is made from dark chocolate and a smooth, creamy chocolate filling. The candy bar has a pretty distinctive wrapper.

The process of Lindt Chocolate manufacturing is held carefully and under strict supervision. The cocoa beans are processed in special machines that leave the perfect nibs. The nibs get roasted, and in this process, they get a unique aroma. The brand makes sure not to roast the whole bean and only does the nibs to maintain a unique flavor.

After roasting, the nibs are ground in the special mills perfectly and pressured to extract cocoa butter. After that process, the fine paste of cocoa mass is received. This dark brown and strongly flavored cocoa paste is the foundation of our favorite Lindt chocolate.

Even though the signature product of the Lindt Group is Lindt Chocolate, they have many different variations of products that are no less delicious and awe-spiring. One of the most loved sweet treats is seasonal products.

The brand has been manufacturing delicious Gold Bunny chocolate every Easter since 1952. The main ingredient in the dessert is milk chocolate. Each chocolate bunny has a small colorful ribbon around its neck. On the ribbon, there is information about the ingredients that are in the candy. For example, red ribbons represent milk chocolate, dark brown ribbons represent dark chocolate, and so on. The Lindt Chocolate Rabbits have been children’s favorite treat for generations now.

The special edition of Lindt Chocolate is also made for the Christmas season. Variations of products include reindeer, Santa, snowman figures, bears, ornaments, and bells. And yes, all of these are chocolates.

St. Valentine’s Day Lindt Chocolate comes in the shapes of bunnies. They are mostly golden in color and come as a set, where two bunnies kiss each other. Mostly, the treats are packaged in heart-shaped boxes.

Some of the most famous products manufactured by Lindt & Sprüngli are dark chocolates that contain different compositions of cocoa. Lindt Chocolates come in many different varieties, starting with the orange intense and ending with white coconut. The brand also manufactures the “Petits Desserts” line, which includes famous European desserts that come in small cubes of chocolate. Lindt & Sprüngli also makes liquor chocolates and ice creams in chocolate flavors. 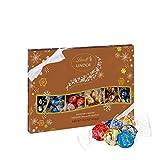 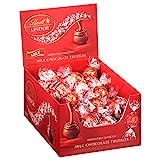 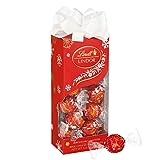 Lindt & Sprungli company has a long history and, regardless of countless obstacles along the way, they managed to be one of the finest products – Lindt Chocolate creators. The brand truly is worthy of appreciation because of the work that is put into manufacturing. However, not only that, the Lindt Chocolate brand follows its mission to create a high-quality product that is sustainable and does not harm the environment.

Where is Lindt Chocolate made?

In total, Lindt has 12 factories across the world where they make their chocolates. 10 of those are located in Europe, or more precisely: Induno Olona, Italy; Aachen, Germany; Oloron-Sainte-Marie, France; Kilchberg, Switzerland; Gloggnitz, Austria. The other 2 factories are located in the United States; Stratham and New Hampshire.

The Sprüngli companies, chocolate factory and confectionery shops are devided up among his two sons: The younger, David Robert, becomes the owner of the patisseries on Marktgasse and Paradeplatz, while the older brother, Johann Rudolf Sprüngli-Schifferli, receives the chocolate factory in Horgen from his father.