Fruit Roll Ups are a type of fruit snack that consists of a flat roll of fruit pectin and sugar and were popularized in the ’90s, and continue to have a fan-base decades later. Fruit Roll Ups com as a common sight in school cafeterias during the ’80s and ’90s, and would often feature various features and designs, such as cut out images, to make the snack more fun and engaging. 2 decades into the 21st century and they are still being enjoyed by kids, and now adults also, as the core group who the was brand was introduced to is now all grown up.

Fruit Roll Ups were first released by General Mills, makers of products such as Dunkaroos, under the Fruit Corners brand lineup. First sold in the year 1983, research and development into the product Fruit Roll Ups began in 1975. The core concept of the development of Fruit Roll Ups was to create a fun snack, that would be sweet and tasty.

The idea for the basic form and shape of Fruit Roll Ups came from fruit leather, and the product is mainly made from various types of sugars and fruit pectin. When initially released, it came in 4 flavors, those being strawberry, apple, apricot, and cherry. Over time new flavors of Fruit Roll Ups were introduced, such as Lemon Lime and Electric Blue Raspberry flavors.

Fruit Roll Ups were also made under the Uncle Tobys brand name at least as early as the year 1990, where Uncle Tobys released television commercial advertisements for its lineup of Fruit Roll-Up snacks. A similar product predating Fruit Roll Ups was created by Syrian immigrants in New York City in the early 1900s. This inspiration was an apricot-based fruit leather made from apricot paste. It was made by a man whose last name is Shalhoub, and his first name may be Louis or George, (it is unclear). This early ancestor to Fruit Roll Ups was first called Amardeen, though later was marketed as “Joray Fruit Rolls”.

Fruit Roll Ups is a tasty and fun sweet, but originally it was marketed as a potentially healthy fruit snack and were often stated to be made with real fruit. However, some of the advertising for Fruit Roll Ups was the basis of a lawsuit in 2011. The Center for Science in the Public Interest sued General Mills over Fruit Roll Ups, saying that their packaging and marketing was misleading because it presented the product as a nutritious, healthful, fruit-filled snack, despite having approximately the same nutritional profile as gummy bear candies.

The lawsuit was settled out of court with General Mills agreeing not to put pictures of strawberries on the packaging art of Strawberry Fruit Roll ups. Also, General Mills agreed to show the percent of real fruit that the product contains if claims of the product containing real fruit were made. This settlement only seems to be for the Strawberry Fruit Roll Ups and not for any other product. These changes took place in the year 2014.

Soon after they were released, The Deseret held a taste test panel with a group of local women, many of them mothers. One woman, Alice Ross, compared the Fruit Roll Ups to the taste of strawberry jam. Another woman from the taste test panel, Dawn Russell, stated that she thought they tasted sweeter than she originally anticipated and that she noted her kid’s hands got sticky eating them.

Kids received the product very well, with Fruit Roll Ups becoming a common sight in school lunch boxes. Fruit Roll-Up often gets confused with other products such as Fruit By the Foot, however, Fruit Roll Ups is its own product, with its own fan-base, and the flat wide square it provides allows plenty of opportunities for Fruit Roll Ups to differentiate itself as a snack product.

Fruit Roll Ups often contain various designs on the candy, to make it more interesting to look at and eat. Some people will stretch the Fruit Roll-Up to see the designs printed on the snack expand, reshaped, and deform. Other types of Fruit Roll Ups novelties include cut-out shapes in the candy you can play with as you eat and tattoos that will come off on your tongue as you eat. Fruit Roll Ups remains a popular snack, and not just for children, the former children this novel snack was first released to have grown up, making Fruit Roll Ups popular with many adults as well.

The Year Fruit Roll Ups Was First Made

in 2011, General Mills was sued over Fruit Roll Ups by the Center for Science in the Public Interest (CSPI). CSP sued to claim that the packaging and marketing was misleading because it presented the product as a nutritious, healthful, fruit-filled snack, despite having approximately a similar nutritional profile as gummy bear candy. General Mills asked for a dismissal of the case, stating they plaintive did now show that the products were being promoted as healthy.

The lawsuit was settled out of court with General Mills agreeing not to put pictures of strawberries on the packaging art of Strawberry Fruit Roll ups, so long as no actual strawberries were used in the product. Also, General Mills agreed that they would show the percent of real fruit that the product contains if claims of the product containing real fruit were made. This settlement only seems to be for the Strawberry flavor and not for any other product. These changes took place in the year 2014. 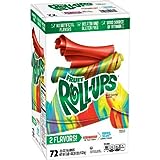 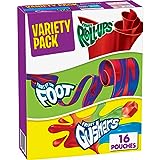 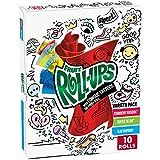 Here is a list of the different flavors of Fruit Roll Ups:

Here are the ingredients of Fruit Roll Ups.

Fruit Roll Ups are available in a variety of stores across the United States. You can find them for sale at stores such as Sam’s Club and Walmart and can check below for a more complete list of locations that may have them in stock for sale.

Here is a list of stores that sell or have sold Fruit Roll Ups:

This review is for Tropical Tie-Dye flavor

Fruit Roll Ups are fruity, sweet, and have a bit of an acidic taste to them. The fruit flavors in the Tropical Tie-Dye version are hard to describe, it tastes like some mixture of fruit, but it’s hard to distinguish. Maybe that is why they call it Tropical Tie-Dye, as it’s all mixed up in its flavors, just like it is with its colors. It is a good taste, however, stronger in flavor than how Fruit By The Foot tastes.

The Fruit Roll Up is thick to the touch, despite looking thin, and is sticky. It does not unroll very well and has no smell. It is very pleasant to look at. Overall, eating the candy is an enjoyable experience, both to your tastes buds and your eyes, but it would be nice if it was easier to unroll and spread out, and it does sometimes get stuck to its plastic wrapper.

Fruit Roll Ups Has Its Artificial Colors And Flavors Removed

In the year 2015, General Mills announced that the company will be removing artificial colors and sources from all of its fruit-flavored snacks, including Fruit Roll Ups, as well as other similar products, such as Fruit Gushers and Fruit By the Foot. The change is expected to have been completed in 2017. At the time of the announcement, it was stated by General Mills that over 20 percent of its fruit-flavored snacks brand already were free from artificial colors and flavors, including Mott’s and Fiber One.

“We believe in the products that we have today and see this as an opportunity to make them even better,” says Jacquie Klein, senior marketing manager, fruit-flavored snacks. “This is all about continuing to deliver what families want and meet the changing needs of consumers over time.”

“All of the changes will continue to allow us to deliver the products that families love today,” Jacquie says. “We’re going to make changes that delight them and will taste great.”

Here are some pictures of Fruit Roll Ups for you to enjoy!

You can watch some commercials featuring by checking below.

How are Fruit Roll Ups Made?

You just need 3 ingredients: fruit, lemon juice, and something to sweeten it. You’ll blend it all up, spread thin on a lined baking sheet, then bake at a very low temperature for a few hours, until dried.

What are Fruit Roll Ups made of?

A small spicy red-colored candies that have a cinnamon flavor. Hot Tamales were invented in the year 1950. Learn more here!

A colorful fruit-flavored candy, Skittles comes as small round candies in a bag with the slogan “Taste The Rainbow”. Read more here.

A lemon-lime flavored soda that is popular with teens and adults. Sprite is known both for its fresh, crisp, taste and branding.