Hot Tamales is a cinnamon-flavored candy introduced in the year 1950. These candies produce a burst of heat when eaten, are oblong in shape, and have come in several different varieties. They are red in color, chewy, and come as small pill-shaped candies that are included in large amounts inside their packaging. Hot Tamales are primarily made from sugar, corn syrup, modified food starch. They have become a popular candy over the years since it was created and their fans enjoy it for its spicy flavor and cinnamon taste in a simple but chewy treat.

Hot Tamales are a spicy red candy that is chewy and consist of many small oblong-shaped candies in a package, they are cinnamon flavored and were first introduced in the year 1950. They have been one of the top chewy cinnamon candies within the United States. Even though this candy got into the market a long while ago, it remains a popular candy in America as of 2019.

The 50s candy is produced by a company named Just Born, which is based in Pennsylvania in the United States. Just Born, which is a family-owned company, undertakes the manufacturing as well as the marketing of Hot Tamales. The company uses the slogan “a great candy isn’t made… it’s Just Born” for all of its candies. It has had impressive figures for its sale of candies, which led it to become the 10th largest candy company in America in 2013. Hot Tamales was particularly famous in 1999 when it was arguably the top-selling cinnamon candy. During this time the company was adding 135,000 square feet to the Just Born plant 50 miles north of Philadelphia.

Hot Tamales is popular for their spicy hot flavor. Along with the original variety, the company also sells ‘Hot Tamales Fire’ which was earlier called ‘Super Hot Hot Tamales’. The variant has a stronger flavor of cinnamon, as the name suggests, and darker color as compared to the original candy. Just Born has launched different varieties over time. Some of these variants have been discontinued though.

Just Born released ‘Hot Tamales 3 ALARM’ in the year 2011. The name comes as the packet of the candies had three different candies mixed together. These included orange (hot), pinkish (hotter), and dark red (hottest). All these three candies came inside one packet, which did do justice to the name as one could randomly get any of the three and be alarmed with the hottest one. Similar to this, ‘Hot Tamales Tropical Heat’ was released in the year 2014 which also contained three candies. The three candies in this variety were mango, lemon, and pineapple; all of these contained the classic pungent, spicy flavor of the original.

The ingredients have also been a topic of discussion for some time. One of the most common doubts was that why the list of ingredients of the candy, printed on the packaging, does not mention cinnamon. As per the FAQ section of the website of the company, they use artificial cinnamon flavoring and not natural cinnamon. Besides that, customers have also been curious about the varying flavors of the candies within the same box. The company responded by saying that such slight variations occur while the manufacturing unit is determined to deliver the same flavor and heat in every candy produced.

Just Born’s candies, have been in the market for a long time and have also maintained decent sales records. However, the company was recently sued in Stephanie Escobar v. Just Born Inc. by Stephanie Escobar. Stephanie Escobar alleged that the company was not filling the boxes of Hot Tamales and Mike and Ike sufficiently. The class suit states that the company allegedly deceives the customers in this way into believing that the boxes are filled completely since they are not see-through. The suit against the company has got a class certification as of March 27, 2019. Just Born opposed the Class certification, asserting that Escobar’s experience could not be taken as representative of many consumers’ experiences and showing survey data to counter her viewpoints.

The Year Hot Tamales Was Invented

Hot Tamales were invented by Just Born in the year 1950 in the state of Pennsylvania. This candy was introduced to consumers as small red pill/oblong shaped candies that were made from easy to obtain ingredients such as sugar and corn starch and had a spicy cinnamon-like flavor to it.

The Company That Makes Hot Tamales 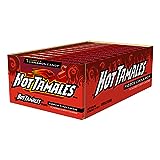 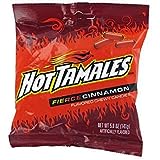 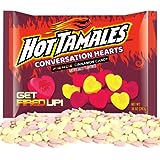 You can also buy Hot Tamales at Old Time Candy by clicking the image below.

You can buy Hot Tamales in many different ways. The candy is easily found in many stores and is widely available in the United States. You can find them being sold at stores like CVS and Walmart. You can also buy online and have them sent to you. Both have their benefits, as is it often cost-effective to buy a single box at a store, but buying online gives you more options in terms of flavors available. You can check out a list of stores that sell or have sold Hot Tamales below, or check further under that for offers to buy online and have it shipped to you.

Here is a list of stores that sell or have sold Hot Tamales candy:

Here are the ingredients of Hot Tamales.

This review is for Hot Tamales Fierce Cinnamon

Before eating Hot Tamales for this review, I take a moment to admire its packaging. The red fiery flames on the candy box provide knowledge that this product is going to be spicy. You can even smell the cinnamon spicy goodness coming from the box before even opening the packaging, triggering a mouth-watering reaction before the box is so much as opened. Actually opening the box releases pleasant fumes of cinnamon and spice. Taking the candies out of their box reveals many small, round, brightly red-colored candies. The red candy pellets are tempting to eat just looking at them. The candy is firm when touched, but is soft enough to be fairly squishy and you can easily pancake them out if you wanted to. At the first taste of the product, a granular texture is noticed, followed quickly after with a sharp and mildly spicy cinnamon taste. Biting into the little red candies produces a short-lived extra burst of cinnamon and spice. Hot Tamales are tasty, spicy, and hit with a fairly intense burst of heat that dies out after a few seconds. Short-lived as they may be in how long the flavor and intensity last, the packages contain lots of the small red candies inside, so they will keep you occupied for a long time. This is a good candy to treat oneself to when you are craving a chewy, spicy, and sweet candy. The short-lived nature of the flavor makes you want to keep consuming them; The enjoyable flavor and sensation keep you eating the candy in order to keep the intensity of the flavor going.

The packaging of hot Tamales is usually red in color, but depending on the flavor may incorporate other colors. The typical version of the product has an almost entirely red packaging style, except for the name “Hot Tamales” being written in large white font. Fire and Ice flavored Hot Tamales have 2 primary colors, red and blue, to symbolize fire and ice, hot and cold. The 3 alarm variety of the candy is primarily orange and red-colored. Regardless of the flavor or variety, the name “Hot Tamales” is always depicted in a large white-colored writing front and is centrally located on the packaging. The mascot for Hot Tamales, a red ball-like face with sunglasses, is always shown above the name of the product that is displayed on the package.

Hot Tamales are one of the most classic candies I can think of. Its taste, distinctive, flavorful, addictive, and color is vivid. I loved this candy as a kid, and I mean loved it! I could remember the taste of Hot Tamales anywhere. There is something about it that is just a classic, and to this day it remains one of the best cinnamon candies out there. That hot spiciness that they give off is something that I will never forget, and I doubt any product could properly replace them.

Why Were They So Popular

Hot Tamales have been around since 1950, and the company that makes them was ranked one of the largest candy companies in the United States and were seen as the “original” spicy candy. Many people remember them as kids and bring that nostalgia into their adulthood. Often this fondness has passed on to people’s children, just like it does with many treats. The red color of Hot Tamales is almost iconic, as is its smell. This candy can invoke recollections of people’s childhoods and that helps keep this humble but popular candy going.

Skittles are a colorful fruit-flavored candy. Skittles come as small round candies in a bag with the slogan “Taste The Rainbow”. Read more here.

Fruit Roll-Ups are a flat fruit snack that is sweet, tasty, and of a novel design. Read here for everything you could want to know about Fruit Roll-Ups!