Mike and Ike is a really popular and fun candy that comes in many varieties and has a silly and memorable name. If you love fruity candies that are chewy, this is the right candy for you! Mike and Ike have been around for a long time and this candy has not changed much since it was first sold in the 1940s.

Some classic candies are just too good to mess with, and Just Born, who makes the candy, has clearly realized that this is a recipe that does not need to be changed. If you love bite-sized candy that is sweet and fruity, this is a candy that is right up your alley. From the fun mystery of the reason for the name to the many varieties that are sold, you can enjoy all kinds of things about this fun candy!

Mike and Ike are oblong in shape and are fruity and chewy. This is a simple candy with a simple design that is still very satisfying. These are easy to grab in handfuls and snack on and they have the added benefit of being kosher candy and gluten-free. Hot Tamales, which are made by the same company, are shaped in the same way and offer the same health benefits.

This candy was first sold in 1940. The same company still sells these products and Just born inc. Has made sure that the classic design of this yummy treat has not been changed too much over the many years that is has been on the market. The name of the candy is a bit of a mystery but some people think that the candy name might have been related to a comic strip at the time called Mike and Ike (They Look Alike). This has not been confirmed by Just Born Inc, so this is largely an urban myth.

Just Born was started by Sam born, who moved to the US from Russia in 1910 He is also the inventor of Hot Tamales and Peeps. His first memorable candy project was making a machine that allowed for lollipop sticks to be inserted automatically into candies. This achievement even won him a key to the city of San Francisco!

The original flavors for Mike and Ike were Cherry, Lemon, Lime, Orange, and Strawberry. These candies have for years been best sellers in the movie theaters and the original candy flavors are the most commonly sold in this setting. These are good grab-and-go snacks and they come in a handy box so you can save the ones you have not eaten for later.

Speculation about the name of the candy has run the gamut from the aforementioned comic strip characters to a possible link to two of the men who were Munchkins in the original Wizard of OZ to speculation that the reference was to a vaudeville some about Mike and Ike. There are even people who think that the reference in the name is to Dwight D. Eisenhower whose nickname was Ike. The candy company has never made this clear but they have released candy boxes that featured the cartoonish faces of two men in vaudeville outfits which led to increased confidence that this was the source of the name.

There are many other flavors of Mike and Ike these days, but the fruity originals are still some of the most popular ones. There is something that is really delightful about the sweet and yet tart nature of this candy and they are so easy to snack on. The same can be said of Hot Tamales, which the company released in 1950.

Just Born Inc acquired a smaller candy company called Rodda Candy Company in 1953 and they started adding other flavors of Mike and Ike. These included things like a cotton candy flavor and root beer flavors. There have been some seasonable varieties that have hit the shelves over the years and there are still many different flavors of Mike and Ike that you can buy. 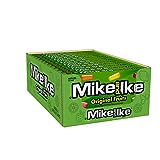 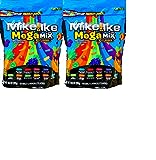 Varieties of Mike and Ike

There are actually quite a few varieties of this candy. Most people are only familiar with the original fruit flavors but there are many other flavors that you can choose from as well as some great seasonable varieties. Not all of these varieties are still on the market but you will find that the most popular styles that have been removed from shelves often make comebacks. Just Born loves a good throwback and they often bring back old flavors that were sold for a limited time.

Limited edition varieties have also been on the market at different times during the history of this candy. Sundae Sweets were made in 2015, Cotton Candy in 2015 and then 2021, and Root beer Float was issued in 2015 and then again in 2021 as well.

Ingredients in Mike and Ike

Marketing of Mike and Ike

Some of the marketing of this candy has always been fueled by the mystery of the name of the candy. The company has never explained the reason for the name and this has made the candy a source of discussion without having to put effort into advertising it. There have been recent efforts to provide the candy boxes with a makeover and to change the logo to make it look more modern. These are small changes but they have made the brand look more current overall.

The company has also stated that they are making efforts to make the candy juicier rather than chewy. This has been a recent change but it could lead to increased sales if the changes catch on and are a big success. The risk in this kind of change is that you will change the flavor profile enough that loyalists will not like it and will turn to other candies instead.

In 2012, the candy company created a campaign where Mike and Ike were breaking up over “creative differences”. The boxes that were produced of the candy during this campaign would show one or the other of the names scratched out. This was meant to be a campaign that appealed to younger people. In 2013, they got back together and healed their differences. This campaign was reported to have cost the candy company 15 million dollars in ads and production costs for the movie and other considerations that were needed to promote the candy in this way. The candy company did report increased sales the next year, so the investment was probably worth it.

There was a movie that was made about their reunion that was called The Return of Mike and Ike. Mike and Ike are currently partnering with Nerd Street Gamers to support the site and to promote the contexts that the gaming site offers. This is another effort to appeal to a younger audience that has delivered good results for them in the past.

Mike and Ike candies are one of those candy brands that have never had to make a big effort to advertise until recent years. The candy space is more crowded than ever, so advertising and working with other companies is almost mandatory to advance your brand and keep it in front of consumers. Mike and Ike have their loyalists and people who love fruity candy will always gravitate toward them. However, the company has been making bigger efforts lately to connect the candies to other activities and brands to try and keep the candy relevant.

Pictures of Mike and Ike

Mike and Ike ad about the split:

The original theme song was used early in the candy’s history. There is some great footage in here of the candies being made too: