Everyone loves a fun cereal, right? So why wouldn’t you indulge in Boo Berry!? This General Mills spinoff cereal is tasty, sweet, and not at all spooky as the name might suggest!

Let’s take a look at it!

General Mills has always been known for its fun and creative cereal options and Boo Berry is just another in a long line of success. The company has a variety of monster cereals that include things like Count Chocula, Franken Berry, Fruit Brute and Fruity Yummy Mummy.

This line in particular was introduced to the world in 1971. Some of their flavors have been discontinued through the years but Boo Berry is still in production.

Since these are known are monster cereals, they tend to be seasonal and only offered around that monster season we all refer to as Halloween. They are produced specifically from September 1st through October 31st each year so this is when you should stock up to enjoy them all year round.

Boo Berry was not one of the first flavors in the monster cereal line. The first two flavors were Count Chocula and Franke Berry then Boo Berry made its debut in 1973, just two years later. Fruit Brute followed shortly in 1974.

Boo Berry was the first-ever cereal that was blueberry flavored and while flavors like Fruit Brute and Fruity Yummy Mummy were discontinued by 1992, Boo Berry remains strong today.

When Boo Berry was initially released, it’s possible that it could be found all of the time. However, as of 2010, the other monster cereals are only available during that specific time frame in the fall and Halloween season. After Halloween, they are no longer available until the next year.

There have been some additional products created as spinoffs over the years, including Fruit Roll ups.

In 2014, DC Comic helped to create new designs for Boo Berry and the other monster cereals. The Boo Berry design from that project is credited to Jim Lee.

Boo Berry is in the running to be considered as one of the all-time greatest cereals out there.

The very first TV commercial displayed a ghost beneath a hat, sporting a blue chain. He greets Franken Berry and Count Chocula, introducing himself as Boo. After the word Boo scares them, he finished with “Boo Berry”.

In the commercial Boo Berry describes his cereal as “ghostly good blueberry-flavored cereal”.

Did you know that Boo Berry cereal has actually been seen on TV in some series? Preacher on AMC displayed a box of cereal in season two. In fact, there is even a scene on a character’s friend making fun of him for his cereal choice.

You see it several more times in the episode and additional episodes from the series. The three episodes you can find it in include Holes, Dirty Little Secret, and Angelville.

Another fun fact is that on TV, Boo Berry’s character is played by Paul Frees. This is the same voice actor that does Pillsbury Doughboy as well as Toucan Sam.

When Was Boo Berry Invented?

While the monster cereal line began in 1971, Boo Berry did not actually join the cereal lineup until 1973.

Boo Berry was the first blueberry flavored cereal to ever join the cereal industry as we know it. and may have been available all year round, we’re not really certain. However, we know that since at least 2010, Boo Berry and the other cereals in the monster cereal line have been seasonal.

Boo Berry is considered to be one of the most popular cereals ever created.

Boo Berry was introduced by General Mills. We don’t have much information about who came up with the brilliant idea.

What we do know is that General Mills began producing a monster cereal line in 1971. The first options in that line were Count Chocula and Franken Berry. More flavors were added over the years and Boo Berry was added in 1973.

Boo Berry was the first-ever blueberry cereal and it contains blueberry ghosts along with a few blueberry flavored marshmallows within the cereal. Some other flavors were also produced after Boo Berry as well. However, the only flavors that remain in steady production are Boo Berry, Franken Berry, and Count Chocula.

These are all seasonal. 2021 marks the 50th anniversary of the monster cereal line. General Mills has made it a great anniversary by creating a monster mash cereal. Monster Mash mashes together all of the flavors from the line.

In celebration, they also brought back the discontinued flavors but they are seemingly hard to find in stock.

Boo Berry, combined with all of the other cereals in the monster cereal lineup, is owned by General Mills Company.

This cereal and the completed line of breakfast cereals have always been owned by General Mills since 1971 (and 1973 for Boo Berry). It has never changed hands or changed ownership through the years.

It’s almost impossible to find foods that don’t change ownership but these cereal lines have consistently been with General Mills, which is pretty cool.

How Did Boo Berry Get its Name?

Boo Berry almost speaks for itself. This cereal was specifically created for a line of monster cereals from General Mills.

The commercials for these cereals used the name of the cereal for the name of the associated character which was a ghost named Boo Berry. The same is true of cereals like Count Chocula and Franken Berry as well. 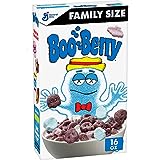 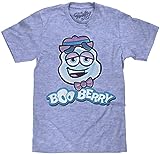 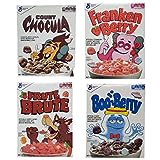 Boo Berry cereal has never changed or added flavors. It is one flavor in a line of monster cereals. Here are the flavors that have been or are currently included in that lineup.

Monster Mash is a limited edition option that was created to celebrate the 50th anniversary of the line. It basically contains parts of all of the cereals from the line. It’s truly a monster mash.

Both Fruit Brute and Fruity Yummy Mummy were officially discontinued in 1982 and 1992, respectively. However, they were re-released alongside Monster Mash for the 50th anniversary of the cereal line.

While Boo Berry has no other flavors or products, Fruit Roll-Ups did produce a Boo Berry fruit rollup for a short time in 2010. These are no longer available.

Boo Berry and all of the other cereals in this line from General Mills are only sold actively in stores from September 1st through October 31st each year. After Halloween, they are removed until the next year.

During that time, you should be able to find them both online and in stores. There are plenty of resources for finding them. Resources say that Target is the best place to find them, as well as the other flavors from the line.