This candy with an unusual name is one of the classic candies from the early 1900s that are still sold today. If you love nuts and nougat, as well as chocolate, this is the right candy for you! Everyone who loves nut clusters and sweet and fluffy filling will enjoy this classic treat that offers the best of a variety of different candy styles.

There are a few different versions of this candy product so that you can find the right variety for your preferences. The Goo Goo Cluster is a staple of Nashville, Tennessee, but those who love this kind of treat can easily try it with the help of online shopping these days. If you have never enjoyed this kind of candy, you need to order the Goo Goo Cluster and give it a try today!

The Goo Goo Cluster is an American candy that is sold as a candy bar despite its round shape. The candy heralds from Nashville, Tennessee. It was first made and sold by the Howell Campbell and the Standard Candy Company, which are two of the largest candy companies in this region in 1912. This candy is made with peanuts, and the center of the candy is marshmallow and caramel. The candy is shaped like a disc, but it is not perfectly round due to the nuts and the nature of the candy that makes each disc.

The first Goo Goo Cluster candy was made in a copper kettle at the Standard Candy Company in downtown Nashville. This is the humble beginnings of one of the most popular candy bars in the United States. The recipe was the result of work done by Mr. Howell Campbell and Mr. Porter Moore, who was the original plant supervisor in 1912. The original products that were made were sold without wrappers, under glass at local candy stores. They were such a hit that the marketing program shifted into high gear, and local sales were fostered with unique wrappers that helped preserve the candy.

The original candies were sold individually wrapped in glass jars. This was how the product was sold in the area local to the company itself. Later versions of the candy were not sold in this way due to the cost of this packaging. When the 1920s rolled around, and the product was gaining in popularity, the company started to sell the candies in individual wrappers without the glass jar. Tins were used to contain the candies for a certain period of time as well.

The same recipe that was used in 1912 is still in use today in the original candy bar variety. This tells you just how popular the candy is and how well it has held up over the years since it was first sold. Candy bars have changed a lot since they were first created and offered for sale, but the fact remains that peanuts, caramel, and nougat all still pair really well with chocolate. Since these candy bars have never stopped selling well, there was no need to change the recipe. If you are enjoying a Goo Goo Cluster candy bar, you will be enjoying the same treat that people loved in the early 1900s.

This candy bar is considered the first product that was made with a combination of ingredients. The original candy bars were usually just chocolate due to the complexity of mixing elements and also the troubles with preserving these products in the heat of the summer. Candies that were made with chocolate were hard to sell other than in the colder parts of the year, and many candy companies did not waste the effort to make complex candy bars that could not be sold for much of the year.

The fact that this candy bar was made with various ingredients suggests that its makers were forward-thinking for candy makers in the early 1900s. The candy was likely sold with this name to mimic the sound that babies make. One of the early slogans was, “So good, they’ll ask for it from birth.” Other people think that the candies were named Goo Goo Clusters due to being sold at the Grand Ole Opry.

By 1925, the candy was sold at the Grand Ole Opry for the first time. Whether or not the name of the candy bar was a bit of a play on the name of the famous music venue, which went by GOO when listed in shorthand, is a matter of some debate even today. Movie theaters also sold this candy during this period, or you might see the candy advertised as “a nourishing lunch for a nickel”.

This was the era when candy was sold as a meal replacement, part of the result of the generalized starvation and hunger that had taken place during the great depression. No one was concerned about the contents of this “meal”, and the fact that it was affordable and would stave off hunger was good enough at the time.

Candy is not allowed to be sold as a meal replacement these days, but it is easy to understand how a candy company could state that the candy that they were selling might replace a meal during the 1920s and 1930s. Candy bars like The Full Chicken Dinner were being sold during this period as well, so you can see how common this kind of advertising was in the post-depression era. Goo Goo Clusters at least did include peanuts which are a source of protein.

The inclusion of peanuts makes this candy bar at least a reasonable option to gain some nutritional benefit when it is needed. While not a perfect solution, this is better than what could be said about the solid chocolate candy bars that were more common during this period and which offered very limited nutritional benefits to those who were consuming them to replace meals.

This candy bar is legendary in Nashville, and there are Goo Goo Company stores as well as a Goo Goo Shop and Dessert Bar in the SoBro downtown area. These locations sell Nashville-themed gifts as well, showing just how connected the Goo Goo Cluster and Nashville are in the minds of locals. Visitors to the local shops can learn the history of the candy as well as its local history in Nashville. This is one of the most unique things to do in Nashville, and you will want to make sure to check this out if you are ever in Nashville.

While there might be other versions of this candy made in the future, it is not likely. The original candy product is the most popular recipe, and since there is no reason to change something that is selling so well, it is not likely that the candy will need any new versions to keep it relevant. 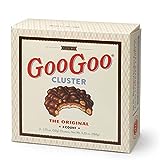 You can also buy Goo Goo Clusters at Old Time Candy by clicking the image below.

The nutritional information for this candy is as follows:

While gluten-free, this product is not a good fit for those with allergies to peanuts, eggs, milk, or soy. Pecans are also a listed potential allergen and almonds. This is not the most allergy-friendly candy bar if you do not count the gluten-free status of the recipe.

This candy is one of the classic candies that is not sold through the use of advertising in the form of videos. Word of mouth and fame of the candy in its local hometown is more than enough to help it sell well all year round. Like many classic candies, the familiarity of this brand is more than enough to keep it relevant, and there is no real pressure to dream up advertising plans or any kind of highly visible marketing to make this candy popular.

This is one of the beautiful things about these kinds of candies. You will find that most people will tell their kids or their grandkids about the candies that they loved when they were young, which is more than enough to keep this product relevant and selling well every year. Classic candies almost never require a bunch of new ads every year or new versions of themselves to sell effectively, which means that you will enjoy the original product sold in much the same way as the original candy bar was sold.

How the candy is made:

A version of the original candy packaging: