Otter Pops was created in 1970 by the company National Pax in 1970. They made this company shortly after Jel Sert started Flavor-ice in order to compete in this new and hot market. Part of how they dominated the market was not just creating identical packaging and flavors. Still, they actually started and named mascots for each flavor. This made this brand immensely popular.

Otter Pops is still sold today; however, in 1996, Jel Sert (owner of Flavor-ice) acquired the right to sell this brand as well. In the 2000s, the recipe was altered to add more fruit juice to these pops.

Currently, you can get Otter Pops in four different sizes (1-ounce, 1.5 ounces, 2-ounce, and 5.5 ounces). There have been a number of flavors throughout the years, with the majority of them still in production. Each flavor also has an associated mascot. Here is the list of colors, flavors, and mascots:

Everything about Otter Pops is about branding and marketing, which is pretty impressive as this started in the 1970s. Even the name is meant to attract younger children with a fun and whimsical name. All the mascots are a lot of fun as well!

For instance, the mascots have cute outfits, and many of them can also have accessories, glasses, sashes, or hairbows. Some of the mascots have facial hair. As time went by and new mascots and flavors were added, and the company used these new mascots to highlight favorite themes or add new and modern ideas.

For instance, astronauts are always popular. Cosmic Coconut is white and wears earrings, a flower, and a full spacesuit with boots. A more modern take on the mascots can be seen in Major Mango. Major Mango is a mango-flavored ice pop that is styled as a gamer chick. She is an e-sports champion with her very own gaming channel.

Besides themed outfits, most of the mascots also have some sort of iconic item associated with them. Some examples include Sir Issac Lime having a telescope, Poncho Punch has a guitar, Cosmic Coconut has a space helmet and a plag, Anita Fruit Punch has a volleyball, and DJ Tropicaool has headphones.

Freezie Pops, such as Otter Pops, is an everyday treat in America that most Americans would be surprised to know that they are not available outside our borders. This can be a little surprising because these pops seem like they are everywhere. Jel Sert, the brand that makes both Otter Pops and Flavor-ice, have mentioned that they are planning to expand their company internationally. However, that is not a top priority.

So, if you do find a freezie pop outside of America, it will not be one of the two top brands that you know and trust.

The Otter Pops Protest of 1996

All good brands have at least one great story, right? This is especially true for Otter Pops. In 1996, Otter Pops had planned to replace one of their less popular flavors with a new one. After spending $100,000 on market research and development, Otter Pops announced that Sir Issac Lime (the lime-flavored pop) had died, but he would now be replaced with Scarlett O’CherryO’Cherry.

At the time, the company felt that this was a great marketing move, and their sales would only rise due to this decision. After all, they had spent the money on market research, and lime was their least favorite flavor. Also, it is essential to note that this was way back in 1996 before the internet was the way we learned of news (and most everything else) and way before the rise of social media.

However, this change did not go as planned.

In Costa Meca, California, a 9-year-old named Kevin Kee was not happy about this change whatsoever. But again, this is before a social media campaign, and overwhelming public pressure could change, halt or alter the company’s decisions, so how would this 9-year-old save Issac?

Thankfully, his mother, Amy Kee Cordova, remembered an episode of the popular family show, The Brady Bunch, where they lobbied their town’s local government to cancel plans to turn a beloved park into a parking lot. She used that successful, albeit fictional, lobbying from children to help her son lobby Otter Pops owners to stop this change.

Kevin, with the help of a few younger cousins, started a campaign to get other children at his elementary school to sign a petition called “Save Issac Lime.” This petition ended up having 130 signatures on it. The plan was to present it to the CEO at the headquarters in person in Riverside, California. Besides the petition, Kevin and his cousins also created campaign posters saying things like “Scarlett O’CherryO’Cherry is Unnecessary.”

Little Kevin was not the only one who heard about the death of Sir Issac Lime; other people were not happy at all. The CEO at that time, Ron Cedillos, had received dozens of angry letters from customers questioning this decision. One letter stood out. It was from a professor at Stanford, a huge Otter Pops fan. He accused the CEO and the company of committing “ottercide.”

By the time Kevin and his mother arrived at the company, the CEO had already received all these letters. Still, he tried to explain to the family how much money was spent making this decision and why it could not be changed.

No one knows what Kevin said in that closed-door meeting, but it must have really struck a chord with the CEO because not only was the change of flavor and mascot canceled, Kevin Kee left there with a 3-foot-tall inflatable Sir Issac Lime toy and 1,000 free Otter Pops.

Sir Issac Lime not only lived to fight another day, but almost three decades have passed, and he is still one of the primary flavors/mascots of Otter Pops.

Thanks to the Geena Davis Institute, the mascots for Otter Pops are now gender-balanced. This change was to show more female representation in brand mascots. Otter Pops wanted to be a leader in this arena, so they added new mascots to make sure they had 5 male and 5 female mascots representing their brand.

This is a change that shows how modern times can change how a company expresses itself in advertising. Small, simple changes can make a big difference to the consumers. 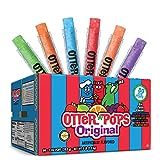 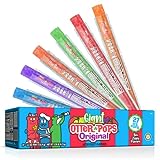 When buying Otter Pops, you can choose between artificially flavored pops, which come in the bright and traditional colors you are used to, or you can get Otter Pops with 100% fruit juice. The 100% fruit juice pops do not use any artificial colors or flavors. The main ingredient in these pops is apple juice, so these pops are a brown color.

However, the flavors are the same if you get the 100% fruit juice pops. They are just a healthier alternative than using artificial flavors and colors. Although these may not be as pretty and fun as the originals, this is a win for mothers everywhere. Even though the colors are not present in these pops, the mascots that originally made Otter Pops famous are still represented.

The ingredients of the popsicles include apple juice, water, and sugar. To ensure they are as healthy as possible, they also have no high fructose corn syrup. However, if you do not want to partake in brown Otter Pops, don’t worry; they are still available in all the colors you and your family love!

Otter Pops did add extra coloring to the packaging to make up for the less colorful pops. The original packaging showed the mascots drawn in white on the sleeves, but the mascots on the 100% Otter Pops are full color.

Studies on the effects are artificial colors and flavors have had mixed results over the years. This is why Otter Pops are offered both with and without these artificial elements. This way, their customers, the consumers, have control over what they prefer. Either way, they will receive a box of tasty pops with all the flavors and super cute mascots that they remember and love.

What are Otter Pops?

Otter Pops is a popular version of “freezie pops,” a summertime treat. This is one of the oldest types of this product, coming out in 1970.

How long do Otter Pops take to freeze?