Big League chew is actually a bubble gum brand. Many people would not think so who have not enjoyed this gum before in the past. Big League Chew is a little like the candy cigarettes that were created during a time where it was not considered an issue to make candy that mimicked tobacco products.

Today, Big League Chew still exists, and the style of the gum as well as the representation of it has not changed much. There are no more references to chew these days and since most baseball players no longer use tobacco products, the connection would not even make sense if it was made now. Big League Chew is one of the most unique bubble gum products that is sold in the US today. If you are ready to learn more about the history of this bubble gum product, you need to read on!

This gum was created by the Portland Maverick’s, Rob Nelson and Todd Field. Todd was the bat boy for the Mavericks and Nelson was their left-handed pitcher. They pair made the gum and then pitched it to the then owner of the Chicago Cubs, the Wrigley Company. They also included long-term friend and fellow All-Star Jim Bouton from the New York Yankees in their pitch.

Their idea was that this bubble gum would sell well because it was made to mimic the tobacco chewing habit that many ballplayers in the 70’s were known for. This was as baseball as a bat and glove at the time, and the idea was that kids would be able to enjoy adult-style experiences by having their parents buy them bags of this bubble gum “chew”.

The gum was actually modeled on something that Field had been doing to look cool in front of his fellow teammates. He admitted to Nelson that he had been shredding up licorice to look like chew and then sucking on it when he was working around the team. Nelson said that this sparked the idea for the gum and a product was born. Nelson says that he actually had the idea in 1977 and that it “stuck with him”.

Nelson insisted that he never chewed since he didn’t like feeling sick but he did think about what Field had been doing to try and hide his youth. He said that he told Field that he should make some bubble gum or something that would make it look like he was chewing too. When asked what he would call it, he said, “I don’t know, uh, Big League Chew?”

Nelson bought a make-your-own bubblegum kit in 1979 and went to the store for some maple and root beer flavoring. He made the first batch of Big League Chew in Field’s mother’s kitchen. He says that he shredded the gum with a pizza wheel.

Jim was sold on the idea and put up $10,000 for the product to be made into a prototype. Big League Chew was added to shelves in supermarkets and other locations in May of 1980. It was pink in color, rather than brown like the food-colored batch that Nelson made in his first attempt. To date, more than 800 million pouches of the gum have been sold.

Jim went door-to-door with the gum at first, trying to find a buyer for the rights to manufacture the product. Eventually, a small division of Wrigley in Illinois took an interest in the product. They already made Bubble Tape, so this was right up their alley. Jim states that they indicated they felt that this would be a novelty item for them but then the gum shocked them by selling $18 million in the first year. By 1981, the gum was sold to the Tribune Company for $20.5 million.

The original packaging has been reworked some today, but the image is still of Nelson himself, in his 20’s, holding a baseball bat with a fierce grin on his face. The shredded gum continues to be popular with people of all ages. Today the gum is made at the Ford Gum & Machine Company in New York after they took over the rights from Wrigley in 2010.

The slogan for the gum has never changed. Big League Chew is still sold with the slogan, “You’re in the big leagues when you’re into Big League Chew”. Another alternate slogan is, “The hall of Fame Bubble Gum”. This second slogan is delivered on packs that show the official endorsement from the Baseball Hall of Fame.

Older packs of the product said things like, “man size wads” and “equals 26 sticks” and the packages touted that they were “stay-fresh” pouches. The idea was that the gum could be stored in a pocket just like chew and returned to when needed to freshen up the flavor of the gum that was already in your mouth.

Nelson still states that the communal nature of the product is part of what makes it so fun for people and what has kept the gum on shelves all these years later. The association with tobacco is over and gone, but it is very easy to open your pack of Big League Chew and share a pinch or two with your friends while you watch a movie or hang out at a baseball game.

Nelson says that he is happy being anonymous and comfortable and that he does not think it would be smart to make the brand any bigger or to try and add new flavors. He says that he thinks that the simple nature of this product is what has given it such long-term popularity and that he won’t change a good thing.

The product is currently sold in a few flavors:

Although the gum was originally made to model chewing tobacco, the company and Nelson firmly state that the gum was never intended to be a gateway product to real chew. The company has insisted that there is no proven connection between imitating the use of tobacco products and growing up to use them.

Nelson points to himself as a great example of this, stating that he was surrounded by people who chewed for years and that he never wanted to start chewing. He of course enjoys his own products and has never been inclined to go start chewing with tobacco just because of Big League Chew. Nelson maintains that the amount of dead time during baseball games can easily be filled with time spent chewing Big League Chew. This is the assertion that the company will make anytime they are asked about gateway drugs and Big League Chew.

Though involved in the many products that were called out by the War on Drugs as possible gateway substances, Big League Chew has never been clearly linked with any kind of psychological effect that would lead to risky behavior. The bond between the gum and chewing tobacco is so outdated at this point that most young people might not even know that this was the original reason that the gum was created. More recent work on gateway substances and the likelihood that people will engage in high-risk behavior due to products like Big League Chew have cleared the gum for continued production without censure.

Major League Baseball has long since banned the use of tobacco products from the minor and major league systems and the original connection between this product and chewing tobacco continues to wane. Candy cigarettes have not survived the controversy over their bond with high-risk behavior, but Big League Chew has managed to survive the problematic early days of its marketing and production intention. 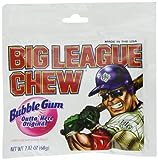 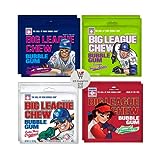 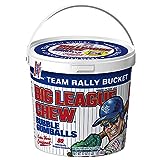 You can also buy Big League Chew at Old Time Candy by clicking the image below.

From the HEB entry:

The colors might vary for the varieties that are not the original variant.

An interview with Nelson: