While this seems like a problematic kind of candy to promote, for generations smoking was not known to be bad for you. Kids wanted to look like their parents and other grown-ups that they looked up to. Part of the experience of being a grown-up would have been smoking to kids at the time that candy cigarettes were the most popular.

Candy cigarettes are still made today, but they are not sold in many places due to the controversial nature of what they stand for. There have been studies that have shown that exposure at a young age to even the fake version of cigarettes can lead to cigarette use later. Cigarettes are well-known these days to be bad for your health, and candy cigarettes have been identified as a common means by which young people become interested in smoking.

Candy cigarettes are still made today but they are not sold in grocery stores and movie theaters. You will often have to order these products online if you want to enjoy them. The social pressures against smoking have painted candy cigarettes with the same negative association and there are studies that have indicated that these candies can increase the chances that you will start smoking.

These candies were first sold in the 19th century. They were made out of bubblegum or sugar or chocolate at this time. They were usually wrapped to look just like the real thing and were made to resemble cigarettes as closely as possible. Some of the early versions of this candy had powdered sugar inside them that allowed you to produce sugar clouds in the place of smoke.

The presence of candy cigarettes on the market made more sense when it was not well-known that cigarettes were bad for your health. At this time, children wanted to be adult-like their parents and many companies actually used slogans like, “Just Like Dad” to help sell their products. There were many different slogans like this all over the market for candy cigarettes at this time. Kids wanted to seem sophisticated and a big part of seeming like an adult was smoking.

The other problem with this kind of candy is that it is marketed specifically to children. This is considered to be problematic on many levels since kids should not be encouraged to practice any kind of risky behavior that might impact their health. Cigarettes are incredibly addictive for some people as well which is why encouraging kids alone to basically practice smoking with candy cigarettes is considered to be very problematic.

There are different forms of this candy today and it might be sold in stick, bubble gum, or simple candy form. These companies have tried to divorce their products from real cigarettes, but the link between the real thin and the candy version is impossible to ignore. Tobacco companies have even allowed candy cigarette companies to use their branding and labels on their candy products over the years. This has led to infringement issues with copyright and over the years but it does not help candy cigarettes when they assert that their products are not linked to real cigarettes in any way.

There have been studies done that show that kids who have eaten these candy products were as much as 2x more likely to smoke than kids who had not enjoyed this candy treat. Current and former smokers often state that they ate candy cigarettes when they were kids. While the candy itself did not impart any addictive ingredients to those who consumed it and there was no direct link with cigarette buying, the social implication and positive association of these candies and smoking are easy to identify.

Candy companies intended for kids to be excited about practicing smoking with these products and there is no way that this was not their intention for making these candies even after it was discovered that cigarettes could be disastrous to your health.

While it is an urban myth that candy cigarettes were banned in the 2010 Smoking and Prevention Control Act, there were still new rules that were put in place to ban flavoring in cigarettes other than menthol. This does not regulate the candy industry but there has been a lot of social pressure to keep kids away from candy cigarettes.

Most of the candy cigarettes that are made in the world are manufactured in New Jersey at World Confections Inc. This product, which offers similar problems to the continuing sale of Big League Chew Gum which is made to mimic tobacco chew products, continues to be sold in key markets in the US and other places in the world. There is some sign that this kind of candy product is going to become increasingly problematic in most markets and it might eventually be a candy type that will not be made any longer.

As mentioned before, during the heyday of the cigarette marketing reality, there were candy cigarettes that were sold with the actual logos and box images of real cigarettes on them. This would never be allowed today due to social pressures as well as the copyright infringement issues that this would lead to. Today’s food and candy market do not allow links between alcohol and smoking with regular candies that can be consumed by people of all ages. However, when candy cigarettes were first sold, it would have been considered the height of really exciting adult behavior to be able to pretend to smoke along with the grown-ups around you.

The different brands of candy cigarettes also offered slogans like, “Just like dad” and other kinds of slogans that might lead to kids knowing that being cool like an adult was linked with smoking. Candy cigarettes cannot lean on this kind of marketing these days and they are forced to try and use cartoonish logos and images that do not directly link them to cigarettes.

Most of these candies are actually called “sticks” today rather than being labeled as cigarettes. These items are not sold in grocery stores anymore either and most of the ordering and marketing efforts for these products are done online. This makes the process of picking up cigarettes that are made of candy almost like a secretive black market buying experience. This is one of the few candies on the market that is linked so closely with social change and with a health concern that actually has nothing to do with the candies themselves.

No matter how much candy cigarette companies want to market their products as toy cigarettes, they are not going to meet with much success with these marketing strategies in today’s health-conscious reality. The world has moved on from this kind of candy being marketed with a deep bond to regular cigarettes. The future of this candy is going to be in question unless these candy makers can rebrand their products. 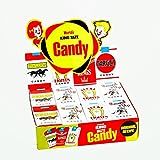 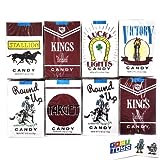 What Are Candy Cigarettes Made Of?

While the ingredients of the actual candies are not dangerous in any way, the social implications and the connection with real cigarettes have been proven to increase the risk of cigarette addiction. You can see that the ingredients are not really the problem in this situation and that the true issue is that the social connotations of this product are now problematic. The original makers of this candy would not have been able to imagine a reality where their candy creation was not truly unique and fun but the revelation that cigarettes are unhealthy has also tarred and feathered candy cigarettes.

A much older commercial:

A great review where you can see many of these candies and their original boxes: