These delightfully crunchy and salty crackers are some of the most popular and well-known crackers on the market today. There is something delightfully wholesome about Triscuit crackers and you will probably realize that you can’t think of any other kind of cracker that is like these unique little snacks.

Crackers are plentiful on the market, but there is something really delightful about the texture and taste of this snack item. These filling and crunchy treats are deceptively simple and you can pair them with almost anything. You can use these crackers for a daily snack or for the base of an hors d’oeuvres item that you are offering at a party.

This is a really popular and familiar cracker and it got its start way longer ago than you might think. These crackers have been around since 1900 and they were patented in 1902. The company got its start in Niagara Falls and the product was designed and created by Henry Perky.

Henry Perky was the inventor of Shredded Wheat and he used this knowledge to design Triscuit. Triscuit was made in the same vein as the already popular shredded wheat cereal. At this time, food products of all kinds needed to be filling and complete meals as much as possible. The scarcity of food and later the food problems related to the Great Depression drove this trend in food products of all kinds. Even candies were sold as complete meals in the 20s and 30s.

The product was first thought of in 1898, but it took five years to make a product that would actually work and that tasted good. This was a product that Henry knew that we wanted to patent as soon as he started working on making it. The way that it was made was unique at the time, from the cooking process to the way that it departed from slicing off a biscuit shape from a larger biscuit for eating.

Having pre-made and sliced crackers in a box was still a really new idea at this time. These crackers were revolutionary for their day and made food more portable. This was probably a nod to the need for portable foods during the industrial era when people no longer went home to eat their food before heading back into the fields. The rise of the boxed lunch created these kinds of foods as much as food scarcity influenced them.

Crackers were an offshoot of both practicality and a lack of food in the US. Triscuits are very delicious and snackable but they are also a sign of the kinds of food realities that people were faced with in the 20s and 30s. Triscuits are a sign of how far food items that are premade have come and when you eat a Triscuit, you will see just how much snack foods have changed since the Great Depression.

The original crackers were 2 and ¼ inch x 4-inch crackers. This size of cracker was used for 21 years. In 1935, the product was scaled down to 2 and ¼ inches by 4 inches. This was done to improve the taste of the product and in today’s market, this is a more normal size for a cracker. The product was also later modified to introduce the flavored varieties and changes to the crunchiness of the product.

The company that first made this treat was called The Shredded Wheat Company. This was the production company that combined the idea that electricity and biscuits went together. This was the early industrial era, and machining of anything at all, including food, was still strange and unfamiliar to many people. The original logo was, “Baked by Electricity” which would seem silly now but was very relevant then.

The reason for the name of this popular cracker is actually linked to the process by which they were made. Triscuits were actually named for the electricity that made them and was not intended to be a play on the word ‘biscuit’. The two things were both beneficial to marketing the product. When it was a new product, electricity was likely more exciting than crackers, so this was a key element in marketing this product. The current marketing plan benefits from this play on words quite readily, even though it appears to have been an accident overall.

In 1928, Nabisco purchased the brand. By 1935, the slightly simple taste profile was improved by adding some oil and salt to the recipe. The additional flavor choices that are connected with the brand today were not introduced until 1984. America spent a lot of years recovering first from the Great Depression and then later from World War II. Basic and practical foods were more than enough for most people for years. The need for exciting new flavors was not requested or even thought of until much later in the life of the brand.

Triscuits have always been made of wheat. This was one of the only available products to make crackers in the early 1900s, but it is unusual to see simple wheat crackers on the market in more modern times. These crackers have not changed much in design or recipe since the 1900s, which cannot be said for many different crackers that are on the market still today.

Triscuits occupy a location in their market space just like Kleenex in their space. Triscuits are synonymous with the idea of a crunchy wheat biscuit or cracker and many products are called Triscuits are a point of reference. Even if something is not a Triscuit, this is a common word for this kind of product. This is a great place for any product to find itself in, and Triscuits are completely associated with crunchy wheat crackers these days. 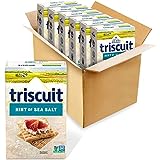 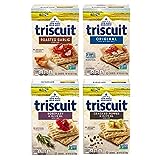 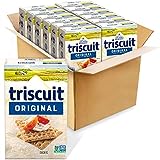 This is probably one of the most simple products on the market anywhere and even with some added ingredients for flavors, this is still a really nice product that is non-GMO and healthy.

Triscuits were not offered with flavors until the 80s when flavored crackers became a new idea. Triscuits embraced this new style of product and the fact that they were made with such a generic and simple original flavor profile made them perfect for this kind of diversification.

Thin Crisps are one of the newer additions to the lineup of Triscuit offerings and they have their own set of unique and really good flavors.

There are also Brown Rice varieties these days as well.

There are minis available as well in original flavoring.

Slogans and Marketing Materials for Triscuit

In the early days, the full slogan for Triscuit was, “Triscuit is baked by electricity, the only food on the market prepared by this 1903 process”.

Triscuit was originally marketed in basic boxes that were much like all the other cracker brands on the market at the time. The boxes were blue and yellow and the lettering blocked and square in shape. The 40s saw a few changes and additions to the lettering and some information was added about the way that the crackers were made.

The 60s saw the arrival of the box styles that are familiar today. With the advent of larger and more square boxes that were like little cereal boxes, cracker boxes could say a lot more about the product inside. Ironically, Triscuits are so simple that the boxes mostly just showed the product and said that they were healthy and simple to eat.

The box designs have not changed much since the 60s. The same picture style of the product is still in use and the simple lettering of the logo has not changed since the 60s in any large way either. Even the varieties of the basic original cracker are still shown in much the same way as the original.

What is a Triscuit?

Triscuits are owned by Mondelez International.