If you love chewing gum, you are probably familiar with Trident gum. This is one of the biggest names in the chewing gum industry in the United States and Trident has been around for a long time. You probably have had one or more of the various versions of this gum product and many people refer to chewing gum for breath freshening as Trident gum.

Trident gum was not sold in the UK until 2007, but it is popular there already despite the short time that it has been on the market. Some of these original gum products seem to have dialed in the right amount of sweetness, texture, and lasting flavor to make people come back to buy them again and again. Trident has been able to evolve into a product that not only is better for you than sugary gums, it has successfully marketed itself to kids as well as adults. This is a rare feat and it is part of why this “healthy” gum has been a success for so long.

Trident gum is actually sugar-free chewing gum. It was originally made using the American Chicle recipe and products and was bought by Warner-Lambert in 1962. The product was just licensed for sale in the UK under Cadbury Schweppes in 2007 but it has been sold for years in other European countries for years under the name Stimorol. There are not many products that are sold in so many places under another brand name, but Trident gum has been marketed and sold successfully this way for a long time.

The gum is stated to be sold with 3 ingredients that prevent the formation of tartar on teeth. The company also states that Tri in the name of the gum refers to these three ingredients and then the dent is of course referring to dentists. The company says on its website that the gum is sold in 70 countries and that it was the first gum in space as well. Apparently, this gum has been on every space shuttle mission since 1981!

Trident gum came to be when the use of artificial sweeteners began to be a reality in the 1960s. The original recipe used saccharin rather than sugar. None of the inverted sugars that we are familiar with today was an option at this time. During this period, the options offered were real sugar and saccharin. Today’s sugar-free product market is much more varied and offers you many more options to pick and choose from.

When Trident gum first hit the market in 1964, the slogan that it was sold with was, “The great taste that is good for your teeth”. Sugar-free products were originally marketed as being the right choice to prevent cavities but were not connected with weight loss or with diabetic diets. At the time, sugar was not blamed for any of the other much more serious health issues that it causes, and those lobbying against it were mostly focused on its impact on children’s and adult’s dental health.

It can be hard for modern audiences to understand just how new the information about cavities was in the 1960s. Dental caries had not been well-researched to this point and the connection between diet and cavities was not made until the 60s either. This discovery led to new attention to the food industry, particularly with regard to sugar. Candy bars were downsized some and kids were directed not to eat so much candy each day. This was a big change if you consider that candy bars were sold as meal replacement items well into the late 50s.

For most of the years of Trident’s record sales, the product was sold with the slogan, “Four out of five dentists surveyed recommend sugarless gum for their patients who chew gum”. This slogan probably came from the results of surveys that were done in the early 1960s and not current information. When the company changed hands in 2014, Mondelez was asked about the famous survey that led to this slogan and branding technique for the gum. The company has declined to reply, which might tell you that the survey is proprietary but also that it might not hold up against modern standards for these kinds of studies.

As of the early 2000s, “See What Unfolds” is the new slogan for the brand. Today’s version of Trident gum contains the sugar alcohol xylitol which is still technically known as a tooth-friendly sugar. There is still controversy surrounding this ingredient, however, but not because of dental health concerns. The more recent concern about selling products that contain this sugar is that it is highly toxic to dogs. Many people are not willing to have Trident in their home for fear that their dogs might eat the gum and die. 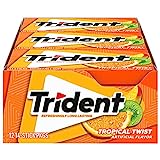 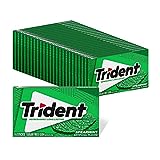 The original recipe for the gum is:

There are various versions of this delightful gum these days. The original was the only product that the company sold for many years, but they branched out more recently to offer a wide array of different gum varieties. The different versions of this gum are:

Vibes are fruit flavored and also offer sour flavor options. There are also spearmint and peppermint versions of the Vibes product. Trident fresh is supposed to have an extra refreshing flavor and Trident White gums promise to whiten your teeth while you chew them.

Trident gum layers are fruit flavored and have a core of strong, tart fruit filling that is really nice if you like this kind of gum. Trident unwrapped are small, soft gum sticks that are sold in a plastic cup. Trident Splash comes in Strawberry with Lime and Peppermint Swirl.

Not every area offers you access to all of these different flavors but you can sometimes order them directly from online sellers if you want to try them all. Most people will have only been able to try the original or one of the other unique flavors because these different versions are not always sold at grocery stores or in gas stations.

This gum was originally sold in really simple packaging that was like any other gum. The chicle shape which is small squares with a hard shell on the outside has remained a part of the product design. This meant that the original packaging did not hold up as well as when it was used for gum products that were sold in stick form.

The shift to the small cardboard sleeve with the perforated plastic and foil container inside of it has been around for more than twenty years. This was a big improvement for the prevention of destruction of the product when stored in a purse or backpack. It also helps lock flavor in, which it does better than gum products that are sold in packages with simple paper wrappers on each stick of gum. The trident gum livery has also changed to keep up with the changing times.

Through the early 90s, the gum was sold with relatively simple designs on the packaging. The colors matched the flavors and there was little fuss or fanfare behind the way the gum was packaged. Now, however, the various flavors are indicated by colorful wrappers, pretty pictures of what the flavor is, and sometimes even different versions of the logo lettering when compared to the original. This is a gum that has been able to stay relevant without forgetting its roots and the livery has been one way that the Trident company has continued to evolve to keep up with changing times.

One of the best parts of the livery change is that it has been able to appeal to younger people as well. Kids actually will choose Trident gum on their own, which is really key to the success of the brand as a whole. No one wants to have to tell their kids that they can’t have “fun” gum products in order to keep their teeth healthy, but Trident gum has made it easy to sell the gum to kids due to their colorful and relatable livery choices.