The 3 Musketeers candy is a classic and popular candy that can be found almost anywhere in the US. It is a common candy bar to be offered to kids as Halloween candy and it is sold in many sizes for your enjoyment. This is one of the best candy bars in this category and for those who like soft and chewy candy bars, this is the right choice to make.

This candy bar has long been associated with a mousse-style middle finish and you will love that you get a really chocolatey and enjoyable taste experience with this bar. There are various varieties of this candy bar on the market as well, which can make it a better fit for different taste preferences.

The first packages of the candy bars were sold with a chocolate bar, a strawberry bar, and a vanilla bar. These were packaged in the same wrapper but were three unique bars. This is why the brand was named 3 Musketeers in the beginning as well as being linked to the 1844 novel by the same name.

The costs of making three different flavors of candy bar were prohibitive eventually, and the vanilla and strawberry were phased out. This candy had been sold at 5 cents each in the beginning but over time the costs of course rose significantly.

The change to a larger candy bar that was all one flavor was actually a good chance to keep up with the way that the market for candy bars was changing as well. This also made it easier to market additional flavors of the candy bar, like vanilla, as its own variety. They recently marked the 75th anniversary of the candy bar’s sale with a brand extension. This was done in 2007 and this addition to the lineup was French Vanilla. They also added Mocha Cappuccino and Strawberry as their own unique flavors.

This brand addition was also produced altogether in the Autumn Minis Mix version of the candy bar. They then added a Cherry 3 Musketeers candy in 2008. There was also a Raspberry and Orange added for Easter in 2008. The orange version was made with milk chocolate and the other two bars were made with dark chocolate coatings.

In 2019, Mars added a birthday cake flavor that was made in mini bar sizes as well as sharing-size bars. This is the newest bar in the line-up and adds another option for the enjoyment of this unique candy bar with soft and delicate filling.

Marketing of the 3 Musketeers Candy

This candy bar was originally marketed by word of mouth mostly. Candy bars were often marketed mostly in this way early in the history of candy bars. This became less practical as more and more candy bars were sold in each category and type.

3 Musketeers candy were first advertised in a big way on the 1950s show Howdy Doody. This show advertised this bar with the Buffalo Bob Smith song that kids sang along to on the show. This was a big hit with kids but did not reach adults at all.

The candy bar was later advertised in 1998 with the three musketeers that the bar was named after. These actors advertised the candy bar as having 45% less fat than other bars. This campaign was put together by the same company that developed the California Raisins ads that were so popular during the same period.

The original slogan was “Big on Chocolate!” and “Big on Chocolate, Not on Fat!”. The candy was later marketed on TV with female actors who promoted the candy as a, “Nice, Light Snack”. This ad campaign again targeted the 45% less fat note that earlier ads had focused on as well.

The candy bar has been marketed since 2015 with the Mars, inc. YouTube channel. This has been a big success to try to reach a younger audience. The campaign has had mixed results overall, but it still exists and has over 30 thousand subscribers. This is a strategy that depends on influencer marketing a lot, and this is probably what has made the channel as successful as it has been overall.

What Sizes Are 3 Musketeers Sold In?

There are various sizes of the 3 Musketeers candy bar that are on the market. You can get all of the varieties in these sizes, and the original bar is sold year-round in these size options.

The fun-size bar is slightly bigger than the minis which are just a little bite. This mini-size version of the candy bar is really popular and this is one of the key candy bars that are sold for Halloween giving each year. The minis and the fun size bars are some of the most commonly given out candy bars each year on Halloween. 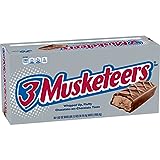 The Amazon entry for the 3 Musketeers bar says that the ingredients are the following:

This is a really simple candy bar and the only difference in this list that comes into play is flavoring for the additional varieties of the candy bar.

There is something of an urban legend that connects the Milky Way bar and the 3 Musketeers candy bar. While there was probably never much confusion about the fact that these were different candy bars with similar flavor profiles, the urban myth persists that they have always been confused with one another. Some people even claim that they are the same candy bar that has been rebranded and called the 3 Musketeers Bar in some markets.

These are unique candy bars and always have been. The Milky Way Bar was sold first and the 3 Musketeers candy bar came on the scene much later in the history of this style of candy bar. That being said, they are very similar in flavor and texture, and you can probably switch one for the other with ease if you are looking for this specific taste and texture experience.

The confusion about the bars being so similar has even extended to the name since Milky Way candy bars are made with three ingredients. Since many people do not know the story behind the naming of the original 3 Musketeers candy bar, this is an easy confusion to occur. Many people are not aware that the original bar came in three flavors inside one pack and so the urban myth of the candy bars that are actually the same candy sold under different names persists even today.

You can trust that you are going to be able to buy both kinds of candy bars even today and they will be slightly different from each other. The Milky Way Bar is sold in fewer varieties and offers nougat and caramel in its overall flavor profile. This is a bit different than the simple mousse filling of a 3 Musketeers bar and you will be able to tell that they are not the same when you try them side-by-side.

Perhaps another layer of confusion about the two bars occurs because Frank C Mars did make them both, but the Milky Way Bar was made in 1923, while the 3 Musketeers candy bar did not hit the shelves of candy stores until 1932. The former way of marketing candy bars through word of mouth probably helped to fuel this confusion and this myth as well.  Word of mouth can be great for unique candy bars, but it does cause this kind of confusion when the same company makes two similar candy bars within a few years of each other.

A fun How It’s Made video from back in the day: