Many of us fondly know Nesquik cereal for things like chocolate milk or perhaps even strawberry milk. Their fun commercials and mascot bunny stick out to many of us, children and adults. They notoriously have chocolate powder and strawberry powder but they continue to add to their lineup of tasty treats.

Now, Nesquik has cereal and it comes in several different flavors. Just like their drinks and milk, you really can’t go wrong with this fun and tasty cereal, especially if you’re looking for a sugar rush or a chocolatey treat.

The Nesquik company is part of Nestle. Nestle is known for a ton of different types of candy and various foods. Now, you can mark them down for their Nesquik cereal. This cereal is kind of cool because it is made with whole grain. Nestle has always tried to incorporate some modicum of nutrition into things like this so you see that displayed here as well.

Nesquik cereal, at least the chocolate kind, is known for its irresistible chocolate taste. The kids have no idea that the cereal is also whole grain guaranteed so moms, dads, and kids can all be happy about it.

The cereal is just little chocolate balls of fun. Loaded in milk, you get chocolate milk and chocolate cereal all in one. The cereal comes on the heels of Nesquik’s other popular products, like their powder for flavored milk.

While we’ve mentioned chocolate several times, this is because chocolate was the starting point for almost all of the Nestle products. They do have other flavors but we simply refer to chocolate because that’s what the original Nesquik and the Nesquik cereal were made of.

Nesquik cereal first came out in the United States in 1999. It has always been a popular cereal. While General Mills and Nestle originally partnered up together on this creation, Cocoa Puffs and Nesquik cereal are very strong competitors in the cereal industry. They easily run neck and neck. This should be no surprise considering the two cereals are extremely alike.

This is a whole-grain cereal, which sets it apart just a little bit in the cereal industry. While it still has sugar and other additives, they also focused on nutrition and made an effort to provide some vitamins and minerals in the mix.

The cereal is popular in the United States but it is also sold in several other countries. These include Canada, UK, France, Hong Kong, South America, Asia, Europe, and more. In fact, it’s available in more than 40 countries worldwide.

Nestle advertises Nesquik cereal as “the only breakfast cereal with the irresistible taste of Nesquik chocolate in every bite.”

We’ve touched on nutrition a couple of times but we will cover that in more detail later in this article.

When Was Nesquik Cereal Invented?

Nesquik cereal first was introduced in the United States in 1999. Unfortunately, Cereal Partners decided to stop selling it in the United States several years ago. While it was popular here and even a direct competitor to Cocoa Puffs, they made the decision to only sell it in other countries.

The company never told the world why that decision was made so it’s impossible to know if it was related to the Cocoa Puffs competition or whether there was some other issue involved.

We know that Nesquik was owned by Nestle and the cereal was always distributed under the name Nestle but General Mills and Nestle actually partnered together to design and distribute this cereal under the Cereal Partners brand.

While it’s since been discontinued in the United States, it is still available in more than 40 countries worldwide.

The Nesquik line of products, including cereal is owned by Nestle. The cereal itself came from a partnership between General Mills and Nestle that went through the Cereal Partners brand. However, Nesquik was still always branded and distributed under the Nestle name.

It continues to be sold as such as a Nestle product in the countries in which it is readily available.

How Did Nesquik Cereal Get its Name?

Honestly, the name is pretty obvious here. Most kids know the Nesquik brand for the powdered flavors to create flavored milk. They have vanilla, strawberry, and chocolate. They probably have other flavors out there too.

Nesquik cereal is called such because it goes with the Nesquik flavor. It was marketed as the only cereal with Nesquik flavor in it and so the name makes sense! They still used the fun bunny mascot that they always used as part of the Nesquik line of products.

As far as marketing, they usually focused on children but always touched on the nutritional aspects for parents who may be watching as well.

While Nesquik itself has a ton of different flavors for milk, they never really expanded the flavors of the cereal. It was always made to be a chocolate cereal. We’re not sure if they just felt like the other flavors might not really attract attention or if they just wanted to stay competitive to Cocoa Puffs.

Whatever the reason, chocolate is the only flavor for the cereal.

Let’s look at the nutritional details for just a moment. We think these are important elements to touch on.

Nesquik cereal was always presented as being made with whole grains and not having added sweeteners to worry about. In fact, the whole grain makes up 53% of the cereal. In addition to this, the cereal also has several B vitamins in it and the brand was always proud of having nutrition in a tasty cereal.

The cereal was designed to be good for everyone in the family but also to have some benefits to the kids most likely eating it. With that, they used Vitamin B3 and Vitamin B6 for psychological health and cognitive functions. Maybe it can help with their learning and behavior at school.

Of course, it also had B5, which was good for mental performance. In addition, Nesquik cereal is a good source of iron. In addition to the whole wheat, the cereal did contain some sugar, salt, glucose, ad cocoa powder as well.

Break it down a little further and you will see that it has a good source of protein to contribute to a child’s energy needs. The percentage of fat was pretty minimal in the formula. Despite the positive elements, the sugar and carbohydrates could potentially be areas of concern for some parents out there. However, you can see that Nestle made a concerted effort for basic nutrition. 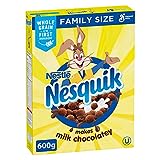 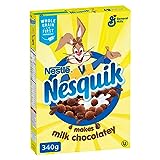 Nesquik 340 GRAM CEREAL It turns the milk chocolatey so that the NESQUIK chocolate flavour can be experienced from the first bite to the last milk drop!
$14.99
Buy on Amazon
Bestseller No. 3 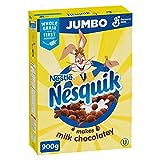 Unfortunately, since Nesquik cereal was discontinued in the United States, you probably won’t find it online or at local grocery stores in the US. However, keep in mind that it is sold in more than 40 other countries so it is readily available many places out there, including Canada and Mexico.

It’s a worldwide cereal. In the regions where it is still available, it can be purchased both online and in grocery stores. You can hop on the Nesquik website and use their tool to find a location to buy near you. Keep in mind this works for the countries that the cereal is in. The tool has in-store and online purchasing options to choose from.