Cocoa Puffs were introduced to the American breakfast table in 1956 by General Mills. The cereal is puffed corn and rice infused with real chocolate — Hershey’s cocoa to be exact.  Cocoa Puffs were a cousin to Kix cereal, which was essentially a chocolate-less puff cereal, and Trix, which were fruit-flavored puffs.

From the start, Cocoa Puffs were a hit in America, and eventually became a staple for families around the world. Cocoa Puffs were part of a strategy born during the Great Depression years before, when General Mills refocused its empire away from milling flour and to new avenues of business. General Mills debuted its first cereal, Kix, as a way of delivering a food with more Vitamin D. Kix was the brainchild of something else new at General Mills: A research team. That research team also gets credit for leading the invention of a puff gun, which gave General Mills the ability to produce a puffy cereal like Cocoa Puffs rather than the flakes that were already on the market.

A few years later, in 2011, General Mills released Cocoa Puffs Brownie Crunch, sticking strong with the chocolate approach. Cocoa Puffs Brownie Crunch cereal had little square brownie-style pieces billed as a combination of natural and artificial flavors. This cereal offering didn’t last forever. It was discontinued for years until it was brought back to much fanfare in 2020.

In 2017, in keeping with a dessert theme, Cocoa Puffs Ice Cream Scoops hit the shelves as a limited release. Ice cream for breakfast might seem a bit off the wall, but we are talking about a line that already included chocolate and brownies. The Cocoa Puffs Ice Cream Scoops cereal was also came ina square shape but included a combination of strawberry, vanilla and chocolate. Think of it as Neapolitan breakfast treat.

For people who like their cereal a bit more cozy, General Mills recently debuted a breakfast version of a classic winter drink: Hot chocolate. Swiss Miss Cocoa Puffs Hot Cocoa cereal was released as a limited-edition seasonal breakfast treat. The cereal takes the classic Cocoa Puffs and adds fluffy miniature marshmallows. Still served cold, the cereal aims to warm the soul if not the body.

General Mills also created some products using Cocoa Puffs cereal in a different form. This included a breakfast cereal bar with a bottom made with sweetened condensed milk. The idea was that a consumer could have a bowl of Cocoa Puffs with milk without the bowl or the milk, at least in liquid form.

Cocoa Puffs cereal has had one mascot, and a relative, for all these years. While the cereal was offered in 1958, the iconic character made his debut in 1960. Sonny the Cuckoo bird was featured on the cereal’s boxes, in print advertisements and in television commercials.

Sonny’s story remained pretty consistent over the years. He is a bird on a mission. He’s laser focused on whatever task he is working on, until Cocoa Puffs enters his consciousness. This could be via something simple that reminds him of the cereal, particular words (often “munchy, crunchy, chocolately”) or by children who aim to tease. Inevitably, Sonny caves to his cravings and proclaims, “I’m Cuckoo for Cocoa Puffs.” That catchphrase stuck with Sonny from the start and is still used today.

Sonny has been voiced by just two people. Chuck McCann was Sonny from 1962 to 1978, and Larry Kenney has been the voice since 1978.

McCann had a long career in entertainment, starting in regional comedy on the East Coast and eventually moving to Los Angeles, where he found a career in television in movies. In the 1970s, he appeared in popular shows including, “Little House on the Prairie”, “Bonanza” and “The Bob Newhart Show.”

Kenney started his career in radio, getting his first disc jockey gig at the age of 15. He later was a featured performer on “The Don Imus Show” and was known for his uncanny impressions people like Andy Rooney and Ross Perot. Sonny of Cocoa Puffs fame wasn’t the animated character Kenney voiced. You might recognize him as Count Chocula.

How did General Mills name their cuckoo bird? The name actually comes from the commercials themselves. In the original ads, Sonny appeared with his grandfather. Rather than using proper names, they called each other “Gramps” and “Sonny.” Poor Gramps was dropped from the Cocoa Puffs ad campaign early on, but Sonny remained. Don’t feel too bad for Gramps, though. He made a comeback in 2010 and appeared once again with his grandson in a commercial.

Gene Cleaves, a pioneer in the field of animation, worked on the early design for Sonny and Gramps. Sonny’s original wardrobe featured in ads for Cocoa Puffs consisted of a striped pink and white shirt. In the 1990s, he got some new looks and a Disney style look. That lasted until 2004, when Sonny went back to his roots in terms of design, and he shed his clothes, going with a strictly birdie look.

In December 2009, after years of complaints about the sugar content in breakfast cereals, especially those marketed to children, General Mills announced that it would cut the sugar in 10 of its cereals, including in Cocoa Puffs. They cut each cereal’s sweetness to under 10 grams of sugar per seriing, which was up to 25 percent of the sugar in the original recipes. While this may have impressed some health-minded consumers, the lower-sugar variety had some people questioning what happened to their beloved breakfast cereal.

After about 10 years of making the less sugary version of Cocoa Puffs, General Mills jumped on the retro bandwagon, and In 2020, it bought back the original recipes for four of its ready-to-eat cereals: Cocoa Puffs, Golden Grahams, Cookie Crisp, and Trix. 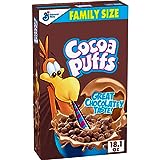 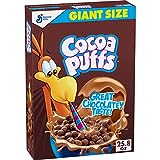 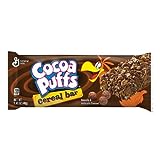 What’s in a memory?

In around 2010, when the term “Mandela Effect” began trending all over the internet, Cocoa Puffs became a part of the craze.

The Mandela Effect is a term used to describe a memory that seems so real that large groups of people swear they remember it. The term came from a phenomenon where mass groups of people came to believe that Nelson Mandela had died in prison in the 1980s, when in fact he was very much alive. The memory was so realistic that people were adamant that they remembered seeing news clips and remembered specific details about the death and the news coverage.

Cocoa Puffs are often featured in lists of examples of the Mandela Effect. It seems people are positive that the cereal was once called “Coco Puffs” instead of “Cocoa Puffs.” Sites on the internet even purport to show boxes of the cereal with the “Coco Puffs” name. As with the death of Mandela, this collective memory is simply wrong. Cocoa Puffs have always been “Cocoa Puffs,” and people remain cuckoo for them.