If you love chocolate milk, Nesquik is one of the most popular options on the market to enjoy flavored milk. In the United States, you might be familiar with Nestle Quik. These are ultimately one and the same.

However, most people assume that Nesquik is only about the chocolate milk. The truth is they have other flavored drink mixes, but they also have been a part of things like cereal and other breakfast creations since the beginning of the brand. Think of Nesquik like a brand. While the flavored milk is their most popular product, you will find that they have plenty more where that came from.

Let’s jump back to the beginning. Nesquik has been around for a lot of years. The brand is produced in Switzerland under the Nestle umbrella. Initial production of Nesquik started in 1948. The overarching purpose behind the brand was to provide a drink mix to make chocolate milk.

This Swiss company grew quickly in popularity throughout Europe. They also launched Nestle Quik in the United States around 1950 with the same chocolate milk mix product. The two brand names remained separated in the different countries until about 1999. It was then that they combine everything to the Nesquik name, and it has been known as such ever since.

The original Nesquik was a simple chocolate powder that you scooped into a glass of milk and stirred. However, later on they added syrups, pre-made drinks, additional flavors, hot chocolate, cereal, candy bars, and more to the product lineup.

In fact, the cereal that was associated with the brand was called Nesquik Cereal and it was introduced in 1981. If you’ve ever had Cocoa Puffs, these two cereals were very similar. The cereal was marketed with the slogan that it “turns into chocolate milk” so you could say it was still a chocolate milk product, right?

Interestingly enough, the brand never had any issues, but they were forced to issue a recall in 2012. The recall was voluntary and only pertained to some of the United States packaging of the chocolate flavors. The recall was completed out of caution after one of Nestle’s suppliers let them know THEY had a salmonella contamination. This has been the only noted recall in their entire history, which says a little something about the quality of the brand and product.

The original Nesquik milk mixes had quite a bit of sugar in them. Over the years, this is something that more and more parents found concerning. In fact, Nestle faced quite a bit of backlash over their ingredient label for several years. This led them to start planning to update and change the formula, they started that project in 2017.

Unfortunately, it’s unclear whether the formula has yet been changed. The powdered milk formula still contains 12 grams of sugar per serving. This could be acceptable as long as the child isn’t having a ton of other sugar throughout the day. It may be that they continue to search for the best way to improve the formula without losing the flavor it is known for.

The powder does still offer nutrition. They don’t have any high fructose corn syrup in it, which is a tremendous advantage. They also state that the powder is considered Kosher. There are no artificial additives and they do use real cocoa in the creation of this powder. It’s positive in terms of protein as well.

When Was Nesquik Invented?

Nesquik first came out in the industry in 1948. It was originally known as Nestle Quik in the United States, but they rebranded everything to be consistent from Europe to the US in 1999. This is when the entirety of the brand became Nesquik rather than having the separation of Nestle Quik in some areas.

This provided consistency and reliability behind the brand. They have never had a lapse in production, although they did have one small recall in 2012. Through the years they have added other flavors and products. Many of them are still available, although some have been discontinued over time.

Now, you will find the traditional powder, syrups, and ready-made drinks. They did have a short span of cereal and their powder can be used for regular milk or even hot chocolate if preferred. Some of their ready-made drinks are protein shakes as well.

Nesquik is owned by the Swiss company Nestle. It has always been owned by Nestle, even when the name was Nestle Quik. Ownership has never changed hands. While some products have changed or gone away through the years, the brand has remained consistent, and the original product remains as is.

The brand has added other unique flavors and options over the years. Things like cereal and candy bars have also been a part of the lineup at times. However, it is our understanding that the candy bars and cereal are no longer available. They have stuck to drink mixes or ready-made drinks at this time.

How Did Nesquik Get its Name?

While we have a lot of history as to what has happened with the brand through the years, we really don’t have any stories about where the name came from. However, it seems fairly self-explanatory when you think about it.

Nestle is the owner of the drink mixes. Their original name was Nestle Quik and it was just a quick way to mix up a flavorful and nutritious drink for yourself or the kiddos. The name was adjusted to be Nesquik across the board, which appears to be a combination of the original wording, Nestle and Quik. If you look at the Nesquik official website, their history tells a similar story of the introduction of this “quik chocolate powder” designed to give moms an easy way to enhance milk for their kids and get more out of it at the same time. 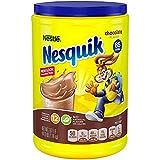 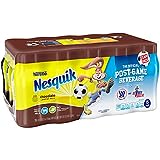 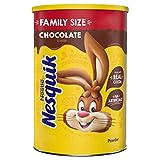 There have been some different flavor options and choices throughout the years. The original creation was just chocolate powder. Really, this was a great choice on its own. However, they have added flavors and taken away flavors over time.

Their first new flavor was banana, which came out in 1954. They added strawberry powder in 1960. They also did a short stint of vanilla powder in 1979. However, that flavor never really went over that well and has since been discontinued.

Other flavors like cherry, mango, cream, triple chocolate, honey, and crème soda were also flavors that came out for awhile and then were later discontinued. Some of them were specialty flavors and others simply didn’t have a lasting impact where flavor was concerned.

Here are the current flavors in their lineup.

These are just the powders.

However, they do have syrups and they have ready to drink mixes that are already mixed and you can just enjoy them. Some of these lines have flavors like chocolate, double chocolate, strawberry, vanilla, and dark chocolate as well. You will also find banana exclusively in their ready to drink line if you’re craving some delightful bananas!

Nesquik is perhaps something you remember as a child. Who doesn’t love a good chocolate milk, after all? While they have had some brand and flavor changes through the years, their initial milk chocolate powder continues to be the same formula as it always has been.

Nesquik offers protein, nutrition, valuable vitamins and minerals, and delightful flavor. Which flavor will you choose?