Dubble Bubble gum has been popular for generations, particularly in the US and the UK, and there are many varieties of gum on the market these days. Many of these gums are made to freshen your breath but at the beginning of the history of chewing gum, gum was made for the purpose of blowing bubbles. This was the original intention behind the design and manufacturing plan for gums like Dubble Bubble and many younger people are not aware that this was the original goal for making chewing gum.

If you have never had Dubble Bubble gum, you might not be familiar with the chewy and sweet goodness that this gum offers. This is a simple gum that is meant to help you to blow big bubbles that you can pop and it is good for chewing for hours. This is not a gum that is made to freshen your breath but there are many other wonderful qualities related to this gum that you can still enjoy today.

Dubble Bubble was first made by the Philadelphia-based Fleer Chewing Gum Company. It was released for the first time in 1928 and was the same bright pink color that is still associated with the gum. The creator of the gum, Walter Diemer, was known for creating chewing gum based on the original Fleer ingredients. He had been involved in the original gum recipe that Fleer used in 1906, and he continued to tinker with the recipe over the years following the creation of the original recipe.

Fleer had made his own recipe in 1906 but it had been too sticky and broke apart too easily. 20 years later, Diemer came up with a better version of this original gum and Dubble Bubble was born. The first successful batch of the gum was 300 pounds and the only food coloring on hand was pink. This was the recipe that would become the famous Dubble Bubble, and it was based on mostly a happy accident.

Diemer hand wrapped the first 100 pieces and took them to a local candy store. The Fleer company began using this new recipe after the success of this first batch and this gum recipe became the first-ever commercially sold bubble gum. The first year Dubble Bubble was on the market, it sold $1.5 million dollars worth of products.

The original gum was marketed by salespeople trained to blow bubbles with it and there was a comic strip made to advertise it called, “Fleer Funnies”. In the comics, characters “Dub and Bub” went on adventures until Fleer Fortunes and Dubble Bubble Facts. The comics and other offerings were large and colorful and were run through the 1960s. In the 1950s, the original mascots were replaced by “Pud” and his friends.

Dubble Bubble gum was included in food packs and MREs sent to the soldiers during WWII as well. The sugar and latex that were needed to make the gum were scarce during the war, however and the manufacture of Dubble Bubble gum was halted for a time after 1942. By 1951, the gum was back on the market and new flavors and formats for the product were offered. In 1957, the first 6-pack was sold.

During the Great Depression, when other products could not be sold to people who had no money, Dubble Bubble was only a penny. This meant that even the poorest people suffering through the depression could still buy a little treat for themselves once in a while in the form of a piece of Dubble Bubble bought at a local shop.

The gum brand was sold to Concord Confections in 1999 and a giant Dubble Bubble gumball was made. Tootsie Roll Industries then acquired Concord and Dubble Bubble was made with a slightly different recipe and the comics on the interior of the wrappers of the gum were discontinued. Pud is still one of the mascots to this day, however.

Diemer stayed with the Fleer company for the rest of his career and retired in 1970. The company was sold shortly after he retired and the changes that have become common knowledge for gum lovers took place. The gum is not exactly the same these days as Diemer’s version, but the messaging and the taste are very much the same. Gum is mostly marketed for breath freshening purposes these days, so Dubble Bubble is occupying a shrinking market space.

Making gum just for blowing bubbles is not as common as it once was and you might be shocked at the kind of bubbles that you can blow with your Dubble Bubble gum. This is still a huge draw for the gum and the ability to blow large bubbles with ease has not lost its charm for those who were aware that this was a lot of fun in the past.

Besides the comics and the other ways that the mascots of the gum promoted it, Dubble Bubble was also known for the Fleer Funnies that were wrapped around each piece of the gum. The waxy paper of the gum wrappers was used to deliver small, bite-sized comics to those who bought the gum.

The style of these comics changed over the years from the colorful Dub and Bub style comics to ones that depicted stick people but the messaging was fairly similar for years. Later on, the wrappers bore jokes that could be told to others or strange and interesting facts that could be shared. This is one of the first instances of this kind of marketing being done and later candy companies and other gum makers would copy this clever little marketing trick for their own products. 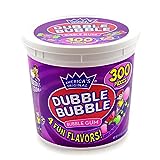 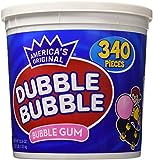 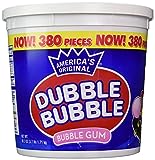 You can also buy Dubble Bubble Gum at Old Time Candy by clicking the image below.

From the Wikipedia entry for the Dubble Bubble gum, the ingredients are:

The original ingredients were simpler and were sugar, dextrose, corn syrup, gum base, artificial flavor, color, corn starch, and BHT.

The models for the sale of this gun vary. You can get them in “chunks” or in individually wrapped gumballs. There is also the giant gumball version and there have been seasonal versions of the gum that have been shaped more like mini gumballs. These are often sold in milk-carton style containers that feature cartoony Santa Claus or other holiday figures.

When Diemer was trying to make a better bubble gum than the first recipe that had been created with Fleer, he had to get creative and come up with tests and experiments to see if his ideas were working. He knew that the blowing of small bubbles was possible with the product, but he wanted to get the end results to be less sticky and to make better bubbles.

The first experiments ended up with a gum that blew bubbles but got too hard to chew as soon as it had been in your mouth for a while.  This was less sticky than the original recipe and did not fall apart, but also did not make for an enjoyable chewing experience.

He then tried adding more latex to the mix. This made the gum more elastic and enjoyable to chew for long periods of time. This required another round of testing by volunteers. When the first batch of the improved gum was made, it was grey. No one thought that this would sell well and it looked frankly unappetizing.

This is when the aforementioned pink coloring of the 20s candy was thrown into the mix to give a more appealing finish to the gum product. The pink color is still the traditional color of the gum and you will find that most of the versions that are for sale of this gum product are still made in this Pepto-Bismol reminiscent shade of pink.

Is There a Patent for Dubble Bubble?

In one of the stranger twists of the story of Dubble Bubble, neither Diemer nor Fleer ever took out a patent for the gum product they had made and sold. They claimed that they did not want to reveal the secret of the recipe and that was why they never did so. Fleer had patented other products but the attorneys involved in the question were not sure how to progress. It is more likely that the company did not want to have one of its employees hold a patent for their major product.

It is also not likely that Diemer ever signed a waiver or any other paperwork related to the invention. The company likely just thought it best to leave well enough alone. Thankfully, Fleer did recognize that Diemer had crafted this important and ground-breaking product for the company and he promoted Diemer to head of the product line.

A taste test and review of the gum: