I scream, you scream, we all scream for ice cream! And what better place to reach for some of the best ice cream around than a tub of Ben & Jerrys? This American company really knew what they were doing in terms of delicious ice cream and other similar frozen products. With a multitude of flavors and a lot of fun history, there is much to know.

Ben & Jerry’s is operated under the umbrella of Ben & Jerry’s Homemade Holdings Inc. While this company certainly is not the longest standing ice cream market out there, they have been around for nearly half a century. The company was founded in May of 1978, and they’ve been running strong ever since.

This company started out its success in Vermont, USA. It’s an American-made company that is primarily known for ice cream. They also have had frozen treats, frozen yogurt, and sorbet items through the years.

We will talk just a tad bit more about the name in a bit. However, the founders of the company were Ben Cohen and Jerry Greenfield, and so the name made sense. These two men were raised as best friends and they both experienced some things in life that brough them to the place of creating the company.

Jerry went to college with the intention of going to medical school and was unable to be accepted into medical school. Ben dropped out of school at some point. The two came together and decided to attend a correspondence course on making ice cream in Pennsylvania and that’s where the true magic began.

The two opened their very first ice cream parlor with just $12,000 in hand to make it work. And here we are more than 40 years later. You can purchase their products in retail and grocery stores across the nation. There are also still Ben & Jerrys stores as well and these have a free cone day every year on the anniversary of the beginning.

From their first ice cream parlor, they were able to expand into a building where they could create their ice cream and package individual pints to sell as well. This led to the Ben & Jerry’s franchise beginnings. Their ice cream was always known for being unique with chunks of flavor mixed into the ice cream itself.

In 1983, Ben & Jerrys helped break a record by having their ice cream used in the creation of the largest ice cream sundae every made. It weighed more than 27,000 pounds. Now, that’s quite a sundae!

Several times, Ben & Jerry’s face opposition from companies like Haagen-Dazs. They were viewed as a threat and the competition knew they didn’t stand a chance. They tried to force Ben & Jerry’s to limit production but Ben & Jerry’s retaliated with lawsuits each time and came out ahead.

Ben & Jerry always made themselves present as a major part of the business. You may remember campaigns from the 1980s where they drove around the Cowmobile and gave away free scoops of ice cream. They drove across the country running this campaign.

All of their ice cream flavors have fun names and most have some sort of inspiration behind them as well. Take Cherry Garcia for example, which was named as a heritage to Jerry Garcia, rock legend.

The business has been seen in the media and has won awards through the years too. Here are a few of those highlights.

Much of Ben & Jerry’s displays in the media have been to protest the misuse of animals as well as the treatment of animals. They made a stance against cloning as well as chemical and hormonal products used on cows often. They also believe in economical differences, which is where the Mootopia project has come from.

This is just part of their intense history in 40 years.

The Ben & Jerry’s company was sold to Unilever in 2000. The agreement was that they would continue to adhere to the company’s social and economic missions and they have continued to do so. Ben & Jerry both stayed on with Unilever and remain an active part of the company.

When Was Ben & Jerry’s Invented?

Ben & Jerry’s ice cream was first invented in May 1978. The two founders had a unique background as friends, and they attended an ice cream making course together. They started out with a small ice cream parlor in a small, remodeled gas station and the business has significantly grown to what we know of it today.

Both Ben and Jerry continued to be an active part of the business, even after the brand was sold to Unilever. The ice cream has always been known for its unique compilation of chunky ingredients mixed into the ice cream to build on the flavors and the texture. This has always been something that sets them apart.

Ben & Jerry have made several plays for critical stances through the years. These are related to the quality of products, quality of animal treatment, and the quality of the ice cream that you receive. They also strive to make a positive impact on the environment.

Ben & Jerry’s is operated under the Ben & Jerry’s Homemade Holdings Inc umbrella. Official ownership falls under a company known as Unilever. The original founders remained in ownership in some way until they sold to Unilever in 2000.

They were strategic in the selling of the business as well. They were sure to include requirements to continue the missions and motto of Ben & Jerry’s and continue to look for ways to improve or contribute to the world in positive ways. Unilever has continued to reach for these challenges and stick to their promise.

How Did Ben & Jerry’s Get its Name?

It’s always nice to be able to determine where a name came from and how it stuck. In this case, Ben Cohen and Jerry Greenfield were the founders and owners of the company. They started from nothing and developed this business into an exceptional company with a lot to offer.

As best friends that grew up together and then went into business together, using the name Ben & Jerry’s as an element of who they were simply worked, and it continues to do so. They created something great and primarily unrivaled when you look at their business missions and how much they strive to do and accomplish for the world around them. 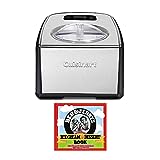 Ben & Jerry’s has always had a unique compilation of flavors. Their ice cream is known for being partly chunky within the ice cream and the flavors usually reveal the chunkiness mixed with the flavor combinations. They sell a lot of pints but also have some franchises and other options throughout the US.

The most popular flavor is Cherry Garcia, which has been ranked their top flavor since 2013. Cookie Dough is another popular choice and Chocolate Chip Brownie takes third place.

Some other flavors do exist. Half Baked has recently become more popular as a chosen pick. Chocolate Fudge Brownie is a hit as well. In addition to their ice cream pints, they have non-dairy pints, frozen yogurt, a Netflix line, and sorbet as well.

Here are some of their pint flavors.

This list could go on for ages. They have tons of flavors and a myriad of different products out there. Some flavors are more highly rated than others but there is a flavor for anyone out there.

Ben & Jerry’s certainly has a unique story. When you consider the foundations of the company and the things that they stand for, this business is the epitome of finding success and standing for what you believe in.

They have a sturdy foundation, and they continue to be a revolution in the ice cream industry.