If you love simple, chocolate candies, this is a great choice for you to make for your snacking hours! Maltesers have been around for years and they are still the same delightful, crunchy, sweet, and chocolate-covered treat that they always have been. This is one of the various versions of chocolate candy balls that have remained popular for many years but it might be the most memorable for most people.

This is originally a British product that has grown so popular that it is now sold in many countries. It would be unusual for anyone in these countries not to have experienced the sweet goodness of this candy, but if you have never tried any kind of malt-filled candy, this is a great introduction to this kind of confection. There is something really satisfying about these sweets and you should make sure to get some and try them if you have been missing out.

As mentioned before, Maltesers were originally a British product. This product was first sold in 1937 with the intention that this candy would appeal to women in specific. The sales of this product were expanded over the years to include markets in Europe, Australia, New Zealand, Canada, the US, and the Middle East. The Middle East and the US are the most recent markets with sales that began in 2017.

The slogan for this candy is, “the lighter way to enjoy chocolate”. There is a certain lightness to the interior of these candies which makes them really snackable. The center of these candies is made of malted material and the outside is surrounded by a milk chocolate coating. There are various kinds of packaging for this product since it is sold in so many markets, and you might see them in cardboard boxes, plastic bags, and even tubes or plastic buckets.

Ads in the UK also stated that a box of Maltesers made a great TV watching or movie watching treat, which has made them popular for enjoying when the family is visiting or the kids are out of school.

Maltesers were first made by the American candy maker Forrest Mars Sr. in England. The product was designed in 1936 and was not sold until 1937. They were originally sold to women as a means to generate energy. They were even called “energy balls” to help make it clear that this was the way they were intended to be used. The original product was sold in a fold-open box that was a lot like other mixed variety candies aimed at women during this time period.

The logo for the candy was inside the lid, so when it was opened you could see the Maltesers brand name displayed on the open lid of the box. The candies were stacked inside without separators but they apparently did not melt together or have other kinds of quality issues when offered in this way.

The original candy boxes and wrappers showed pretty women snacking on these treats and attracting handsome men their way. There are not many candy products that have been marketed so consistently toward one sex or with the intention to communicate that eating this candy would make you more attractive. Maltesers have a very unique history in this sense and this is one of the more memorable candies within this space due to this rather focused advertising ploy.

The original slogans were, “the lighter way to enjoy chocolate” and “no ordinary chocolate”. Later slogans included “Nothing pleases like Maltesers” as well, which is far catchier as far as slogans go.

The product was also sold with slogans stating that it would not make you gain weight. By the 30s, the ad campaigns were increasingly focused on the many reasons that this candy would not make women gain weight, and it was even sold like a dieting or weight loss product. This ad campaign was retired later on, but for at least a decade, weight loss was one of the main associations that people had with the product. Some marketers even claimed that this product would make you lose weight, something which had to be dealt with later on when this kind of medical claim could no longer be used for marketing candy, soda, and other food products.

Maltesers started to be sold in Australia via MacRobertsons in 1954, and then Cadbury took over in 1963. By 2011, the product had secured fairtrade accreditation in the UK and Ireland by making sure that all the cocoa and sugar are sourced under fair trade terms. The candy then took another positive turn in the marketing department by making sure that Maltesers were sold using ads that included disabled actors. There have been many improvements to the awareness of the brand over the years and this is one of the best changes to have been made.

This is a product that is very similar to the Whoppers but they have a slightly sweeter and more chewy nature to them that many people actually prefer. The presence of the Whopper candy that is so similar in the US marketplace was probably a big part of why it took so long for Maltesers to be sold in the US.

Today, the candies are made in Newmarket Ontario, and then sold to the North American market. Most of the candy that is made in Canada is actually exported to the US to be sold. About 80 percent of the candy that is made in Ontario is not sold in Canada but is instead sent to the US. This candy has gained a wide audience in short order despite competition with other similar products in the US marketplace. 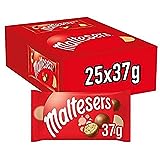 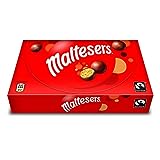 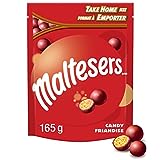 There are lots of different varieties of this candy, partially due to all the markets that they are sold in.

Maltesers are also offered in the Mars Revels assortment. This is a crossover product that might not be sold in all markets that the other products are offered in.

This candy is interesting because it is made differently in each market it is sold in due to compliance with various countries’ requirements for candy ingredients. This is one of the few products that is sold with so many different recipes to be compliant with the demands of so many different markets.

In Australia and New Zealand:

Maltesers ads shifted in the late 40s to be more focused on people of all ages and less focused on women or on healthy snacking. The new ads are a lot more fun and are often silly and whimsical as you will see.

One of the newer ads that are inclusive:

Maltesers are a British confectionery product manufactured by Mars, Incorporated. First sold in the UK in 1937, they were originally aimed at women.