If you like chocolate and caramel, then this happy mistake that became a Milk Dud is absolutely for you. While the original intention of the candy was not the end result, what we got is something delightfully chewy that has always been a big hit in the candy market.

This is a simple candy. It starts with a small ball of caramel. The ball of caramel is then coated in a chocolate coating. The chocolate is just made from cocoa and vegetable oil. When you put the combination of chocolate and caramel together, you get a chewy ball of goodness.

Each Milk Dud is just the right size to just pop in your mouth. You can chew them or you can suck on them and savor them, it’s totally up to you! We will talk more about the naming of this candy later but ultimately, the dud part of the name came because these were originally meant to be perfectly rounded every time.

That idea became a dud and we get the Milk Dud candy. Now, they embrace that every candy is unique and not perfectly spherical. In fact, for some of us, that simply adds to the enjoyment of the candy really.

Milk Duds were produced in 1928. They are coming very close to reaching their 100-year mark and we sincerely think they will make it there. You can find some nasty rumors out there that Milk Duds were discontinued but as of the time of this article, that simply is not true.

This candy was made by Hoffman and Company, located in the Chicago area. While they originated here, they actually didn’t remain with that company for long. M.J. Holloway & Company took over Hoffman and Company in 1928 and at that time, they also took over the production of Milk Duds.

M.J. Holloway and Company maintained distribution for a number of years, continuing production under Hoffman & Co. In 1960, Hoffman & Company was sold to Beatrice Foods, which means Milk Duds ownership was transferred at that time.

In 1986, Milk Duds again changed hands. Leaf purchased the brand for Milk Duds and continued production. Up until that point, the candy had continued to be produced in Chicago where it had originated.

However, Leaf moved production Robinson, Illinois into their own plant in 1992.

Just a few short years later, Hershey Foods Corporation acquired Leaf in 1996. With the acquisition, they took over several candies, one of which was Milk Duds. Milk Duds continues to be produced and manufactured by Hershey now at their plant in Hershey, Pennsylvania.

The Hershey Company did decide to make a change to the ingredients used in order to keep the costs down on Milk Duds. The formula changed for the only known time in 2008. They transitioned from using cocoa butter to oil substitutes that were more affordable. Because of this change, they were able to keep the price point low for this delectable candy.

At that time, Hershey did have to change their product packaging and labeling to be consistent with FDA standards. The FDA rules require cocoa butter to be used in order to term candy is coated in milk chocolate. Since the ingredients were changed, the labels must either use the term chocolate candy or chocolate coating for those guidelines.

When Were Milk Duds Invented?

Milk Duds were originally invented in 1928. Interestingly enough, they were not what the manufacturer intended them to be when the idea came to fruition.

The original plan for the Milk Dud was to have a perfectly round circle of caramel coated in chocolate. They tried many times but quickly found that it just wasn’t feasible to get the candy perfectly round so they gave up on that theory and kept the dud as their new idea.

Ownership of Milk Duds has changed hands several times over the years. Initially, Milk Duds were introduced by Hoffman and Company. They remained there for quite some time, even under the management of Holloway.

Later, they were sold to Beatrice Foods and then to Leaf. Finally, they found their most current ownership with Hershey in 1996 with the acquisition of Leaf. Hershey has owned them since that time and barring any unforeseen changes, we expect Hershey will continue to hold that ownership for the lifetime of the candy.

With the change of ownership also came changes in production location. They were originally produced in Chicago and stayed there until Leaf acquired the brand. Leaf moved production to their facility in Robinson, Illinois at that time.

Finally, when Hershey took over ownership, they moved production to their plant in Hershey, Pennsylvania and this is where they continue to be produced today. You can even visit Hershey Land and tour the plan, which is responsible for all Hershey Candy.

How Did Milk Duds Get Their Name?

We touched on this just slightly earlier but let’s take a moment to expand further now. When Milk Duds were originally produced, the intention was to create perfectly round balls of chocolate that had a caramel filling inside.

What we picture is a candy that looked almost like a Whopper malt candy.

Unfortunately, what happened is that the caramel and the chocolate were just so soft that turning them into perfectly round balls simply wasn’t working out. This is where the name dud came from in their title. What we lovingly know as Milk Duds is actually called so because they are a dud from the original idea for the candy.

The term milk used in the title is chosen because there are milk products within the candy, including the milk chocolate from the original recipe.

When you put the two thoughts together, you get the name Milk Dud and it seemed to stick.

You will notice that even though the candy was not what they originally planned for it to be, they’ve still kept it around for all of these years as a treasured candy favorite. 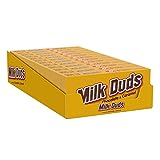 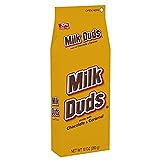 You can also buy Milk Duds at Old Time Candy by clicking the image below.

There have never been any other flavors of Milk Duds produced. Milk Duds are unique and have always stuck to their caramel and chocolate mixture and it’s clearly been working just fine for them all of these years.

Milk Duds are only a few years away from reaching 100 years of production. While the recipe did change just slightly in 2008, the candy has never produced other flavors and has always stayed relatively the same overall.

There are some articles out there that mention Milk Duds as being discontinued. However, this is a false claim. You can still easily find Milk Duds available on the market and it’s relatively easy to do so.

Online candy stores, real-life candy stores, Amazon, and several chain retailers all have Milk Duds available and the candy is incredibly affordable. You can find them in various gas stations as well. Finally, if you go to the movies, you will most likely find Milk Duds as one of the available candy options there too.

Milk Duds have a rich history but they continue to be readily available to savor and enjoy!

What are Milk Duds?

Milk Duds are a ball of caramel with a chocolate coating made by Hersheys.