Whoppers are a malted milk ball candy first introduced under the name of “Giants” in 1939, they are chocolaty and crunchy and are made from malted milk. Malted Milk is a powdered substance generally made from a mixture of malted barley, wheat flour, and evaporated whole milk.

Whoppers are about the size and shape of a very small ball, brown in color, and reveal a whitish and powdery-looking malted milk substance when bitten. Whoppers has changed hands between a number of companies over the years but has still maintained a loyal following of fans throughout the changes the product has experienced over the years.

Whoppers are chocolaty-coated malted milk ball candy. The outer layer contains a chocolaty coating of sorts, and the inner area has a crunchy malted milk center. The candy was not called Whoppers from its beginning. Initially, a company known as Overland Candy Company first introduced a candy known as Giants in 1939. It was made of malted milk and is considered the predecessor of Whoppers. In 1947, the company signed a merger with Leaf Machinery, Leaf Gum, and Chicago Biscuit Company.

After the merger, the combined unit came to be known as the Leaf Brands. It was not until 1949 that the old malted milk candy, Giants, was launched again in the markets. However, the old name was removed and the candy was introduced under the new name of Whoppers. Leaf Brands sold a similar candy around that time called Malt-ettes, however, these were much smaller.

The Leaf Brands company experienced quite a number of changes in ownership of its products during its journey back in the day. In the 1960s, W.R Grace bought all the products manufactured by Leaf Brands. More than a decade later, Leaf Brands got the ownership of its products back in 1976. At last, the Hershey Foods Corporation took over the North American confectionery operations of Leaf Brands in 1996. After that acquisition, Hershey Food Corporation has been the company that as of 2019 is producing Whoppers candy.

It was not only the name of the candy and its manufacturer that have changed over time. The candy was initially sold unwrapped, unpacked two for one cent. But eventually, the world was introduced to cellophane wrapping machines. Thereafter, it became economical for the company to pack candies before the sale. The manufacturer then started packaging smaller Whoppers and sold each packet containing 5 candies for 1 cent, and was called “Fivesomes”.  Soon after the popular days of the “Fivesomes”, Leaf Brands launched a new milk carton packaging which became the trademark look of the candy.

Apart from the packaging, the company introduced a different shape of Whoppers as well. At some time between 1949 and 1952, a new egg-shaped candy was launched named Whoppers Robin Eggs. Hershey Food Corporation then acquired the manufacturing of the candy, which launched Mini Whoppers in 2000. Hershey also reintroduced the Easter candy with three different flavors – vanilla, blueberry and orange cream – in 2016. Other flavors of the candy introduced by the company include a strawberry milkshake flavored variant which saw the light in 2006. It was not until many years when another variant, Reese’s Peanut Butter flavored Whoppers. However, the manufacturer ceased its production of this Reese’s version of Whoppers between 2014 and 2015.

The Hershey Food Corporation that produces Whoppers has its main presence in the American market. Its chocolate candy sales in the US in 2018 were worth $11.17 billion. As for Whoppers, it continues to be popular in the country and now comes in various kinds of packaging. Its packaging options include the old milk carton, theater box, standard and bag. Hershey continues to sell a variant of Whoppers: the strawberry milkshake flavor and Whoppers maintains a strong fan-following in the United States.

The Original Name Of Whoppers

Whoppers were not always called by that name. When this candy was first introduced to consumers it was originally called Giants. They were produced by the company Overland, before the company merged with others and eventually the product was renamed Whoppers in 1949. The renaming of a candy or food item is not too unusual, Apple Jacks and many other brands have done the same thing.

Sometimes for legal reasons, such as with Froot Loops, and sometimes for reasons such as marketing. In Whoppers case, however, it appears to be more of a marketing move for the 40s candy, if one were to speculate. Sometimes different names sell better in different regions, or indifferent times, or are just better choices overall in retrospect.

The Year Whoppers Was Invented

Whoppers candy was invented in the year 1939 under the name Giants by the Overland candy company. It was reintroduced to the market by Leaf Brands under the name Whoppers in 1949.

The Company That Makes Whoppers 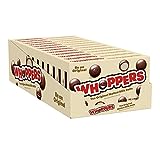 Whoppers The Original Malted Milk Ball, 12 oz Carton (Pack of 2) with By The Cup Stickers
$14.99
Buy on Amazon
Bestseller No. 3

Whoppers package tends to use cardboard as its packaging. This forgoes the now very common foil-style packaging found in other candies, such as the Crunch Bar or Skittles. Whoppers tend to reflect a more old fashion way of packaging candy, using cardboard. Perhaps this is a tribute back to its malted candy roots, but it does give it a bit of an old-fashioned feel.

The packaging has the name of the candy prominently displayed on the front, with the name Whoopers having an image of a single piece of Whoppers candy replace the “o” in W”o”ppers. While the name Whoppers that appears on the front of this candies packaging is always red in color, the candy pieces that replace the “o” in the name will be different colors to reflect the flavor of candy that comes in the box, such as pink for the Strawberry Milkshake flavor of Whoppers or blue for the Blueberry flavor of the candy.

The overall packaging color will also reflect the flavor of Whoppers that are contained inside. For example, Reese’s flavored Whoppers have an orange color box, while the vanilla flavor has a yellow-colored cardboard box for its packaging. The original flavor has a tan color box. Something the packaging may be in a box that looks like a milk carton, though that appears to be more common for the flavors such as Blueberry and Vanilla, and Orange Creme flavors. A square-shaped packaging style is also used and is often seen as the packing used for the original flavor.

Whoppers have been around a long time, and I am getting old now. This candy has been around forever, just like me. I used to eat it when I was a little girl and a color TV was a big deal. I would be allowed to eat a handful of the candy as a treat if I was good and my dad had the pocket change to get me some. Whoppers candy was a big part of my childhood.

I suspect they are a bit smaller now than they used to be, hard to say for sure, but they still taste pretty good. I don’t eat them much anymore but my kids sometimes will get them as a side present on holidays or birthdays. They sure do put a smile on my face thinking about all the good times I had when I was young and would enjoy Whoppers as a treat. It brings back fond thoughts about the past, and how candy seems to help us recall it.

Whoppers is not for everybody, and it may not have the popularity of something like Reese’s Peanut Butter Cups, but it does have its fans. Some people like the way Whoppers melts in their mouth, and enjoy its chocolaty flavor. And while many people do seem to criticize Whoppers, the fact that they have been around since 1939 back when they were called “Giants” shows that whoppers do have a degree of popularity with some people.

Malted candy has always been a bit of a hit or miss with some people, but it does have those that appreciate it. There was a small poll taken on Whoppers where a small number of people on the site seemed to lean towards being Whoppers being considered to be generally favored with those that took the poll.

In July 2019 141g Whoppers candy was recalled by Aldi supermarkets in Australia, both in New South Wales and the Australian Capital Territory. The recall of 141g bars was due to the presence of undeclared allergens. Little information on what allergens specifically were found, but it has been reported that the undeclared allergens could mean milk, wheat, barley, peanuts, and tree nuts.

Fun Things To Do With Whoppers

Dunkaroos is a snack consisting of cookies that you dunk into the frosting. Check out this page to learn about Dunkaroos or to buy Dunkaroos online.

This page includes information about Twix. Twix is a candy bar made from a cookie surrounded by ingredients like chocolate and caramel.

When were Whoppers invented?

Whoppers Malted Milk Balls first rolled onto the candy scene in 1939 as Giants, produced by the Overland Candy Company. In 1949, Leaf Brands reintroduced the candy into the market as Whoopers.