If you’re a fan of Cadbury Chocolate and a fan of cherries, you most likely already know about or would definitely be a fan of the Cherry Ripe candy bar. This delicious concoction is one for the books when you can find it. They are certainly well worth a try and there’s never been another candy bar quite like them in history.

Keep reading to learn more about this candy delight.

The Cherry Ripe candy bar is certainly not new. It’s made by Cadbury Australia and it’s the perfect combination of cherry and chocolate paired together. It’s practically a chocolate-covered cherry and it is utterly delicious.

This candy bar is one of the oldest that have ever been made in Australia. As it turns out, it is also one of their most popular candy bar options too. Cadbury brands has long been known for creating some of the creamiest and tastiest chocolate concoctions around, and this is not exception.

The Cherry Ripe candy bar was first created in 1924 by a confectionary company known as MacRobertson’s. The candy bar uses a combination of cherries, coconut, and dark chocolate to create the perfect blend and it’s nearing 100 years old. That’s quite a long time, and it’s just a small indication of how popular this candy bar remains.

MacRobertson’s was acquired by Cadbury Australia in 1967, about 40 years after the candy bar was first made. They kept the name Cherry Ripe. At the same time, they acquired and kept a few other treats from the same company too. Out of respect for the creators, Cadbury even kept the original logos on the candy bar for several years. They didn’t remove that until about 2002.

If you’re at all familiar with Old Gold, this is the dark chocolate that is used to coat the delicious cherry and coconut mixture. Old Gold was also made by MacRobertson’s and continues to be produced today. This candy bar is all about the indulgence.

Some stories say that this candy bar was named after a popular song from Old English history that dates back sometimes to the 17th century. We will talk about those details more in just a moment.

When Cadbury took over the Cherry Ripe candy bar, they made a point not to change the popular formula in any way. It has the same great flavors and combinations that people loved for 40 years before and have continued to love now for very close to 100 years.

When MacRobertson’s sold to Cadbury, they planted a cherry tree to commemorate the candy bar. While the plant they originally used to make Cherry Ripe is now long gone, that cherry tree continues to grow and be taken care of. It’s a lasting tribute and local residents know the stories behind the tree and the candy bar too.

That space has now been converted into apartments and the cherry tree sits in the apartment courtyard, proudly displayed as an honorary tribute to Australia’s favorite candy bar. Did you know that they produce more than 40 million of these candy bars every single year? That’s a LOT of candy bars and chocolate.

Apart from the song that we already mentioned, there are several other things out there relatable to Cherry Ripe. Here are a few of those things.

The chocolate bar was not the first food product to bear this name but it may just be one of the most significant.

When Was Cherry Ripe Invented?

The Cherry Ripe candy bar was first invented in 1924, nearly 100 years ago. The timeframe makes it the oldest candy bar in Australia that is still in production today. It’s just as popular, if not more popular, than when they first produced it too.

MacRobertson’s was owned by Mr. Robertson. He created an entire chocolate series, which included the Cherry Ripe. His candy bars were good but he also made a point of boxing them and presenting them in memorable ways. He used boxes that were reusable and often kept for things like sewing boxes or children’s little treasure chests.

His boxes always had clever scenes that were interesting and entertaining. He put a lot of work into creating the perfect theme and packaging concept. Some of the stories mention that his scenes may have depicted his own life and children to create the illustrations on the boxes.

His wrappers were also unique and had various scenes or illustrations on them. He would change them periodically. Remember that his purpose was presentation and he did a great job of it too.

Cherry Ripe candy bars are now owned by Cadbury, and they have been since 1967. Prior to that time, they were owned by MacRobertson’s, which is the confectionary company that created this candy bar, as well as many other delightful treats.

Mr. Robertson sold the entire business to Cadbury at that time. The sale included several other popular things that he had created. However, of all of those delights, Cherry Ripe remains the most popular.

Cadbury even honored Mr. Robertson by keeping his logo printed on the wrappers until 2002, long after they had taken over the brand. It was a wonderful way to credit the inspiration and history of the bar. They certainly continued this practice for far longer than they would have ever been required to.

This says just a little something about the brand and how they represented the history behind the candy bar when they took ownership. It wasn’t just a candy bar to them but rather a candy with a history that deserved representation.

How Did Cherry Ripe Get its Name?

Mr. Robertson never fully disclosed what inspired him to name this candy bar Cherry Ripe. There are certainly several rumors, one of which is that the old English song was one of his favorites and inspired the name.

The song was really a Madrigal by a poet in the 1800s. It went a little something like this on the chorus

Full and fair ones

Full and fair ones

Of course, that’s not the entire thing but it gives you some insight into the song and perhaps the inspiration of the name for the candy bar. As we mentioned earlier, there were also some other things that had names like cherry ripe and those might have inspired him too. The secret may never be known but there are many interesting theories that make sense! 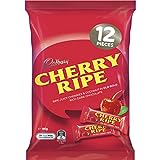 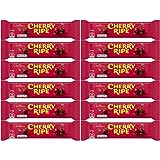 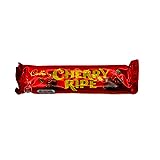 Cherry Ripe is no surprising contender in the candy bar game. With close to 100 years of success, it’s likely not going anywhere anytime soon. The delicious cherry, dark chocolate, and coconut mixture is a fan favorite and continues to be one of the most popular candy snacks in Australia today.

There are many different stories but this one is certainly unique when you think about the creator and the legacy that passed on when Cadbury took ownership. It’s a candy bar well worth remembering and keeping the legacy alive today.