Hershey’s Kisses are a delectable bite-sized candy produced under the Hershey’s brand. There are so many different Hershey’s options out there but kisses will probably always remain one of the highlights of the brand because you can just unwrap a single kiss and pop it in your mouth for enjoyable flavor.

There’s a lot to know about the background of Hershey’s and Hersheys kisses, as well as all of the flavors they are known for. We’re going to dive in and look at just these details just for you!

The History of Hershey’s Kisses

Hersheys Kisses come from the Hershey Company. This chocolate company is known for its mouth-watering candy bars, nuggets, and candy-like Kiss that really stands out to us. This little gem is a teardrop-shaped candy with a flat bottom.

Each small morsel is just the right size to pop in your mouth. They come to you individually wrapped in foil wrappers. Each wrapper also contains a plume, which is a small piece of white paper that sticks out the top and typically has the flavor printed on it in blue ink.

Kisses were first introduced by Hershey’s company in 1907. Their unique shape and size set them apart but other companies quickly tried to copy the popular option. The plumes were not actually added to the packaging until 1921. They were added as a means to set Hersheys Kisses apart from the competitors and originally were stamped with branding rather than flavors.

The Hershey’s Kiss comes from Hershey’s company so let’s take a look at the company as a whole. The official name is The Hershey Company but you may hear it referred to as just Hershey’s, which is acceptable as well.

This company is made in America but has since become a multi-national company. Their success has led them to be one of the leading chocolate manufacturers in the world. They are known for a variety of candy and chocolates but also for cookies, cakes, and other baked goods too.

The primary headquarters of Hershey is located in Hershey, Pennsylvania, which is where they have been stationed since 1894. In the same location, you will also find Hershey Park as well as Hershey’s Chocolate World. The company was originally founded by Milton Hershey, hence the Hershey name.

Now, the Hershey Trust Company owns a majority share and retains a majority voting power. The Hershey brand and a majority of their products are available from their home base in the United States but they are also available in more than 60 countries throughout the world.

Now more about Hersheys Kisses – after all, that’s why we’re here!

Kisses began manufacture in 1907 and at the time they were all hand wrapped with love. They did not start being wrapped by machine until 1921. This is also when the plume (paper strip) was added to the chocolate.

Mr. Hershey acquired a registered design trademark for the conical shape with foil wrapping and a plume in 1924. Later in 1976, they also received a trademark for the foil wrapper. In 1942, aluminum foil was a rationed product so Hersheys Kisses were not produced for a short period of time.

During the halt in production, Hershey’s used their machines to make ration bars for the soldiers during World War II.

Today, Hersheys Kisses remains one of the most popular chocolate options on the market with 70 million-plus Kisses produced on a daily basis. This is one of the few candies out there that still use the original recipe that they started with.

There was a timeframe where miniature kisses were produced and sold as well. These were called Hershey’s Kissables and they were candy-coated. However, this line only lasted about 4 years before it was discontinued.

When Were Hersheys Kisses Invented?

Hersheys Kisses were first manufactured in 1907. At original product, and for many years, they were wrapped individually by hand in the factory. Each Kiss was loving wrapped for people to enjoy.

It was not until 1921 that they were wrapped by machine and the plume that is part of their trademark was also added to the design. Now, over 100 years from the original production, they still use the same formula for Hersheys Kisses.

Who Invented the Hershey’s Kisses?

How Did Hershey’s Kisses Get Their Name?

You might find any number of stories to tell you how Hersheys Kisses got their name but it’s really hard to know what stories are reliable and which ones aren’t. You might easily attribute the name Kisses to the little kiss of chocolate that you just pop in your mouth, but is this really where the name came from.

Some would say that Kisses are named such because the machines make a noise that sounds a lot like kissing when they pop the chocolate piece out and drop it onto the conveyor belt to keep moving. It sounds much like that quick pop of a quick kiss and the name stuck.

We’re not really sure if that is the true story but it sure makes it fun to picture the machine and wonder if this is truly what this fun and tasty candy was named for! 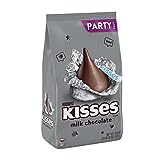 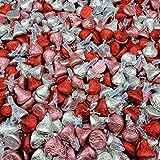 You can also buy Hershey’s Kisses at Old Time Candy by clicking the image below.

While you can certainly walk into just about any store that carries candy and finds Hershey’s Kisses, you can also find them pretty easily online. The first place to look would be the source itself.

Other retailers like Wal-Mart, Target, Dillon’s, and more also allow you to shop online for these products.

A quick search will bring you any number of online resources to purchase Hershey’s Kisses from and you can cater your search to wherever in the world you might be so that you can get your Kisses fixed just about anywhere.

The original Hersheys Kisses milk chocolate formula has never changed. Those that you buy at the store in this flavor are made with the exact same formula as they were originally designed with. There are not many things that you can say this about.

Over the years, Hersheys Kisses has also added a lot of different flavor options and they even have some seasonal flavors and specialty flavors you will see from time to time as well. Check out this list of flavors. Keep in mind some of them may be limited and some may also be seasonal.

Keep in mind that you won’t find all of these flavors all of the time. Some of them are seasonal and some of them were limited editions. However, if you head over to your favorite store, you’re probably going to find multiple flavor choices on the shelf. There are plenty of flavors always available to choose from!

You can find Hersheys Kisses at just about any store out there that carries candy options in their aisles. From grocery stores to large retail stores – if they carry chocolate and candy, they likely have Hersheys Kisses in the mix.

You can also find Hersheys Kisses at some major candy stores as well. Our guess is if you walk into a local store, you will find some variety of Kisses available to you, even in gas stations.

Here are some stores but be aware this is not an all-inclusive list. While these are some major retailers, you likely can find Hershey’s Kisses at plenty of other locations as well.

Remember that Hershey’s Kisses are available in more than 60 countries so they are easily accessible in the United States but also internationally.