This really delicious candy bar has been around for many years and it is sold around the world. This is a Cadbury product today and it is one of the few crunchy toffee-flavored candy bars in existence. This is not a common flavoring or texture profile in candy bars these days, so Crunchie stands out for this reason.

If you have never had a honeycomb-style candy bar, you are missing out. There is something really delightful about the crunchy, melt-in-your-mouth sweetness of this kind of candy bar. You should make sure that you consider trying a Crunchie if you are interested in finding out what a toffee honeycomb candy bar can taste like!

This crunchy and sweet candy bar was first made in 1929 in the UK by J.S. Fry & Sons. This candy bar was made in the unique and crunchy honeycomb fashion that is still familiar in the bar today in order to help the bar to sell in summer. During the era where refrigeration was not common, candy companies struggled to sell chocolate sweets during the warmer months of the year. These items simply melted too rapidly to be enjoyed and they would not keep on the shelves of stores or in people’s homes.

The solution to this dilemma was found for the Crunchie bar, by making the interior layer of the bar a stiff, puffed honeycomb toffee. This toffee resisted melting but was still easy to eat and enjoy. The candy bar is still made with this unique center that is dipped in chocolate and you will get a window into old-time candy making when you decide to try a Crunchie bar.

With refrigeration and other emulsifiers in the mix, candy bars can be made in much more complex ways these days and still be enjoyed in the summer months. The Crunchie is a great example of the ingenuity of candy makers before the advent of these technologies.

This candy bar is currently sold by Cadbury. It sells in the US, Canada, and the UK primarily, but is also sold in other markets. This candy is known as “honeycomb toffee” or “sponge toffee” in Canada. It goes by “honeycomb” or “cinder toffee” in the UK. These are not brand names but are the common names that people use to refer to the candy bar.

Crunchie is sold in a few different sizes from snack size which is a small rectangular bar to king size which is quite large. The most common size is their “single-serve” bar that is the size of a regular candy bar. The UK sold many varieties of this candy bar in the 1990s. These were the original bar, a tango orange bar, a lemonade bar, and a champagne-flavored bar that was just sold on New Year’s Eve in 1999. South African markets sold a white chocolate version of the bar until very recently.

There are also Crunchie flavored ice cream bars, cheesecakes, and different recipes of the bar that include nuggets inside the honeycomb. In 2006, there was a Crunchie Blast ice cream bar that was made that had popping candies inside of the center of the bar. This did not last long as it was not popular overall. Some people claim that the Magnum ice cream bar has replaced this Crunchie bar in the UK and Ireland. But this is not a product that is made by Cadbury.

In 2010, Cadbury added Crunchie Rocks to their lineup which was a mix of chocolate, corn flakes, and Crunchie.  The product is often mistaken for Violet Crumble but that is a totally different bar that is not related to the Crunchie bar in any way.

Where is Crunchie Sold?

Crunchie is currently sold in the UK, Ireland, Canada, Australia, New Zealand, South Africa, and India. It is imported to many countries around the world as well and sold under the Crunchie branding. These locations are Cyprus, Hong Kong, Nigeria, Panama, Lebanon, Saudi Arabia, Malaysia, Portugal, the Philippines, Singapore, Sri Lanka, Nepal, and Tahiti. In the US, the bar is most popular in New York City, but it is offered across the US in certain stores.

Ironically, the US is one of the places where this candy bar is least familiar despite its distinctive ad campaigns. This candy bar is a little simple for some US markets and US candy consumers tend to be drawn to more complex candy bars with more than one filling.

How is the Crunchie Bar Made?

This candy bar style requires a specific process to create it to get the texture right and to make sure that the interior of the bar is not too hard and solid to enjoy. The toffee product is made in large slabs when the bars are crafted and this is done through the use of a highly focused jet of the product that is poured into the sheets.

The candy centers are then cut from this sheet and are dipped in chocolate before being sold. This is a one-step process to craft the center of the bars, but it requires special cutting tools to preserve the quality of the bar centers and to make sure that the edges are smooth when the candy is dipped in its outer coating.

Many people liken this candy bar to a good butter cookie and state that the chocolate on the outside is light and flavorful. This is a candy bar that is not made to be complex and full of lots of nuts and other distractions. The intention of the candy bar has always been to make a simple and unique candy bar that is easy to consume and very portable. The process that creates these candy bars is equally simple when compared to other bars on the market today and it creates this uniquely simple, but very flavorful taste experience.

Have There Been Other Versions of this Candy Bar?

The Cadbury Company did try making a new version of the Crunchie bar in 2000. It was sold under the name, Crunchie tango and was made with Britvic. This was a Tango Orange flavored bar. There have also been the editions that were made for special occasions like the Champagne Bar and a Lemonade and a Mint Bar. There was also a really short-lived 1960s addition called Crunchie Peppermint. In 2013, the brand made an “Endless Crunchie” bar that was made up of 40 Crunchie bars. 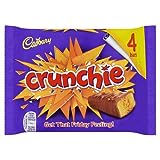 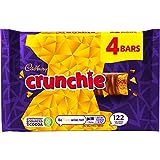 From the Cadbury site:

This is a simple bar that does not contain any unique items or ingredients. This makes for a really simple and delicious candy bar that is not full of hard-to-pronounce ingredients or layers of nuts and other additional inclusions.

Crunchie has not been advertised extensively in the US but in Australia, they are connected with the longest-running ad in Australian TV history. This ad features the ongoing story of the Crunchie Train Robbery and has actually won many awards in Australia. This ad was taken off air in the 1970s but was hugely popular while it was on the air.

In Ireland and the UK, the product has been advertised since the 80s with the slogan, “Get that Friday Feeling”. In the earlier years of the candy bar marketing plans in these locations, the slogan was, “Crunchie makes exciting biting”. Cadbury used the Pointer Sisters to advertise the bar in the early 90s, using their version of the, “I’m So Excited” song. This was one of the longest TV ad campaigns to ever run continuously anywhere and was on TV until 2008.

Many ads for this candy bar in the 80s and 90s used Claymation style figures and lots of action that would appeal to children. The Train Robbery ad is aimed more at adults and was actually quite involved. The train robbery ad uses the golden wrappers of the candy as a play on gold bars and makes the heist sequence seem more likely. This has always been a candy bar that has been marketed with a lot of energy and action in the advertising.

An ad from the 80s that ran in Australia: