Doritos is a popular snack that is enjoyed throughout the world. The snack has a 70+ year history that started as a small suggestion and turned into a famous brand.

In 1955, Frito-Lay struck a deal with Disney to open a restaurant in their theme park in Anaheim, California. It would be Mexican themed and located in the Frontierland section of the park.

The restaurant was named “Casa de Fritos”(Now Rancho Del Zocalo)and it would be a popular ethnic food choice in the theme park. Casa de Fritos also had a deal with local food distributor Alex Foods to supply the restaurant’s tortillas.

This business partnership would unknowingly be how Doritos were created.

One day at Casa de Fritos, a sales rep from Alex Foods was at the restaurant during a food drop off. He noticed that some kitchen workers were throwing out some state tortillas.

When this salesman saw this, he suggested to the workers that they don’t throw away the stale tortillas. Instead, save them, cut them up, add seasoning and fry them.

This was so that the restaurant wouldn’t lose money on throwing out old tortillas and instead make a profit.

One day in the early 1960s, the vice president of Frito-Lay named Archibald(Archie) West paid a visit to Casa de Fritos. He saw that the restaurant was incredibly busy and that they were selling numerous bags of chips.

West would try the chips and instantly loved them and saw that they had the potential to be big. Archie would report back to Frito-Lay the success of these fried tortilla chips at the restaurant.

After his bosses gave West the go ahead and West offered Alex Foods to exclusively produce the chips. Alex Foods agreed and the first mass production of Doritos had begun.

How did Doritos get the name?

Archie West was actually the person responsible for coming up with the name Doritos. Since the chips were golden colored, he wanted to name them something based on the Spanish word for gold “oro.”

He would then mix the Spanish word together with the company named fritos and added a D at the beginning. Naming the snack Doritos, which stuck and has been the name of the snack for nearly 60 years.

Doritos takes over the southwest

To test out if Doritos was going to be a success, Frito-Lay made a soft debut for the chips. Only releasing them in the southwest region of the US.

Alex Foods factory became overwhelmed by the demand for Doritos that they couldn’t make enough of the chips. This forced Frito-Lay to begin making the snack at their larger plant in Tulsa, Oklahoma.

Before Frtio-Lay knew it, Doritos exploded in popularity throughout the southwest region. People could not get enough of these corn tortilla chips.

1966 was a landmark year for Frito-Lay. The company would merge with Pepsi-Cola to create a mega company producing both soft drinks and snacks.

The company could be infinitely bigger if it wasn’t for that lawsuit, but they were still incredibly successful.

In the same year as the merger, Doritos would make their national debut and were instantly a hit. They were the first tortilla chip to ever be sold nationally throughout the US.

From the time Doritos were released nationally, they were incredibly popular to the American public. Backed by a successful ad campaign saying that Doritos were “more flavorful and crunchier” than any competing brand.

Doritos would quickly become one of the most sold chips in the US in just the first two years of their release.

The execs at Frito-Lay were more than pleased with the success of Fritos, but thought they could be even bigger. They thought if flavoring was added to the Doritos that they could become the most popular chips in the world.

In 1968, the first flavored Doritos chips would be released that were taco flavored. People loved them, but they would pale in popularity of the next flavor that was released.

These two Doritos flavors are the top sold flavors of Doritos and staples of the brand. After cool ranch Doritos were released, Frito-Lay was selling the chips in 20 different countries and making $500 million annually.

In 1994, Frito-Lay wanted to do a  total redesign for Doritos. Everything from the design of the bags to the shape and size of the chips.

Frito-Lay would spend $50 million on the redesigns. They would make the Dorito chips 20% larger, 15% thinner with more seasoning and rounded edges.

The reason for the round edges was due to a lawsuit against Frito-Lay a few years prior. Charles Grady claimed the rigid chips damaged his mouth and sought restitution from Frito-Lay.

This complete redesign of Doritos would be another success for Frito-Lay. Doritos would become one of the most sold chips in the world and rack in over a billion dollars in 1994.

Doritos decline in the early 2000s

The 1990s were one of the most profitable times in the history of Doritos. This was thanks to the successful rebranding campaign and the release of various flavors like 3D Doritos.

Unfortunately for Frito-Lay, the success would be followed by a sharp decline in sales and popularity. Sales started to drop after Frito-Lay complied with new USFDA laws and removed trans fats from all Doritos flavors in 2002.

The decline would hit its peak in 2005 when Frito Lay lost half a billion dollars in profits.

To make up for the huge losses, Frito-Lay would do an all out rebranding campaign to boost sales of Doritos. Everything from redesigning the package, advertisement to ethnic markets, and releasing numerous types of flavors.

This rebranding campaign would be a success that would make up for Frito-Lay’s losses the prior year.

In 2013, Doritos would go through another rebranding campaign to redesign the logo. Frito-Lay would launch a huge advertisement billing Doritos as “for the bold.”

Due to PepsiCo buying various fast food chains, Frito-Lay would supply many of the restaurants with food. This included many products for the popular chain Taco Bell.

Taco Bell is known for releasing various items that become instantly popular. By far one of their most popular items ever was the Dorito tacos that made their debut in 2012.

These tacos were so popular that Doritos had to hire 15,000 more employees at the taco shell factory. The flavors released were nacho cheese, cool ranch, and loco. 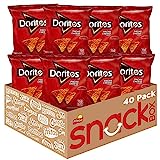 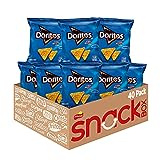 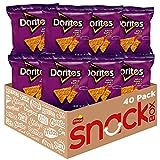 One style of Doritos that gained a cult following were the Doritos 3D chips. A variation of the original chips that were three dimensional in shape was similar to Bugles chips.

They debuted in the mid 1990s and were sold till around 2010 when they were discontinued. Fans of the chips were sad at this news and made petitions to bring Doritos 3D.

This style of Doritos gained quite a cult following since they were discontinued. Then finally in 2021, Frito-Lay decided to bring back Doritos 3D.

Airing a big commercial during that year’s Super Bowl featuring Matthew McConaughey to announce the return of the chips.

As of now, there are over 100 Doritos flavors sold throughout the world in different markets. Here is a near complete list of the flavors currently available.

Today, Doritos is still one of the most popular chips in the world and one of Frito-Lay’s best sellers. Doritos alone make up a giant chunk of Frito-Lay’s revenue along with traditional Fritos flavors.

This snack is sold throughout the world and on just about every continent. Easily 100 million bags of various types of Doritos are consumed daily and this trend will continue for the foreseeable future.

When were Doritos invented?

The original toasted corn chips were released nationally in 1966 and marketed under the Spanish-sounding name “Doritos.”

When did 3D Doritos come out?

Doritos are manufactured by Frito-Lay.

Where were Doritos invented?

They were invented at Disneyland
When a salesman noticed that Casa de Fritos was throwing away stale tortillas, he suggested they fry them for chips instead. When marketing executive Arch West saw this, he loved the idea and convinced Frito-Lay to start selling the chips nationally in 1966.

When did Cool Ranch Doritos come out?

In 1986, Cool Ranch Doritos made their debut and also became popular.

What are Doritos made out of?

How many calories are in Doritos?

Which Doritos are vegan?

Out of all the different flavors of Doritos, only three are actually vegan snacks. These are the Spicy Sweet Chilli, Lightly Salted Tortilla Chips, and the Blaze Flavored Doritos.

How many Doritos flavors are there?

As of now, there are over 100 Doritos flavors sold throughout the world in different markets.

How many Doritos in a bag?